The title of Nadina LaSpina’s new memoir, Such a Pretty Girl, refers to her neighbors’ comments in her hometown of Riposto, Sicily, around the 1950s. Neighbors say that it’s “such a shame” that she’s pretty and disabled. They view disability as tragic or a burden. Religious concepts of charity, pity, fate, and suffering shape their attitudes. At her Catholic school, a nun tells her that she’ll never be happy and suffering is her destiny. Despite her loving parents and grandparents, the ableism from others is traumatic. The memoir shows her journey from an inaccessible and ableist world to self-acceptance and political activism. Its subtitle is A Story of Struggle, Empowerment, and Disability Pride. 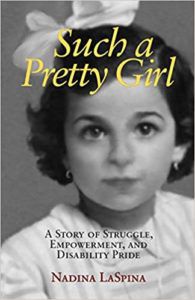 Born in 1948, LaSpina had polio as a baby. When she’s around 13, her family immigrates to New York City. Her father believes that American doctors are the best in the world and might even cure her disability. At NYC’s Hospital for Special Surgery, LaSpina has several procedures and uses a wheelchair for the first time. She’s unsure whether wheelchairs were unavailable in Sicily or her father “didn’t want to see (her) in one” (21). She feels unprecedented freedom and “fell in love—with the wheelchair” (22). Her father, though, wants her to be able to walk. As this section illustrates, even well-intentioned parents’ feelings about their children’s disabilities often differ from the children’s feelings.

At the hospital, LaSpina meets other children of various races and disabilities for the first time. She learns English mostly from her best friend, Audrey. By their early 20s, Nadina and Audrey attend political protests for the Civil Rights Movement and against the Vietnam War. Both Audrey and Nadina have been told that their disabilities make them inferior and undesirable, but Audrey has internalized this message more. After several attempts, Audrey kills herself, believing she’ll never have a happy life.

After Audrey’s death, LaSpina becomes involved in several disability rights groups, including Disabled in Action and ADAPT. She gets arrested many times during protests. These groups are instrumental in helping to pass the Americans with Disabilities Act in 1990 and its precursor in the 1970s, Section 504 of the 1973 Rehabilitation Act. Her friends and fellow activists include Judith Heumann, the first wheelchair user to become a teacher in NYC. Disability pride and activism become important to LaSpina’s life, and she wonders if they could have helped save Audrey’s.

The author skillfully ties her personal experiences into a broader social and historical context. One example is the tension between the social and medical models of disability. The social model posits that inaccessibility disables individuals more than their conditions do. LaSpina’s childhood in Riposto, where she relied on relatives and the nuns to carry her, seems to support the social model. In NYC, which is more accessible, she attends protests, works, and dates, all while using mobility devices. She also sees the merits of the medical model and accepting physical limits when she experiences painful symptoms of post-polio syndrome.

Such a Pretty Girl parses the author’s complex, ambivalent feelings about her birth and adopted countries. While her parents are nostalgic for Italy, Nadina misses her grandparents and cousins, not the inaccessible environment. However, she returns to Italy to meet with Italian disability rights activists, who are horrified that the U.S. doesn’t have a single-payer, universal healthcare system. LaSpina candidly writes about her career, sexual, and medical decisions. She teaches Italian and later designs and teaches an online disability studies course.

Content warning: this book describes multiple instances of ableist abuse and sexual assault, medical procedures, and Audrey’s suicide after several attempts. I found these scenes disturbing but not gratuitous. LaSpina writes that after being conditioned to feel unattractive, she and Audrey often viewed even predatory sexual attention as positive. Ableism can be difficult to unlearn. Many non-disabled people are unaware that sexual predators frequently fetishize and target disabled people.

A disclaimer at the front of the book explains that some names have been changed to protect privacy and conversations reconstructed. LaSpina uses words often considered offensive today, like cripple or handicapped, depending on the era discussed in the book. This puts the changes in attitudes and language around disability in their historical, cultural context.

This is an empowering and feminist book. It shows an immigrant, writer, teacher, and activist’s perspective on pivotal moments in history. In an intimate way, Such a Pretty Girl shows how far disability rights have come in the past 70 years and touches on inequalities that still exist.