There are dozens of literary definitions of the sublime. It’s a concept that varies from literary era to literary era and from theorist to theorist, always subject to the interpretation of both writer and reader. But the aspect I’ve always found most compelling is the juxtaposition of awe and fear, of the beautiful and the terrible, at the heart of the sublime. The romantic tradition—and so too, of course, its more maligned but close cousin the gothic tradition—located the sublime in the sweeping, wild landscapes of the world. These spaces, full of towering mountains, roaring seas, dramatic cliff faces, and deep, eternal forests, are perfect examples of Jonathan Culler’s succinct and effective definition of the sublime as “a relation to what exceeds human capabilities of understanding, provokes awe or passionate intensity, gives the speaker a sense of something beyond the human” (Literary Theory: A Very Short Introduction, p. 77). Most of us have experienced the sublime at some point in our lives: moments when we’ve been presented with something of breathtaking beauty that has made us feel small in an infinite universe, made us aware of our own mortality, or even caused us pain. Horror, then, is a natural home for the sublime, and it is employed to the fullest extent in Tim Lebbon’s stunning new eco-horror, Eden. 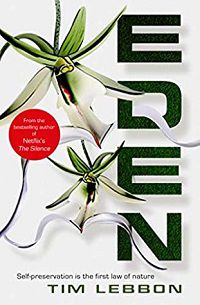 I have tried to keep plot details vagueish, because I would hate to spoil this novel for anyone. But I also think that Eden is such an experience—the tone, the imagery, the adrenaline—that even if you read a detailed plot synopsis you’d still never know what it’s like to actually read this book. Better safe than spoiled, though!

In a near future marred by climate change, a dying earth has designated 13 regions of the planet as Virgin Zones, so called because they are massive swathes of land that have been emptied of human habitation and interference and left to nature. Or that, at least, was the intention. But by its very premise, Eden shows us from the beginning that there is no such thing as a virgin landscape because the simple act of cordoning something off guarantees that humans will always find a way inside. Is it curiosity? Is it arrogance? Is it cunning? Well, the answer seems to be all three, as we learn that humans have invaded the Virgin Zones not only to take advantage of the isolation for criminal purposes but also for the sake of adventure. By creating these zones the world governments inadvertently created brand new “here there be monsters” spots on maps that had, until that point, held no more unknowns for would be explorers. Enter the cast of Eden, who are preparing to be the first team to run the length of Eden and emerge on the other side to set the bar for those who will follow. But hidden motives complicate their mission, and soon an even greater external threat looms in the form of Eden itself.

Because Eden is so much more than a passive setting in which to stage a human drama. In fact, nothing about nature is passive in Lebbon’s novel. And we do tend to think of nature, of our world, as something passive—something we act upon, something we have dominion over. We may be aware that the effect we have on the plant is negative, but ultimately we still view this thing that we have done as further proof that we act, and nature is acted upon. The reverse of this known reality is what lies at the heart of eco-horror: nature becomes aggressive, nature becomes sentient, nature revolts. Nature acts, and we are acted upon. Eden is the embodiment of the new reality. Even before she begins to besiege the members of the invading party, she is already a thing of fear and awe simply by virtue of being the largest, wildest, most untouched place any of them have ever been.

When they enter Eden and make their way to the first ridge line that gives them clear view of the virgin zone, the main character Jenn describes how “The wild land lay before them, vast and beautiful. […] There was a depth to the view that promised both mysteries and pain” (72) and she shivers. Beauty, and the uncertainty—fear, even—of the unknown future. Jenn’s presentiment of the dangers of Eden bears a linguistic resemblance to the many definitions of the sublime, and evoke that sense of awe and potential danger, inviting readers to share with the characters both the wonder of this landscape Lebbon has created and the building sense of dread that foreshadows the horror to come.

But it is when the bodies start to hit the forest floor that Lebbon’s ability to finesse the sublime truly shines. He takes this concept, which is usually associated with massive, sweeping landscapes like those above, and captures it anew in exquisite tiny moments of beauty and fear which still manage to embody the inhuman nature of the sublime. A scene which is perhaps my favorite in the whole novel is only a brief moment, the discovery of a body, in what will become a nightmare for the cast of intrepid adventurers. But it is haunting, beautiful, and permanently embedded in my memory. They find the body of a women leaning up against a tree. She is missing her eyes and her body has become entwined with a rose bush:

“A single rose stem grew from one of the woman’s empty eye sockets, its rich red bloom resting on her left cheek. […] A wild rose grew around the base of the tree and its thin stems penetrated and passed through the woman’s legs, her stomach and left arm.” (177)

It’s horrible. It’s breathtaking. It’s like something from a fairytale told before the Grimms decided fairytales should be nicer. And it is, as Culler promised in his definition, that which “exceeds human capabilities of understanding,” that which “gives the speaker a sense of something beyond the human.” It is the sublime. Awe inspiring and fear provoking. What is more, these early deaths, the rose woman in particular, open up the reader’s understanding of Eden. Since the beginning of the novel it has been suggested that something is wrong with the forest, something threatening, but the bodies are the first tangible proof that nature has surpassed its own limitations.

The rose growing from the woman is in bloom, a full grown plant protruding from what appears to be a fresh corpse. The only damage done to the body is the result of its violent death, and it is dead, but it shows not signs of rotting. The flesh is not decaying. There is no sign or scent of death, only “the warm perfume of the wild rose” (177). Eden has revealed her unnatural face, even her sentience, through this small act of preservation. Where it is humankind’s innate nature to destroy, she has chosen to create.

This scene also illustrates the way in which the sublime is key to the plot of Eden. When you situate the sublime in nature, nature becomes an active thing to fear. A looming potential threat behind a facade of feral beauty. As I mentioned at the beginning, we too often view nature as a passive thing that we act upon, and it is only when nature does something we consider unnatural—whether in fiction or in real life—that nature becomes a force in and of itself. We say it’s mother nature taking her revenge. At its heart perhaps the sublime is a reminder of what we should respectfully fear. In Eden the sublime is a warning to intruders that it is too late to chose respect and fear, and that their own hubris has been their downfall. Humans are not meant to exist in Eden. As with her mythic namesake, humankind’s own transgressions have exiled them from her gates. When they act against nature by entering Eden and disturbing its sanctity, Eden in turn acts upon them. Even in death she acts upon them, creating life from their corpses. Bodies sprout roses, are absorbed into trees, and become part of the very forest they intruded upon and, in some cases, sought to destroy.

There are a lot of ways to write an eco-horror, but most in some capacity will come to rely on the the juxtaposition of the beauty of nature and the visceral images of horror. That’s the appeal, after all. The more beautiful something in nature is, like a rose, the more horror we feel when it is twisted into a source of danger and violence. The taller the mountain, the stronger that belly-deep flutter of fear and amazement when you stare up at the knife’s edge of the peak, and imagine the elation and danger of being at the top and having so far to fall. In Eden the sublime isn’t just about evoking that fear, however. It’s also about giving nature the agency to bring that fear to life, and do something truly monstrous.

Hungry for some eco-horror now? Zoe Robertson references some fantastic reads in her essay about what eco-horror teaches us about ourselves.

Not into the plant side of things but still want to read books that make you feel infinitely small in a vast universe that is at best indifferent (at worse extremely interested) in whether you live or die? You need some cosmic horror.