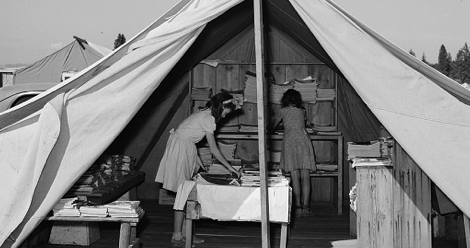 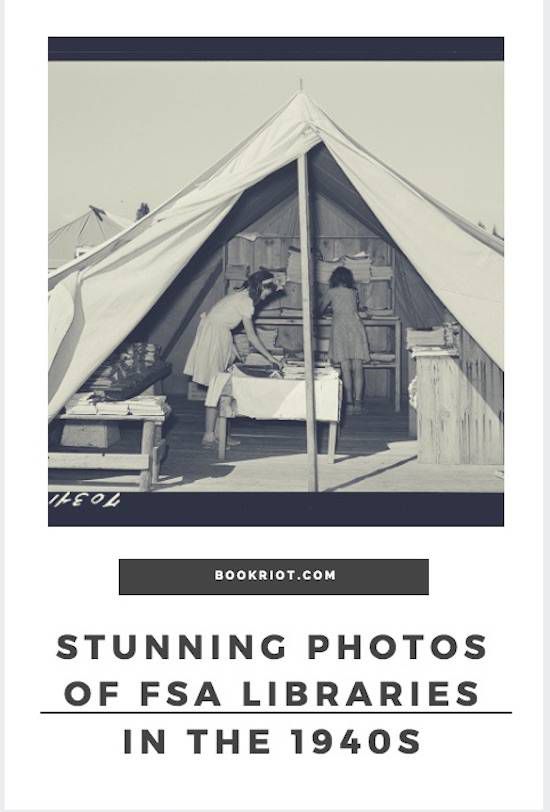 A few weeks ago, I was feeling down and went in search of some “library p-rn” (get your mind out of the gutter! You know what I mean: opulent photographs of gilded libraries stuffed with books, leather chairs, and golden sunlight streaming through windows). Instead, my search on the Library of Congress Prints & Photographs’ online catalog brought me to a series of images of Farm Security Administration (FSA) libraries in the 1940s.

These libraries are not the ornate, over-stuffed halls we often see in “library p-rn” posts. Instead, these are working libraries that served Americans displaced by the dust bowl, moving to work in war industries, or following the crop season. These libraries are plain but still amazing architecturally– they popped up in tents, re-purposed buildings, and modular buildings. They were designed to move with America’s laborers.

Unless you’re a student of the New Deal or the Great Depression, you probably know the FSA because of its unbelievable photography program (Dorothea Lang and Walker Evans both worked as FSA photographers). The FSA did a lot more than support photography. It was the agency tasked with alleviating rural poverty during the Depression, so it’s no surprise that libraries and programs in support of literacy were part of that program. Lucky for us, that photography program created some excellent documentation of libraries serving working and poor people across the US in the late 1930s and through the 1940s.

Below, you’ll find six images from the larger collection of FSA library photos that show off FSA libraries from Maryland to California, in rural areas and urban areas, and in both industrial and agricultural areas.

A photograph by Dorothea Lang of the Arvin camp for migrant workers in California. Image via the Library of Congress.

At the children’s library in an FSA housing project in Middle River, Maryland– a small crossroads in the vicinity of Baltimore– for Glenn L. Martin aircraft workers. Image via the Library of Congress.

Library tent at the FSA mobile camp for migratory farm workers in Odell, Oregon, September 1941. The girls working in the library receive credit in the Junior Campers League for work in the library. Image via the Library of Congress.

In the library of the FSA (Farm Security Administration) farm families community in Yuma, Arizona, March 1942. Image via the Library of Congress.

Example of a modular library designed for the FSA in 1933. This library is “demountable,” having been constructed in slices, at a distance of some 300 miles from its present site at Fort Loudon in Tennessee. It can be easily dismantled for relocation where the need for library services may be greater in the future. Image via the Library of Congress.