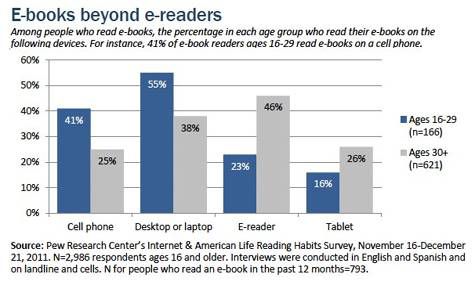 The future of reading looks bright! Americans under the age of 30 are more likely to be readers than older Americans and are starting to embrace ebooks, although young readers are less likely to own a device exclusively for ereading, a new survey from the Pew Research Center’s Internet and American Life Project reports. Readers are also very particular about which books they’ll buy versus which books they’ll borrow, and they continue to make deliberate (but slightly idiosyncratic) decisions about their fluid reading and buying habits.

The study includes data from two different groups: a phone survey of 2,986 people age 16 and over, and an online panel of library patrons between 16 and 29. In total, 78 percent of Americans (and 83 percent of those under 30) had read at least one book in the last year. Most respondents had read a print book, but a pretty decent percentage had read an ebook (17 percent) or listened to an audiobook (11 percent).

The study also looked at the number of books people reported they had read:

The following chart shows both the mean (average) number and median (midpoint) number of books read by members of each age group in the previous year.

The study also found that people of different ages read for slightly different reasons. Younger readers more often read for work/school or to research topics of interest (which make sense, given that most of them are in high school or college), while more older readers say they read for pleasure or to keep up with current events.

One big difference among generations of readers is the devices they use. Almost half of adults over 40 read ebooks on an ereader, while those under 30 often don’t own ereaders and instead read ebooks on a computer (55 percent) or a cell phone (41 percent). This growing acceptance of ebooks or reading on digital devices has led younger readers to say that they’re actually reading more than they used to because they can read in short spaces of time, like while standing in line or waiting between classes.

Sadly, younger readers aren’t immune to the kind of reader shame that gets associated with genre fiction. In the summary of the study, the authors shared this anecdote:

“I am reading romance novels for the first time, because that’s the largest category of e-books at our library, and because nobody can see that I’m reading an embarrassing book with an e-reader,” an e-book borrower in her late twenties told us. “I’d say I’m reading more, but part of that is because I want to make the purchase of the e-reader worth it. Also, it fits easily in my purse so I have it with me most of the time. I try to read instead of playing games on my phone, now, which is harder to do with physical books.  Also, reading in bed is easier, because I can lay on one side without having to figure out how to move the book every page to see either the left/right page.”

Additionally, the study found that the vast majority of readers get book recommendations from family, friends, and co-workers, rather than a librarian, online bookstore/website, or bookstore staff. I have to wonder about this statistic, though. How would you account for book bloggers or other online source for recommendations from readers (rather than professional critics, which were not asked about because the study authors assumed that critics would play into all of the other options… a faulty assumption, I’d argue)?

Luckily for authors and publishers alike, most readers of both print and ebooks said they prefer to buy their own copies of books rather than borrow them. The same can’t be said for audiobook readers, who more often borrow than buy (which makes sense to me, given the often much higher price tag on an audiobook). About 45 percent of young readers surveyed bought the last book they read, while 24 percent borrowed from a friend or family member and 17 percent borrowed from a library.

However, an online panel of ebook borrowers who were surveyed had a pretty different response from the rest. These respondents said they were very particular about which books they would buy, saving their money for “investments” they would like to re-read or share with others. This section also highlighted my favorite result from the study:

“I only buy brand new print books if it’s a series I collect, or a book that has special meaning,” a college-aged panelist in a large metro area wrote. “I will often buy older books from a used book store so that I can read them and sell them back. I buy e-books if it’s a book that I’m looking forward to but not necessarily one that I need to add to a collection.” He added that with some series, such as Harry Potter and Games of Thrones, he would purchase both the print and e-book editions.

Later in the study, the researchers quote another college-aged panelist who describes her fluid reading habits:

“I go to the library just as much as I used to and read just as much printed word as before. My e-reader is a last-resort, back-up deal for me. I need an electronic book while I’m flying because I love to read but a printed book in a plane makes me sick. Another example is that I am moving this week, and have been packing up my personal books and returning my library books, but I still want something to read. In that case, an e-book is invaluable. I’m in the middle of Bleak House by Charles Dickens right now, but as soon as I move to new place I’m going to pick up a print copy from the nearest library.”

Ever since ebooks started to become more popular, I have hoped that publishers would start to offer a print/ebook bundle option, where you could “upgrade” your print book purchase to include an electronic copy for a few more dollars. That would provide both the convenience of an e-book and the aesthetic appeal of a print book… am I the only one that wants this?

The study is relatively extensive, but the online summary is a pretty easy read. I highly suggest taking some time to skim it over and see how well their result jive with your own reading habits.

(For other analysis of the study, check out this story from NPR and The New York Times).