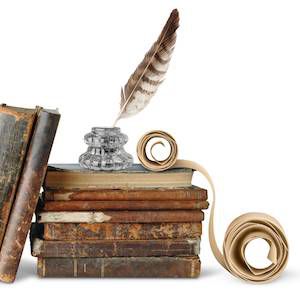 [The following fragment (once part of a scroll) was recently discovered when construction workers were razing a timeless architectural wonder somewhere in Greece.]

“But the scroll,” you say, “the scroll has been around for millennia! How could people just abandon it? It’s the ONLY WAY to read!”

The times are a-changin’, though, as several recent studies show. Apparently, one out of every three readers uses a codex, rather than a scroll, to get their daily literature fix.

Those who made the switch claim that the scroll is burdensome and tedious; the codex, on the other hand, lets you flip back and forth between pages, transport easily, and carry in a small case.

Many readers, though, cling determinately to their scrolls. As one woman explained, “I’ve always read this way, and I don’t see a reason to switch. And those codices- they’re just the latest bauble, just a silly trend.”

Detractors counter that scrolls turn reading into a marathon. One man whom we interviewed claimed that a scroll he recently bought “is too long: by the time I had reached the end of it, I was on another continent. And no, I wont double-roll.” “Double-rolling,” itself, is quite a thorny issue.

And yet, as we all know, scrolls and codices have coexisted for years, mostly in harmony. After all, scrolls are usually used for literature, history, legal documents, and sacred texts. Codices, born of wax tablets bound together (later replaced by parchment), are for notes, lessons, etc.

Many people have nonetheless turned to codices for most of their reading needs because they appreciate how handy and transportable they are.

But you’ll never be able to convince some people. “Codices will be the death of great literature,” one scribe told us. “I can never ‘turn’ a page without ripping it! And what about us scribes? With codices becoming more widespread, everyone’s trying to get in on the game. Our work has become less valuable.” (Note: I saw a small codex peeking out from beneath his shirt).

What does this switch to the codex mean for the future of reading? Of course, we cannot see that far ahead, but the people we spoke to feel very passionately, whichever side they take.

Well, there you have it, folks. Which do you prefer- scroll or codex?

May the best reading device win.