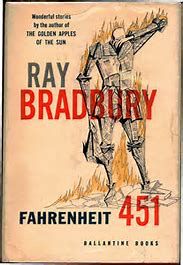 HBO’s enticing trailer for its upcoming film Fahrenheit 451, adapted from Ray Bradbury’s dystopian classic novel, appears to adhere closely to the book. There is the fireman Montag, the book’s hero, at the beginning of the tale, as he completes fireman’s duties of setting fires to the homes of anyone who harbors books, claiming in a daze, “I love to burn.”

And then there is Montag, the viewer feeling his terror and fear as he hurtles through the city’s rain-slicked streets trying to escape certain doom after he confronts his authoritarian society.

These scenes from the trailer are an enticing tease: the brooding music and stylish noir science fiction settings of Fahrenheit 451 are dominated by hanging television screens with a calm male voice repeatedly saying, “Yes, a little knowledge is a harmful thing.”

This is Fahrenheit 451: one of the seminal books of the twentieth century that presents a chilling cautionary tale regarding a society that foregoes reading and knowledge in favor of non-stop television entertainment that lulls a person into a contented complacency.

Published in 1953, Bradbury’s eerie prescience on the rampant abuse of television remains remarkable. The book is often placed alongside George Orwell’s 1984 and Aldous Huxley’s Brave New World as foretellers of a totalitarian future that we are in danger of bringing to fruition.

In these days of the current president of the United States calling for a book to be banned simply because it makes him uncomfortable and these days of that same president being proud of his illiteracy, the need for Fahrenheit 451 is needed now more than ever.

But are young people reading? Is Fahrenheit 451 doomed to be burnt at some future time because the next generations have rejected learning—simply because such learning might make them uncomfortable and discontent?

Two years ago, when the Los Angeles Public Library chose Fahrenheit 451 as their City-wide Book Club choice, I participated with the highest glee shared by the most enthusiastic Book Rioters.When I received my complimentary copy of Fahrenheit 451, courtesy of the L.A. Public Library, the Palms-Rancho Park Branch, which was also my childhood library refuge and also the branch library of Ray Bradbury himself, I realized the synchronicity. I would be in a Fahrenheit 451 book discussion held in the Ray Bradbury Conference Room at Ray Bradbury’s neighborhood library that he frequented for nearly sixty of his ninety-one years. I was certain that the Palms-Rancho Park librarian, Maggie L. Johnson, would also have good stories about Bradbury since he was a fixture at the L.A. Public libraries. I always wanted to know more about Bradbury and also to ask another burning question of the English middle-school teacher, Jennifer Hunter, who would also serve a discussion facilitator.

Ms. Hunter’s white jacket, uniquely painted in reds and golds and yellows, ornately sequined and picturing Montag and the Salamander and books burning and falling, was an unmistakable homage to Bradbury’s novel. That stellar jacket answered most of my questions about students reading Fahrenheit 451 and showing any enthusiasm for reading itself.

The jacket was one student’s art project for the novel. Ms. Hunter also described various mixed media projects her students had done with great enthusiasm after reading the book. For her students—at a public urban middle school where nearly half of the students live near the poverty line—Fahrenheit 451 has remained one of the all-time favorite books, as it has for secondary students nationwide. Fahrenheit 451 is a perennial favorite to read and teach.

Students become readers when the material they are given reflect parts of their everyday lives. Bradbury’s prescience on the possibilities of technology is one lure for the student reader.

Montag’s wife Mildred will only reluctantly remove her prized seashell headphones to disconnect from the television, and on the few occasions when she does, Mildred makes sure to say a heartfelt goodbye to her family, aka characters on the television.

The tremendous television sets that dominate Fahrenheit 451 reflect our own apathy and indifference—which allows governments to wage endless wars without any public input. Our technology has begun to consume us—just as it had in Mildred’s cloistered world.

What happens when our world is threatened? For Montag, it meant inevitable escape from his world after Mildred’s unhappiness had her picking up the phone to report the cause of her distress: her husband read a poem to her from an actual book.

For teachers, themes of technological encroachment and our relationships within that society lend itself to myriad essay and mixed media projects:

Have Smartphones replaced boredom? Is that good?
Is Social Media making you less social?
If you knew your neighbor (and good friend) was hiding books, would you report him to the authorities?

Students at this critical age, on the verge of becoming lifelong readers and learners, begin with Fahrenheit 451. Bradbury’s masterpiece gives a perpetual light for the here and now and for the future to connect books and people.

Just one more facet of the teaching strengths of Fahrenheit 451: for many of the public school students, reading Fahrenheit 451 is the first time they are introduced to Aristotle, Dickens, and Tolstoy.

Fahrenheit 451 is about us: the citizens who would much rather relinquish their rights to an open society for the realization of constant gratification and conformity. George Orwell’s 1984 utilized television screens to dominate and indoctrinate their citizens; in these same outsized television screens are an opiate: the citizenry would much rather be soothed. Television keeps one from thinking at all.

For sixty of his nearly ninety-one years, Bradbury would leave his modest pastel-yellow house and visit Palms Rancho-Park Branch. Bradbury was nearly blind and wheelchair-bound in his last few years, but as soon as he was in front of his library audience, Bradbury became electric and fully alive; a perpetual force of brilliance as he told his tales.

One place to ensure a reading future is to value libraries—fund them and use them. The public libraries are where Bradbury received his education after graduating in 1938 from Los Angeles High School. He devoured the classics and contemporary writers. Bradbury’s distress over the book burning at the ancient Alexandria library made a tremendous impact on his work.

So, after that trip to the library and a few hours spent reading, be sure to watch the HBO film adaptation. The colors and sound will astound you, but it is with words that we begin to change ourselves and the world.