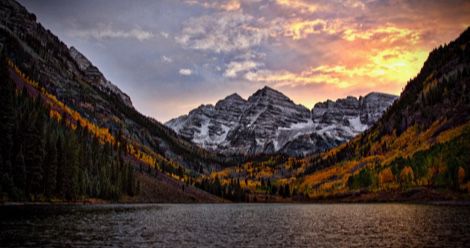 I am a second-generation native Coloradoan. The essence of the place I love cannot be bought at REI. Instead, the West I love is a place of beat-up pickup trucks, air as sharp and clear as the cry of a pika, and people who are as wild and fierce as the mountains in which they live.

I now live in the Midwest, mostly by choice and partly because Colorado is a state I have been priced out of. When I read about the place that I am from, I want more books that reflect the harshness of the Colorado that is too often glazed over by subdivisions and timeshares. I want prose about Colorado to remind me of what my bones felt like as I cracked open frozen water buckets for my grandmother’s horses deep in a wintry canyon. When I read about Colorado today, I want the language to make the hair on the back of my neck stand up the way it did when one night I saw a wildfire ooze dangerously down the ridge near the farmhouse where I slept.  A story of the Rockies should leave me aching in the strange beauty of a derelict mine shaft framed by alpine tundra, or fill me with wonder like petroglyphs near Grand Junction.

If a book about Colorado or the rest of the West doesn’t do this, then why bother?

Some books and authors do actually capture the West well enough.  Little Britches is one of these. This old YA book takes place near my grandmother’s farm and chronicles a kid growing up on the front range in 1906. I still feel like weeping when I think about the horse in this book. Other safe bets are Tony Hillerman’s novels, which capture the quiet toughness of the landscape while still weaving a good mystery.  There is, of course, also almost anything by Terry Tempest Williams, a Utah native who always reads like a westerner even when she writes about other places across the ocean, as well as Pam Houston, whose lyric words have the ragged joy of highway fireweed.

Recently, I found two books that rang true to the West I love. One was old and one new, but both understood the need for space, the power of place, and the grit of women who call these places home.

The First is Rough Beauty: Forty Seasons of Mountain Living, a new memoir by Karen Auvinen that came out this June. At first, I was leery. I listened to the audio sample before investing in the rest of the book, nervous about what artificial platitudes about mule deer and mountains might lurk there.

What I found instead was a book that was as full of gritty wonder as a hike on an old access road: Auvinen’s writing was crisp and beautiful, and her descriptions of the West I have left behind made me hurt with homesickness. Her work is also a testament to many Colorado residents who, like the pioneers and the Utah and Cheyenne, came before struggle tooth and nail to stay in a place that makes their souls whole.

It is also a testament to other things that reminded me of a Colorado life. One is fire, a reality often not spoken of by the visitor. Auvinen’s book opens with her losing everything she owns—including years of writing—to a house fire.

The other was a good mountain dog. Elvis, Auvinen’s husky mix, is central to the book and reminded me of other dogs that once followed me on mountain deer trails. I thought of Sally, my grandparents ancient Dutch Shepard whose favorite thing was long walks in the sagebrush with us kids behind the house in Leadville. Sally, however, was not nearly as naughty or hilarious as Elvis, but the two sure would have loved the snow together.

The second book is O Pioneers! By Willa Cather. This like many books is one that has sat in my “To Be Read” pile for far too long, and in between book reviews I finally found time to read it.  I had first read Willa Cather as a teenager, and I loved the author’s obsession with the vast expanses of Nebraska, and how this state that is too often depicted as tame to the point of boredom is painted to be just as wild as the seascapes of Alaska or the Chilean Andes. What I found in O Pioneers! left me astounded. This book was more feminist than most books I had read about feminism. It also painted an immigrant experience in a rough, gritty, and complicated but loving way.

Its central character, Alexandra, reminds me not only of Karen Auvinen but many of the western women in my life.  From sheer will, Alexandra carves a living out of the prairie grass. Both Alexandra and Auvinen succeed despite many of those around them who quake in terror that woman can stand on their own. Perhaps strong women and open spaces are made from the same stuff—both mysterious, both filling us with awe.