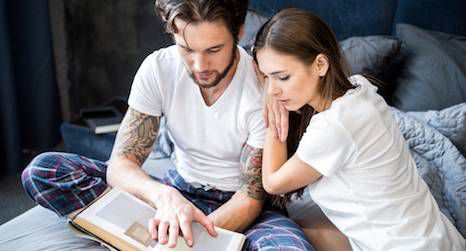 I spend a lot of time looking at a screen. I work, I read, I write, I watch, I research, I communicate, I like, I comment, I browse, I zone out. Or of course, like many of you dear readers, my face is often in a book. These things don’t typically lend themselves to quality time with my partner (for us, we do not count watching a show or movie with each other as quality time). My partner also loves to read, but reading as adults is often a solitary enterprise. Sure, you can read the same thing and discuss it (which we often do) but it still means laying in bed next to each other with our faces in our own books. Which, we are very happy doing but we still don’t count it as quality time together.

So about a year and a half ago we started reading to each other at bedtime. We’ve tried novels but those don’t seem to work for us. Instead, we have had much success reading short stories, fairy tales, and the occasional erotica. We especially enjoyed reading our way through Philip Pullman’s Fairy Tales from the Brothers Grimm: A New English Version and also The Tales of Beedle the Bard by J.K. Rowling. We’ve come to look forward to these evenings where our phones are on silent and sometimes we even head to bed early. Through these storytimes, my partner and I have learned more about each other, ourselves, and have grown even closer.

Initially, we switched back and forth between who would read and who would be the listener, but my partner learned that 1) he really enjoys reading aloud and 2) he’s more likely to fall asleep when I’m reading, which, I don’t really know how to take that and if it’s even a compliment. I have learned that my partner has an endless supply of hilarious voices and pretty terrible accents. I enforce the rule that if he started out with a voice for a story, he had to commit to it all the way. If he wanted the evil stepsisters to sound like pre-Henry Higgins Eliza Doolittle, that’s fine, but I expect it throughout the whole story.

It was also reassuring that we have similar opinions of certain stories. We both cheered when the princess throws the frog against the wall (no, she does not kiss it to break the spell). We both cringed when we were introduced to the queen who built twelve coffins for her twelve sons who were STILL ALIVE. We both admit that we’d totally be drawn to a cottage made of candy, mortal danger be damned. We also both agree that The Musicians of Bremen is one of the greatest fairy tales of all time which prompted us to say, after every other story that follows, “it was great, but it was no Musicians of Bremen.”

When we got around to reading (rereading, for me) The Tales of Beedle the Bard we quickly learned that there are words in the Harry Potter universe that we pronounce very differently from each other. One such word is Winzengamot, which my partner pronounces “WHY-zin-guh-maht” while I pronounce it “wih-ZEN-guh-moh.” Upon reading the full name of Albus Percival Wulfric Brian Dumbledore, we cried from fits of laughter and decided that henceforth, we will just call him Brian whenever he was mentioned in the rest of the book.

Reading aloud with your partner isn’t for everyone. I constantly interrupt the stories with jokes and questions and my partner is endlessly patient. It could be difficult to find things you both enjoy and some people may not want to put in the effort. Or maybe you just don’t like reading aloud or being read to. But I recommend trying it out if you’re willing. It has such great potential for laughter, conversation, and connection. Making time for each other and for books in this way is something that has become a part of our daily routine and something to look forward to even on the most trying of days.