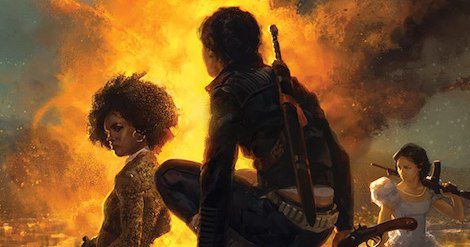 In 2016 I joined #NoDAPL, the movement to stop the Dakota Access Pipeline. I published articles, moderated a presentation, attended a webinar, and virtually cheered on protesters. Unfortunately, the pipeline was still constructed on Sioux sovereign land, and others have followed. Dejected, I retreated from the community. 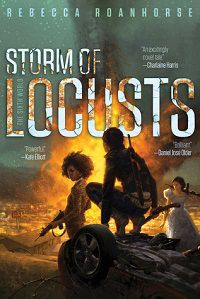 Then in 2018, I read the Fantasy Trail of Lightning, Book One of the Sixth World, by award-winning indigenous author Rebecca Roanhorse. I tore through the thriller, recommended it on social media, and followed Roanhorse on Twitter. Trail of Lightning reignited my active support of indigenous people. (Make sure you read it, too! It’s okay if you don’t before you read Storm of Locusts, Book Two of the Sixth World, because Roanhorse gives a refresher throughout the book.) 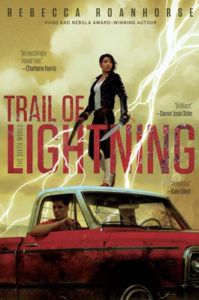 Storm of Locusts takes us through apocalyptic Navajo Nation, further and deeper than we went in Trail of Lightning. As usual, in the beginning Maggie Hoskin is basically alone, hanging back from relationships and acceptance. But when acquaintances convince her how much others need her, she ventures out of her comfort zone- beyond the safe haven of the Wall- to save her newfound love Kai from the enigmatic White Locust.

Storm of Locusts brings back old characters like benevolent medicine man Tah, and introduces a new set of dynamic ones. Maggie is still fighting monsters, both external and internal, but this time she opens herself up to a team. I’d been highly anticipating Storm of Locusts to see what adventures heroine Maggie had been up to, and was especially excited once I saw her badass girl gang on the cover. The girl gang consists of: Maggie, the sword-wielding antisocial leader; Ben, the teen with magical clan powers like Maggie brought on by trauma; and Rissa, the redhead who’s not afraid to use her fists.

I enjoy dystopian action heroines, especially Katniss from Hunger Games, who ushered in the jaded loner she-ro trend. But Storm of Locusts’ all-female squad was a trope I didn’t know I needed, and will expect from now on. Even better, members of this trio are indigenous, representing the Navajo nation, or Dine’.

With Navajo traditions like wearing moccasins, eating fry bread, and building hogans, Roanhorse incorporates this culture amidst the action and suspense that literally had me clutching my chair. Further, amidst the fight scenes and sarcasm, Roanhorse addresses environmental catastrophes that led to the drought-ridden wasteland. Storm of Locusts lists fracking and oil drilling as some of the “man-made horrors” that led to the apocalyptic United States.

In recent years, because of the United States government, the indigenous community has had to deal with extreme hardships and disappointment. Now, The Sixth World series is ushering in a well-deserved age of victory and acceptance.

In real life, as in the book, despite the vast destruction of natural resources and innocent lives, there remains strong female leaders and advocates to fight for justice. The popularity and success of Roanhorse’s books sparks hope in me that indigenous people will rise and still make their mark.