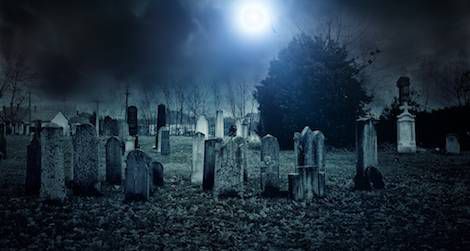 It’s normal for kids to be obsessed with death. At least, this kid was. But not death like adults think of death; death like kids think of death: ghosts, devils, angels, zombies, vampires, the grim reaper. Death is fantasy rather than tragedy. Kids have heard adults whispering about it, but the meaning is still abstract.

To both kids and adults, death might seem like a monster at the end of a tunnel. For adults that monster is metaphorical, but for kids that monster is real. Death is a creak from the attic at night. Death is an undead corpse with decayed skin, tattered clothes, and a shuffling step. Death is cold and has fangs. Death is fiery with horns. Death has wings. Death is black. Death is scary. But not cancer scary. Death is a monster under the bed scary. An addicting kind of scary. And some kids want to know more.

Here are 9 books for your morbid kids: 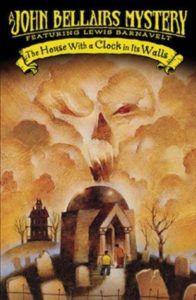 The House With a Clock in its Walls by John Bellairs

I own almost all of John Bellairs’s books. I found one of his books at a used bookstore and bought it because it sounded good, but then realized it was part of a series, so I bought all the other books in the series too. I then realized that he had more than one series, so I bought his other series as well. Why? It’s inexplicable. BUT thankfully my manic moment brought John Bellairs into my life, because these books are great. I would definitely start with The House With a Clock in its Walls, which is part of the Lewis Barnavelt series.

The Half-a-Moon Inn by Paul Fleischman

This book messed with my mind when I was a kid. I can still remember how physically terrified I was after reading it. The setting: a small isolated inn in the middle of a terrible blizzard. The characters: Aaron, who is mute and trying to find his mother, and Miss Grackle, a terrible witch who forces Aaron to remain at the inn and be her servant. Aaron, being mute, can only communicate through writing. But Miss Grackle makes sure that there is no paper for Aaron to write on. It’s claustrophobic. It’s atmospheric and insidious, and I’ll never forget reading it. Really creepy. 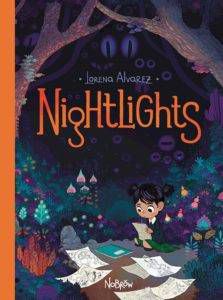 This is a graphic novel from NoBrow Press, which is one of my favorite children’s book publishers. Their books are gorgeous. This book is gorgeous. Unfortunately, the illustrations outweigh the story, but the story is still captivating and creepy and would be a great book for a kid that loves art, and of course—horror. 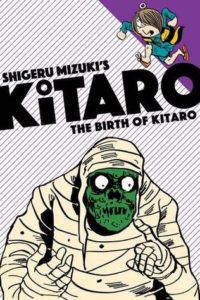 The Birth of Kitaro by Shigeru Mizuki

This is a collection of comics that were originally published in the 1960s. It is about the yokai, which are supernatural beings in Japan like demons, ghosts, or monsters. If your kids love manga, I think they’d really dig these books.

This was one of my favorite books last year. I adored it. It’s YA, but don’t let that hold back younger readers. Frances Hardinge is a great storyteller, with a knack for telling dense, creepy stories. Instead of The Lie Tree, I could have included Cuckoo Song, which has creepy dolls and changelings, but The Lie Tree is so much better. This was one of my favorite quotes: “She had tumbled off the safe, hallowed shore of childhood, and now she was in no-man’s-water, neither one thing nor another, like a mermaid. Until she dragged herself up on the rock of marriage, she was difficult.” Hardinge’s books exist in the middle ground between middle grade and young adult, but I think her appeal is universal. I highly recommend anything she’s written. 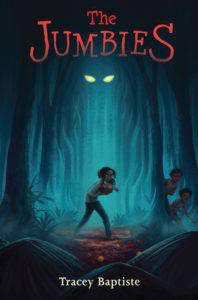 I borrowed this book from the library and had it out on the dining room table. My niece saw it and immediately picked it up and asked me what it was about. I read the front cover flap, and her eyes got the glow that many book lovers get when they hear the synopsis of a book that ticks all their boxes. This book is based on the Haitian folktale “The Magic Orange Tree.” The cover alone, with the glowing eyes and dark woods, would be enough to catch any morbid child’s eye.

Like the games light as a feather, stiff as a board or cat scratch, Schwartz’s scary stories were a slumber party staple. They were also the most checked out books in the school library. In addition to the natural horror of the stories, Stephen Gammell’s illustrations add a greater element of eeriness to the overall sensory experience of Schwartz’s stories. 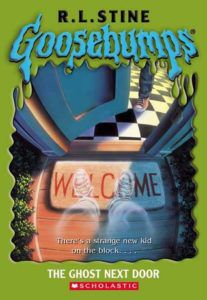 The Ghost Next Door by R.L. Stine

This is the tenth Goosebumps book, and the scariest. After reading it, I’d wake up in the middle of the night to touch my bedside table, just to make sure my hand didn’t penetrate its solid surface. Like The Half-a-Moon Inn, this book tormented my brain. It’s a book I’ll never forget reading. I won’t give anything else away.

Most kids in the United States get snow days, and scary stories are great to read on a cold winter’s day. The set-up: while the kids are outside sledding, warm some blankets in the dryer, put some hot chocolate in the crockpot, and stack these books beside the comfiest couch. If you do this, I can guarantee when the kids come back inside you won’t hear anything from them for the rest of the day.

If you are looking for even more scary stories for your kids, check out this great list.

Also, if you’re looking for more serious books about death for your kids, here’s a list of titles that will hopefully help you out!