This Riot Recommendation listing your favorite stories about women in WW2 is sponsored by The Huntress by Kate Quinn. 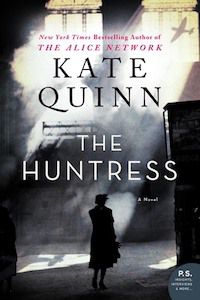 “If you loved The Tattooist of Auschwitz, read The Huntress.” —The Washington Post Already Named one of Marie Claire’s Best Women’s Fiction Books and One of BookBub’s Biggest Books of the Year! From the author of the New York Times and USA Today bestselling novel, THE ALICE NETWORK, comes a fascinating new historical novel about a battle-haunted English journalist and a Russian female bomber pilot who join forces to track the Huntress, a Nazi war criminal gone to ground in America.

From nonfiction gems like Margot Lee Shetterly’s Hidden Figures to historical fiction like Lauren Wilkinson’s American Spy, women’s stories throughout history are finally taking center stage and we can’t get enough. That’s why we asked you to share with us your favorite stories about women in WW2. We started with Transcription by Kate Atkinson and you continued with a great list of nonfiction and historical fiction:

The Unwomanly Face of War by Svetlana Alexievich

A Thousand Sisters: The Heroic Airwomen of the Soviet Union in World War II by Elizabeth E. Wein

The Only Woman in the Room by Marie Benedict

The Light Over London by Julia Kelly

The Parisians by Marius Gabriel

The Beantown Girls by Jane Healey

The Lost Girls of Paris by Pam Jenoff