As I write to you, I have just come from The International Sherlock Holmes Exhibition, which has recently landed at the Pacific Science Center. I am fairly awash in hyperactive excitement about the whole thing. It’s amazing I’m writing this, because honestly, it’s amazing I left at all.

I am a tremendous Sherlock Holmes fan. I have no idea how it even originated, it goes back that far and that deep. It dovetails nicely with my love of Star Trek (Mr Spock calls Holmes his “ancestor” in one sly reference) in that there a respect and need for logic, thoughtfulness, and skills, and I am very fond of those things. Additionally, it ties into my ongoing love of Victorian culture and history (an obsession I acquired from long reading of Charles Dickens biographies).

I adore Sherlock Holmes novels, and anthologies of stories, and movies. Elementary remains one of my favorite shows every week. I was a fan of Sherlock for a while, although I’m afraid that’s kind of gone away.

What I’m saying is, I was giddy about visiting the Exhibition, which offered to not only explore Sherlock Holmes and his stories, but also the world which he and his creator occupied.

I was slightly nervous, because some exhibitions promise a lot, but then have very little of interest actually on show, and I really didn’t want that to be the case here. As it turned out, I needn’t have worried because holy buckets was there a lot of stuff. I can’t convey how much! It’s divided up into sections, and I wasn’t even out of the first section before I was hyper and exclaiming loudly at things (“Oh! Look! Look! a whole section on Dr. Joseph Bell, who Conan Doyle admired and who was a very great inspiration for Holmes, and a really explicit inspiration for Dr. House, and– no, wait, look! An Edgar Allan Poe detective story! Oh wow! Oh! Wait! Newspaper broadsheets from the time, about the Jack the Ripper murders!” And so on.) 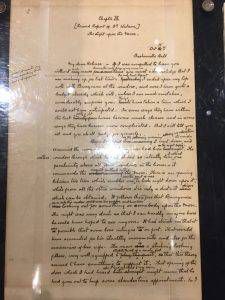 A page from The Hound of the Baskervilles

The first section was about the man, a brief look at Arthur Conan Doyle, his medical background and storytelling influences. The most jaw-dropping thing for me wasn’t even the first-edition issues of The Strand magazine which they had on display, it was the handwritten manuscript pages by Conan Doyle! I got to stand there and read his (impeccable) handwriting for a page of The Hound of the Baskervilles.

If I have one criticism of the Exhibition, it was their insistence on keeping these things in well-monitored glass cases, forcing me not to bring the pages home but leave them there. Hmph.

Next up, we had a section about the world. In here, we had sub-sections just looking at bits and oddments from Victorian London. A section on Scotland Yard, a working telegraph with two morse-code-tappers (I know, I know, they probably have a name…) at opposite ends of the section, so you and a friend could tap SOS back and forth because come on, honestly, that’s all any of us know. A store-front of beauty products, a section to examine different soil samples and so forth. There was far more than that, but if I list everything that was cool, you’ll feel like you don’t have to attend, and then I’ve done a bad thing indeed. 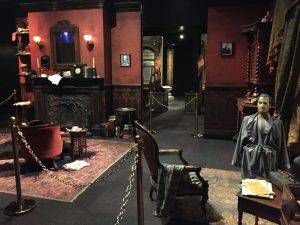 Half of the recreation of the sitting room at 221B. (Note the wax dummy with a bullet hole in its forehead.)

Next up, we visited Baker Street where they had “recreated” the sitting room of 221 B. It was stuffed full of artifacts and replicas, and it was glorious. From the overstuffed desk that was Watson’s (with chewed up cigars in an ashtray, even) to a big VR shot into one wall, to Holmes’ violin, I stood there for ages, probably being in the way, just trying to absorb the whole scene.

Partially, this was because I’m such a Holmes fan, and it felt like I was there, but also because as I said, I’m fascinated by Victorian London, and to try and stand there and mentally shut off the modern world around me and think, for a bit, on dwelling just there…it’s a fascinating effort. Like going to one of those historical reenactment towns. If you can get past the weirdness and get your head into just the right space, for a moment you can imagine what it was like, and that moment is amazing.

And then, there was a murder.

Quite a lot of the exhibition from there is another detailed sitting room, in which a crime has taken place. Blood splatter on the wall, shattered bust of Napoleon, and so forth. Between an Edison Cylinder of Holmes talking to you, and then a lot of little stations, you can slowly puzzle through the small notebook they give you and work out clues at a lot of stations (go to the slaughterhouse and spray blood everywhere! reassemble Napoleon! drag some dead legs! seeds!). On your way out is a station that has the right answer, and you find out how good you are at solving a crime (on a scale of “Holmes” to “Police Academy” I was “Inspector Gadget”)

After that, we had a TV-and-Movies section, and I don’t need to give you the rundown here, because we all know how these work. We had lots of props from the Robert Downey Jr. Sherlock Holmes movies (which was cool, because I’m a big fan), and a bunch of stuff from Elementary (which was REALLY COOL you guys), and then onward to the gift shop.

The gift shop was…a gift shop. You can explore that yourself when you visit (and you are visiting, aren’t you). I will say that they had an immense shelf of Sherlockian books, and some of them were really interesting. 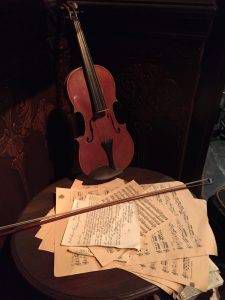 Holmes violin! Except not really I guess! It’s super confusing!

But of course, they weren’t. Because there’s no such thing. Because Holmes and Watson aren’t real. It’s odd, though, how real they seem. They have a pervasive place in our pop culture, they have had an effect on the world around us, they have a history and enough of a life that we can replicate it in a traveling exhibition. The only thing they actually lack are physical bodies. And even there, they’d be dead anyway. It’s fascinating to realize that in a way, fictional characters from the past can be just as real and influential as real people from the past.

Anyway, that was as close as I got to a deep thought while running around shouting reasonable things like “Oh wow look at human skin with a stab in it!”