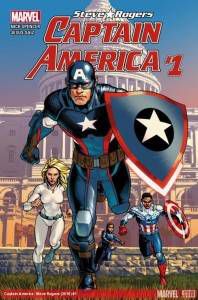 Yesterday, Marvel released the first issue of Captain America: Steve Rogers by Nick Spencer, Jesus Saiz, and Joe Caramagna. It’s a pretty boilerplate (albeit beautifully depicted) story of a rejuvenated Steve Rogers back in the field…right up until he tosses an ally to his death and declares “Hail Hydra” in a final page splash. The whole thing is intercut with flashbacks to his childhood of a neighbor inviting Steve’s mother to a Hydra meeting, thus implying that Steve was indoctrinated as a child and has been a sleeper agent of Hydra all along.

This is comics, right? Unleash a shocking twist to get readers to pick up the next issue! Make everything All-New All-Different for a few months until things settle back into the status quo! Have a character behave so incongruously that fans just have to know why!

Quick comics history lesson: Captain America was created in 1941 by Joe Simon and Jack Kirby as a superpowered, super-patriotic soldier fighting the Axis forces. He was famously depicted punching out Adolf Hitler on the cover of his first appearance, in Captain America Comics #1—which hit stands in December 1940, a full year before Pearl Harbor and before the United States joined World War II, making that cover a bold political statement.

You probably already knew that, but I’d invite you to think about it for a minute. In early 1941, a significant percentage of the American population was still staunchly isolationist. Yet more Americans were pro-Axis. The Nazi Party was not the unquestionably evil cartoon villains we’re familiar with today; coming out in strong opposition to them was not a given. It was a risky choice.

And Simon and Kirby—born Hymie Simon and Jacob Kurtzberg—were not making it lightly. Like most of the biggest names in the Golden Age of comics, they were Jewish. They had family and friends back in Europe who were losing their homes, their freedom, and eventually their lives to the Holocaust. The creation of Captain America was deeply personal and deeply political.

Ever since, Steve Rogers has stood in opposition to tyranny, prejudice, and genocide. While other characters have their backstories rolled up behind them as the decades march on to keep them young and relevant, Cap is never removed from his original context. He can’t be. To do so would empty the character of all meaning.

But yesterday, that’s what Marvel did.

Look, this isn’t my first rodeo. I know how comics work. He’s a Skrull, or a triple agent, or these are implanted memories, or it’s a time travel switcheroo, or, or, or. There’s a thousand ways Marvel can undo this reveal—and they will, of course, because they’re not about to just throw away a multi-billion dollar piece of IP. Steve Rogers is not going to stay Hydra any more than Superman stayed dead.

But Nazis (yes, yes, I know 616 Hydra doesn’t have the same 1:1 relationship with Nazism that MCU Hydra does) are not a wacky pretend bad guy, something I think geek media and pop culture too often forgets. They were a very real threat that existed in living memory. They are the reason I can’t go back to the villages my great-grandparents are from, because those communities were murdered. They are the reason I find my family name on Holocaust memorials. They are the perpetrators of unspeakable, uncountable, very real atrocities.

It’s easy, especially if you’re not Jewish, to think that anti-semitism is a thing of the past. It’s not. It flies under the radar, mostly, until suddenly it doesn’t: with graffiti in Spain, hateful party games in American high schools, vicious threats being flung at Jewish journalists for criticizing Trump. With physical attacks—with deaths—in France. Nor is neo-Nazi rhetoric, which hews closer to 616 Hydra’s shtick, a goofy make-believe thing. Not when the Republican presidential nominee spouts fascist ideology that echoes Hitler’s rise to power and spurs a literal rise in hate crimes against Muslims.

But writer Nick Spencer and editor Tom Brevoort are more concerned with making this “something new and unexpected”; with having “fun” and getting readers “invested in Hydra characters.” Because what’s more fun than downplaying genocide?

I’m not going to pretend to be cool here. I’m emotional. This is emotional. Captain America isn’t even my usual guy to get incandescently angry over the erasure of his coded Jewish history— that’s Kal-El, the Moses of Krypton—but reading this comic made me feel sick to my stomach. Reading the flippant responses of many non-Jewish readers—including friends—has brought me to tears. Somehow a community that gets up in arms about whether or not Batman has a yellow circle behind his logo seems to think that being angry about this is stupid, or indicative of a lack of experience with comics.

So let me be very clear: I don’t care if this gets undone next year, next month, next week. I know it’s clickbait disguised as storytelling. I am not angry because omg how dare you ruin Steve Rogers forever.

I am angry because how dare you use eleven million deaths as clickbait.

I am angry because Steve Rogers’s Jewish creators literally fought in a war against the organization Marvel has made him a part of to grab headlines.

I am angry because the very real pain of the Jewish community has been dismissed since this news leaked on Tuesday night as “Twitter outrage.”

If this story doesn’t hurt you? Good. I’m genuinely glad. I don’t want anyone else to have the gorge rise in their throat when they read the entertainment news. I love comics. I don’t want them to make people feel angry and betrayed. But understand that not feeling that way comes from a place of privilege, and don’t dismiss the concerns of those of us who are upset just because you have the luxury not to be.

I’ve been trying to think of how to finish this post, but I don’t think I can say it better than my friend and fellow Panelteer Sigrid Ellis did here:

How little must we matter. The people who created Captain America, and Superman, and countless other heroes like them. The people who need him. The people whose history and suffering and hope, as we stood on the brink of annihilation, gave you your weekly entertainment and your fun thought experiment, 75 years later.

I hope it was worth it, Marvel.