Tupac had Biggie. Laertes had Hamlet. The Yankees have the Red Sox.  When it comes to Harry Potter audiobooks, the most epic rivalry is Stephen Fry vs. Jim Dale.

Today, Peter Damien and Rachel Smalter Hall weigh in to declare an ultimate winner in the Book Riot Battle of the Harry Potter audiobooks narrators. Two will enter Book Riot Stadium. Only one will leave a champion. 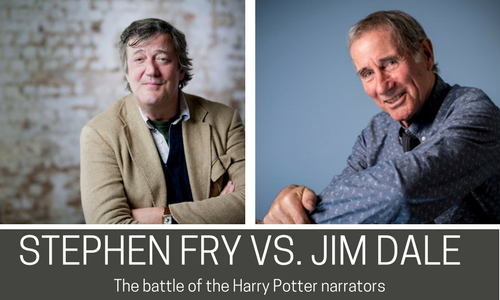 Who Narrates The Harry Potter Audiobooks?

Rachel: Hey Peter! I’ve been such a good little Hermione, finishing all my Harry Potter homework. I re-listened to both Jim Dale and Stephen Fry read Harry Potter and the Prisoner of Azkaban, and I have FEELINGS! I went in with a bias for Jim Dale — like a lot of Americans would, I bet, just because that’s what we grew up with — but Stephen Fry is the dark horse creeping up from behind. It’s going to be hard to choose a winner.

Peter: Hello! And I’ve also been a good… well… Dobby. Let’s be honest. I’ve been listening to the Harry Potter audiobooks, listening to comparison videos on YouTube between Jim Dale and Stephen Fry, and most crucially for me, I’ve been reading The Prisoner of Azkaban to my kids at night, and that’s influenced whose reading I prefer.

I think you’re right about the Jim Dale American bias. I wonder if a lot of Americans even know that Stephen Fry did a whole set of Harry Potter audiobooks? I’d bet not. I didn’t until I saw a photo of Stephen Fry and J.K. Rowling together and looked it up. But can we declare one better than the other?

I think we can. And I think it’s… Stephen Fry. I am prepared to go to the mat over this one. Which horse are you putting your money on? (Or are you going for both? And how much longer can I sustain horse-racing metaphors, about which I know zilch?)

Rachel: I think I gotta stay with my boy Jim Dale, and I’m loving how in-it-to-win-it you are for Stephen Fry. Lay it on me.

Peter: I’m willing to call Stephen Fry’s readings superior for various reasons. For one thing, I think he has a gravitas about his reading. Partially, it’s because he has a deeper voice and a sense of how to slow down and lend an ominous quality to certain passages. This is also invaluable as the books themselves get longer and deeper and darker.

Rachel: I am with you on that, and the comparison that kept running through my head was Christopher Nolan’s Batman versus Tim Burton’s Batman. Right?? Dale is more of a character actor / “voice artist,” with more over-the-top exaggeration. His Hermione is more shrill, Draco more cartoonishly evil, Trelawney more spooky and ditzy, McGonagle more stern, Hagrid more bumbling, etc. etc. But Fry is more nuanced, realistic, and familiar. He could be a grandpa reading you to sleep (or a Peter!), and I think he packs more empathy. Fry totally nails the scenes between Harry and Sirius in Azkaban.

But ultimately, I think Dale takes more risks with higher payoff. Fry has the human moments down, but Dale wins the magical and comical moments, which are what I love most about Harry Potter. (Then again, I’m a Tim Burton girl.)

Peter: I think you’re completely right, which is what great debates are built out of, innit, two people definitely agreeing on things. I think Jim Dale does a great cartoonish, larger-than-life, magical world. There’s a powerful sensawunda in Jim Dale’s reading, which is particularly perfect for the first two books. Just like Chris Columbus was an amazing director for the first two films, because he brought this bright, magical world to life. But imagine if Chris Columbus had had to go on and direct, say, The Half-Blood Prince, where things are very dark and very complex and no longer tiny wizards solving magical mysteries. I think it would’ve collapsed.

Aside: I think Stephen Fry and his particular world of film was somewhere in the mix when J.K. Rowling was writing the books. Harry Potter’s dialog owes a lot to something like Blackadder, which puts it firmly into Stephen Fry’s court.

Rachel: Oooh, good catch with Blackadder. Also, bonus points for “sensawunda,” natch! Do you think Rowling would have been watching Blackadder during the same period she was writing? I haven’t actually seen the episodes, so you win that point by default.

Peter: I dunno if she would’ve watched Blackadder while writing the book, but it was such a gigantic part of the television landscape — like Fawlty Towers, like Monty Python — that I seriously doubt she was unaware of it. It had to have crept in there somewhere.

I think Stephen Fry inhabits the secondary characters the best, too. The really minor ones, like Stan and Ernie on the Knight Bus, are, to my mind, both hilarious and very much their own people, when Stephen does it.

Rachel: That is so fascinating, because I completely 100% disagree. (What’s stronger than 100% — can I 127% disagree?) I credit Jim Dale’s secondary characters for finally converting me to the world of Harry Potter. The scenes at Hogwarts with the ghosts, professors, and portrait people always slay me in Dale’s version, while I think Fry’s subtlety can work against him.

I will concede that Dale sometimes misses the mark with major characters in key scenes: like when Hermione and Harry are trying to figure out how to work the time-turner in Azkaban, Dale’s exaggeration is kind of painful. His Hermione is a little too bossy and his Harry is a little too stupid. Whereas Fry handles the same scene with beautiful tenderness and humanity. But again, we’re back to the Christopher Nolan / Tim Burton thing.

Basically, I just want to give Jim Dale a big hug every time something really spooky or mysterious happens (Patronus!), and I think that’s why I’ve got to stand by him. His voice does this magical sparkly shivery thing.

Peter: This is something I can’t argue with… and actually, this undermines my own argument a bit. I was on YouTube the other day, listening to a comparison between Stephen Fry and Jim Dale, reading the final chapter of The Deathly Hallows, the final confrontation between Voldemort and Harry. Indicating exactly why I prefer Fry to Dale, in Jim Dale’s reading, Voldemort is this weird hissy villain voice that sounds like Snidely Whiplash more than a real character. It still feels like it’s being read as a children’s novel, when it had already gone way past that.

But… Jim Dale brought this vulnerability to Harry, this pain, which I had never ever thought about in that final scene. Stephen Fry bought a tension and a gravitas to this final showdown, but it wasn’t ’til I heard Jim Dale reading it that I realized — after so many many years of loving Potter — that really, Harry is young, and he’s hurt, and he’s alone inside, despite having remarkable friends. The final scene is him putting-paid to Voldemort for a scar on a forehead, and a much, much worse scar deep inside… and I never quite noticed all of that until Jim Dale was reading it.

That said, I still think Fry’s got the throw-away characters (like Stan and Ernie on the Knight Bus). The people we’re gonna see a bit, then never again. Also, I will go to the mat for Stephen Fry’s Hagrid. Not least because it translated almost exactly to Hagrid’s voice in the films.

Rachel: First, goosebumps from your young, hurt Harry epiphany. Second, my favorites of all the trolly YouTube comments are totally the ones about Voldemort’s voice. People have OPINIONS! And, yeah, I think Jim Dale loses in the Voldemort department.

Peter, I think what we’re really saying is: both Stephen Fry AND Jim Dale are amazing, and we’re too wishy-washy to make up our minds. Our readers are going to be so disappointed! Harry Potter is so massively successful precisely because it brings together the best of both magic and humanity — Jim Dale and Stephen Fry just represent two sides of the whole, Dale dominating the magical moments and Fry making us FEEL ALL THE FEELINGS.

Can’t we just make a supercut of the parts we like best? And edit out all of Jim Dale’s weird hissy Voldemort voices?

Peter: Wouldn’t a supercut be fascinating? This is completely off our topic, but wouldn’t it be cool to get a Harry Potter audiobooks full-cast recording? I’ve only recently become a fan of those. If Harry Potter were in the public-domain, we could put this together right now.

Rachel: Yes! A brand new full-cast recording of Ender’s Game just came out on audiobook, by the way, and I’ve been itching to listen to it.

Peter: Anyway, yeah, okay, fine we can conclude that Harry Potter audiobooks are awesome in any form you can get it in (and let’s be honest. If someone handed me audiobooks, I wouldn’t hesitate whether they were Jim Dale or Stephen Fry).

But! BUT!… Stephen Fry wins because he is TALLER.

There you have it, readers: we declare Stephen Fry winner of the Battle of the Harry Potter audiobooks narrators, because he is taller and Peter says so. Jim Dale is first runner up because all the other reasons. …And second runner up is PETER for using all the voices when he reads it to his kids.

Who do you think should win? And, if you want more Harry all the time, check out our full Harry Potter archives made for muggles and wizards alike.