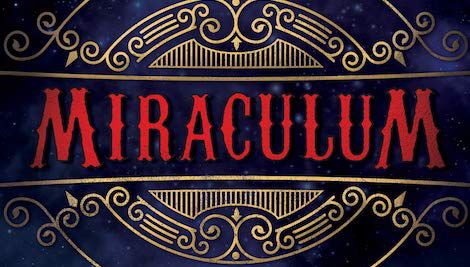 In the world of indie crime novels, you won’t find many writers with more momentum than Steph Post. After a gritty debut with A Tree Born Crooked (out of Pandamoon Publishing), Post moved over to Polis Books and came out with the first two books in a blistering Florida crime series, Lightwood and Walk in the Fire. Now, with her fourth book, Steph is transporting readers to the magical realism of a 1920s carnival. Miraculum hits stores on January 22nd. 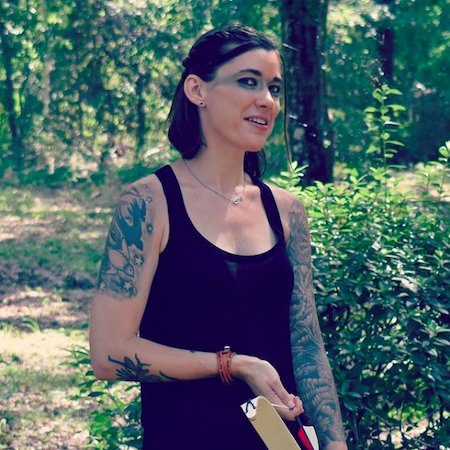 Matt Coleman: Let’s start with a little general info about Miraculum. Can you give us your elevator pitch? What’s it about? Why should readers be excited about it?

Steph Post: I have a fear of elevators, by the way. I have so many nightmares about them. But anyway, the down-low on Miraculum: it follows Ruby—a tattooed snake charmer— and Daniel—a mysterious stranger posing as a geek— and the havoc caused by their meeting in a carnival traveling across the South in the 1920s. On the one hand, it’s a gritty story of a hardened woman trying to make her way and hold her own. But on the other, it’s a magical story filled with myths, voodoo, art and lots and lots of secrets. 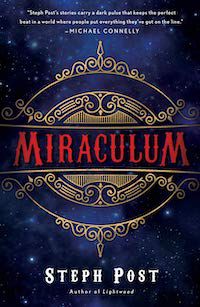 I think readers should be excited because it’s the sort of story you can get swept away in. The Starlight Miraculum—the carnival where much of the book takes place—is a microcosm that the reader steps into on the very first page. I think reading Miraculum will be an immersive experience. It also breaks a lot of rules on a lot of different levels. I’m hoping readers will see the sparks flying behind those decisions.

Matt Coleman: This is a bit of a departure for you. Your first three books are very visceral and current. They all feel ripped from an extremely current landscape of crime. And now you’ve transported yourself and your readers back a hundred years. Can you talk a little about the decision to set a book in the 1920s?

Steph Post: One thing that I’m sure won’t be evident to readers is that Miraculum was written in-between my two most recently published Florida crime novels. I finished Miraculum before Lightwood was even accepted for publication and I had no idea that I was going to follow it up with Walk in the Fire, bouncing back and forth between the two genres of Southern crime and Southern historical fantasy. Both genres represent a side to me and my writing, but Miraculum isn’t really as much of a departure for me as people might initially think.

As for the 1920s—I mean, who isn’t fascinated by that time period? Although much of the setting for Miraculum is in this insular world of the carnival that isn’t too effected by the outside world, I wanted to set the story in the 1920s because it was such a period of rapid change. Daniel is obsessed with newness. And I wanted to put him in a time period where we’d see him at his top form, being intrigued by automobiles and radios, new fashions and quickly-evolving gender norms. The book I’m currently working on is set in the 1890s for many of the same reasons. I love writing in time periods where there was an energy, a buzz in the air that the characters can pick up on.

Matt Coleman: You have also … dare I say it? You left Florida, Steph. You left Florida. Miraculum is set on the Texas-Louisiana border, so, to be fair, you didn’t go far. But as a writer who was quickly becoming the indie crime voice of a state, tell us about the choice to venture out.

Steph Post: I know…. I actually contemplated having the carnival go all the way down into Florida—which would be historically accurate, as Sarasota and other areas in central and south Florida were the common wintering grounds of carnivals and circuses—but the story broke away before that could happen. Also, at the time of writing Miraculum, I still wasn’t identifying myself too much with being a “Florida writer” in the way I’ve become. I was just concerned with telling a good story (which I still am).

But the South is so much a part of who I am and how I write, so I couldn’t go too far from Florida. In Miraculum, the carnival cuts a low swath across the Southern states and partly this is to stay true to my roots and partly because I wanted to capitalize on some of the dark mysteries lurking among this landscape. I also really wanted to get into the Louisiana bayou because the swampland setting is so familiar to me. I grew up in a backwoods Florida swamp and wanted to bring the sights, sounds and smells—and creatures—of that unique setting into this story that certainly has its flashy, dazzling moments as well. A lot of Miraculum is about dualities playing off of one another and the various settings in the South are a part of that rivalry.

Matt Coleman: We go back a little ways, so I know we share a love of the show Justified. And I’ve told you before that I pick up on some similar notes in your earlier work. Which is one of the reasons I love those books. With Miraculum, I’m reminded of another show I absolutely loved called Carnivàle. I know there are plenty of fans like me out there who have longed to return to that world. The early century carnival. And the magical realism of some dusty carnival morality. So will fans of the gone-too-soon show be as pleased as I think they will?

Steph Post: If I hadn’t encountered Carnivàle ten years ago, there would be no Miraculum. Period. As much as I love Justified, Carnivàle was my first love. I could geek out about this show for days. It was actually the first cable television series I’d ever watched and so both the story and the format of its delivery transfixed me. I watched those two seasons over and over on DVD until even today. And I could still quote you passages from Brother Justin. 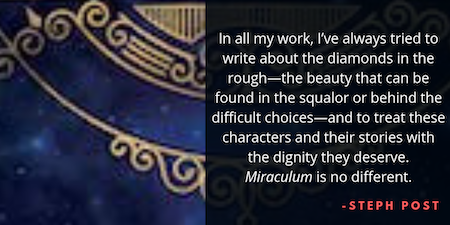 I really do believe that fans of Carnivàle will find a kinship with Miraculum. One of the reasons I loved the show so much was because it combined these supernatural elements with the hard, gritty realities of the traveling carnival lifestyle. The dust and the glamour exist side-by-side and I absolutely tried to capture that dichotomy in Miraculum. In all my work, I’ve always tried to write about the diamonds in the rough—the beauty that can be found in the squalor or behind the difficult choices. And to treat these characters and their stories with the dignity they deserve. Miraculum is no different.

Matt Coleman: Regardless of setting, time, or place, one thing readers can count on in a Steph Post book is clever symbolism. I’ve noticed a fascination with fire that you have, which carries over through books. And, between the snake charmer and the chicken-biters, you’ve got some animal symbolism popping up as well. What drives some of those choices for you?

Steph Post: I like to have a sort of language—a different way of experiencing the story—simmering right underneath the surface of the novel that maybe readers will pick up on and maybe they won’t, but I hope that the effects at least can be felt when reading. Most of this comes through symbolism and also through connecting the symbols in the story and across books, even. It’s no coincidence that foxes, snakes and birds appear in all of my novels. Sure, these are my favorite animals, but they’re also standing in for specific meanings.

I’ve spent a lot of time studying archetypes and classical archetypes are often in my work, but I also include a lot of personal symbols and meanings. Here’s an example that I think doesn’t give too much away: Daniel’s last name is Revont. This comes from the Finnish word “Revontulet” which is the Northern Lights. The term also means “fox fires” and connects the Aurora Borealis to the arctic fox in Finnish folklore. The fox is traditionally viewed as a trickster. So, from the first time we hear Daniel’s last name, he is essentially telling us what he truly is and where he is originally from. This also takes on particular significance when the fox appears later in the story.

Matt Coleman: You’ve carved out quite a niche for yourself as a personality within the indie lit world as sort of a prototypical badass modern woman. It’s a persona that sort of busts the natural stereotype. So it makes me wonder about your thoughts on avoiding stereotypical female characters in your writing. How do you avoid stereotypes in general? And, more to the point, with female characters? 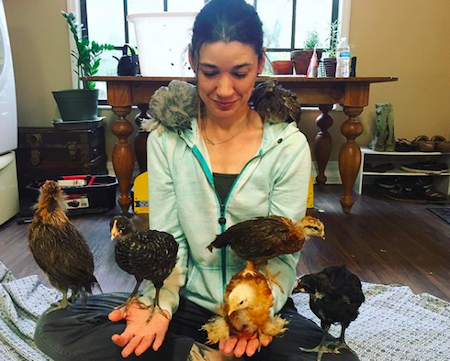 Steph Post: Well, thank you. But honestly, the secret is to just write authentic, complex characters. If you put in the time and effort to do that, then you don’t have to worry about stereotypes. I think stereotypes come from shorting yourself on the character development side of things and so then just glossing things over. It’s a glaring sign of laziness. I mean, sure, archetypes and tropes have their place as a foundation. But you’ve got to work to flesh the character out.

As far as female characters specifically….. Unfortunately, it’s laziness plus the lack of giving a shit. That’s it.

Matt Coleman: Before you go, what’s next? Are we getting a Judah Cannon Book 3 anytime soon? Do you have plans to return to the world you’ve created with Miraculum? Or is there something on the horizon we don’t even know about? 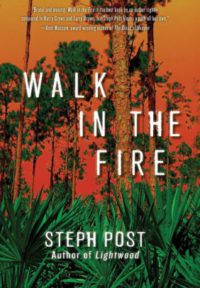 Steph Post: I actually finished up the third and final book in the Judah Cannon series this past October! Yes, the story has found its end and will hit shelves in 2020. Right now, I’m just starting the book set in the 1890s I mentioned earlier. It’s much more aligned with Miraculum’s style than any of my crime novels and I think I’ll be headed off in that direction for a while. As for revisiting Miraculum…. There are no plans to, but Daniel and Ruby might pop up again sometime. They’re the kinds of characters who sink their claws into you and don’t want to let go. Only time will tell.