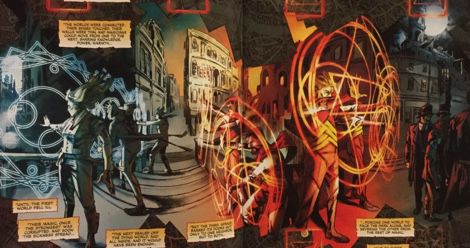 V.E. Schwab’s beloved Shades of Magic trilogy (A Darker Shade of Magic, A Gathering of Shadows, and A Conjuring of Light) came to an end in February of 2017. As we readers know, however, the end of a series doesn’t always mean the end of the story. Fortunately, Titan Comics wasn’t ready to let go either, and worked with Schwab to create a comic that fleshes out a story only hinted at in the Shades of Magic books: that of Rhy and Kell’s father, Maxim Maresh, when he bore the sobriquet “The Steel Prince.” 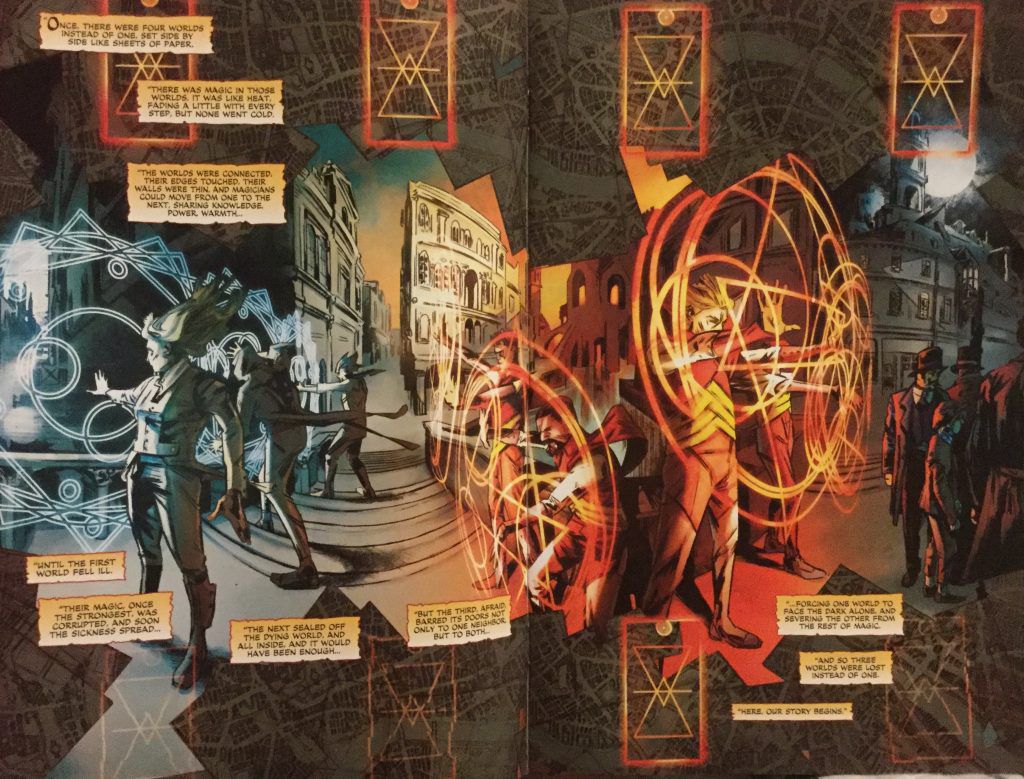 I had the opportunity to spend a few minutes at San Diego Comic Con speaking with Schwab about the absolutely gorgeous Shades of Magic: The Steel Prince series. 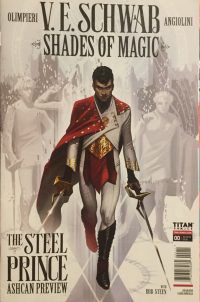 Book Riot: I saw you mention on Twitter that Vicious was inspired by Cowboy Bebop. Were there any anime or other properties that inspired Shades of Magic or contributed to the style of the comic?

V.E. Schwab: Yes! Less in the style but in the content, Shades of Magic, I always say, is a love letter to both Harry Potter and Avatar: The Last Airbender and honestly, as I’ve moved forward, probably some Full Metal Alchemist: Brotherhood as well. As I was writing Shades of Magic, I was watching Brotherhood from beginning to end for the first time—I’d seen pieces of Full Metal Alchemist but I’d never seen Brotherhood—and I probably watched that entire show in a week and a half (I have zero self-control when it comes to Netflix). I’m a huge anime fan and it continues to be a visual and stylistic, really informative, element to my writing. I always try to visualize what I’m writing as a movie but it’s never a live action movie, it’s always an anime.

BR: The Shades of Magic novels are such visual books; the colors are so vivid. Did that make it easier or harder to translate to a comic?

VS: I think it provided a challenge in that I had such a codified vision, in my own mind, of what it looked like…I didn’t want to skew very far because I had made very visual novels and as we were going through the process of selecting who we were going to have do the art, it was something I had in my mind very clearly. We had the line art for all of the artists and I got to see what it looked like colored, so I saw the colorists’ work as well. Immediately when I saw (Andrea) Olimpieri’s work from Dishonored, I knew that (he could create) the scale, the dynamism…I knew there were going to be a huge number of fight scenes and they would have a magic element to them, which adds a very complicated aspect…Between that and Enrica (Angiolini, the colorist)’s work bringing the different styles of magic to life—Maxim’s magic is very warm, reds and yellows, whereas Isra, a wind magician has a very blue, cool palette—it gives me a freedom to really to codify things. I’ve been so fortunate in that my entire creative team has been on page with me. We’ve never had a clashing of sensibilities. We were very, very careful to select the exact right people for each job and it helps that my editor, Amoona, is just brilliant.

BR: No one wanted to go Ditko on it? 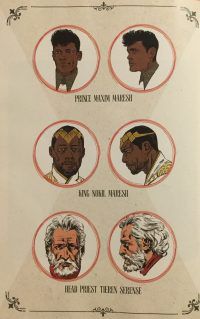 VS: No! Titan is also one of my book publishers…everyone knew the aesthetic. I’ve been very fortunate. I think fan art is one of those cool things…when you see many different artists representing a story or the characters in the same way, I think that means you’ve done well describing it. Everyone was on the same page from having read the books and no said, “Oh, I didn’t see it that way at all, I saw it this way…” Everyone was already operating in the same, very specific four colors and that made it easy.

BR: I heard you mention you had always intended to tell Maxim’s story along with a couple others. Did you always intend to do so in comics or was there a debate about format?

VS: I had no idea. I knew I wanted to tell it and I’m always a fan of diversifying my style of telling. Because Threads of Power (a forthcoming sequel set in the Shades universe) already has its slot really locked down…it’s hard to move in two directions simultaneously, and I didn’t want to be working on a novel sequel and a novel prequel at the same time; it can be distracting. I thought the novel sequel was the strongest way to go and that opened up some avenues: were we going to do novellas or short stories or something else? Titan had been in conversation with me for a while about whether I’d ever want to write comic. I feel pretty strongly, one or two properties aside, that I have very little interest in writing in other people’s domains. The communal ownership thing is scary and also, it seems like there’s a lot of anger. But I did want to write in my own domain. When Shades of Magic got popular enough, Titan said, “We would love it if you would try that,” and I said, “I can do that and it would be mine?” That was something so exciting to me—I’d always wanted to do something in the Shades of Magic world visually—and when I got to that section of Conjuring of Light and I was writing it, I thought, “Oh! This would be perfect!” Because it’s additive and it can exist on its own way as well.

BR: Do you have a different process when you’re writing comics?

VS: Yes, it’s totally different! It’s not like going from short stories to novels, it’s a completely different art form…there was a learning curve. It took me six to eight months to really get the hang of it. I’m lucky I had an editor who was there to walk me through it. I said, “Look, I’ve spent ten years becoming a novelist…I’m not going to come to this and pretend I understand everything about how to write comics.” It’s still a learning curve. I’m just finishing up issue two right now and I’m still learning not to switch scenes at the bottom of the page more than once or twice per book…to know when to end, when to let it be a double page spread, and when to vary the pace and cadence…it’s been exciting! And we make changes all the way up until it goes to print…I just saw the final art for issue one and there’s one little speech bubble that I thought, “You know, now that I see it on the page, I don’t want this word…”

VS: Isra goes on to be one of the royal guards in Conjuring of Light but before that she will be the soldier Maxim finds as his companion. Isra is gay. Isra has zero interest in men whatsoever, which is made very clear very early on and I’m very excited, as a gay woman, to have that character. Rhy and Alucard were intended that way from the beginning. They were my OTP and they were never going to die because I think there’s enough killing queers in books. Also, I wanted that to be the love story. We go in expecting to find love stories between Kell and Lila or between any characters except Rhy and Alucard, and I just wanted their romance to be something people could have. “They’re going to get a happy ending!” They’re going to get a happy ending in that it’s relative, I mean, everyone is going to suffer but I really do believe in happy endings, I just believe we have to work for them. They’re probably my most important pairing in the book.

BR: I think it’s so important. I went to a panel at Emerald City Comic Con last March that talked about joy in queer literature and they talked about some books being intended to make a point and in some books, it’s just part of who the character is. 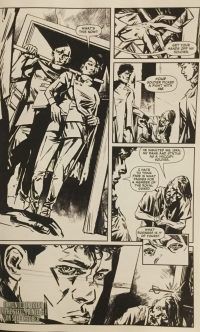 VS: Especially with my adult books, I don’t want queerness to be a plot point. The thing about the Shades of Magic world, probably my proudest thing, is creating a world that’s not binary. Even the characters who end up in seemingly heteronormative pairings, like Kell and Lila, either one of them could just have easily ended up with someone of the same sex and that’s important to me. It’s not about who you fall in love with, it’s about how much power you have. While you have relics like Alucard’s family, who still have some specific notions, the vast majority of people are, like Lila, attracted to power. Lila could easily have run off with that other ship captain if she hadn’t been a murderer. It’s definitely something I want to explore in the comics. I get a lot of messages and a lot of letters and emails from readers, both teens and adults, thanking me for Lila, who can read as genderqueer…Lila is a historical character so she doesn’t have that language but if Lila was a 2018 character there’s no question she would be genderqueer. Victor is canonically ace in Vengeful, which is something I’m really excited about as well.

Victoria is a scholar, a gentle person, and a fantastic writer. She has a back catalog I highly recommend getting lost in while you wait for her middle grade novel, City of Ghosts to drop on August 28, the long awaited (at least by me) sequel to Vicious, entitled Vengeful, on September 25, and Shades of Magic: The Steel Prince, to arrive in October.

Why are you still here? Go! Read!