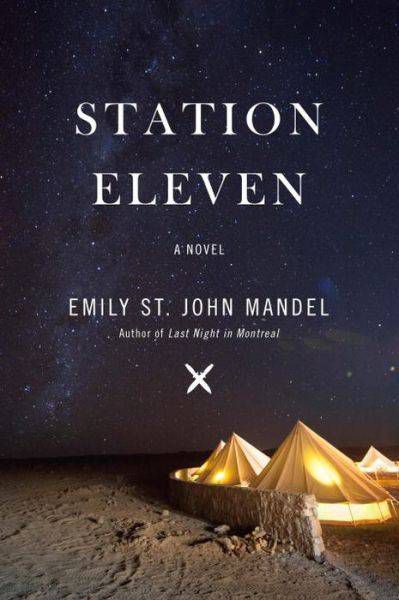 I literally finished Station Eleven by Emily St. John Mandel about four minutes ago and started typing this. It’s rare to come across a novel that urges you toward consumption, devouring page after page in the span of twenty four hours, let alone one that lights a fire within you, whose blaze only grows with each chapter’s passage. And yet, here we are, and my bones are burning trying to contain the passion I feel for this novel.

By this point, you’ll have heard about this book. What will you know about it? Shakespeare. The end of the world as we know it. A mysterious comic book. Something something melancholy.

To quote MTV Diary, “You think you know, but you have no idea.”

Station Eleven is about all of this and more, threading through these themes and a myriad of well-drawn characters with a light touch. Mandel is a master and watching her work, pulling together narratives, scattering timelines like seeds and guiding where they sprang up alone or grew together or were pruned apart was one part of the joy of reading this novel.

This is a masterful book, from start to finish. Mandel zooms in and out of the narrative, a camera swooping down close to fixate on intense characterization and dialogue, and then breaking, soaring, taking in the world from overhead, these pinpricks of lights that denote civilization and order and a façade of calm, and how all of those lights look as they die, one by one. Her prose is direct, with a pointed beauty, and you can tell Mandel knows exactly what she’s doing at all times. No sentence is wasted, and every mark on the page pushes us forward through the world. Don’t even get me started on the structural and emotional resonance of the actual Station Eleven comic in the novel, which was so good it made my little nerdy heart jump into my throat and have a dance party.

The thing that has me absolutely astonished, gutted, wrung-out, and giddy, the thing that will make me shake my friends by their lapels, is that at its core, Station Eleven is a science fiction novel doing what science fiction does best. Already awarded the Arthur C. Clarke Award, many are aware and celebrating Station Eleven’s home in SF, but I want to break down what makes it such a successful sci-fi novel.

Science fiction works best when it interrogates our past and inspires our future. And Station Eleven, at every turn, does both of these with a fluid grace and a subtle touch. Mandel actively questions the pre-plague world, using older characters experiences with the world we know today and younger characters lack thereof, to illustrate just how incredulous the world we live in—lived in—really is.

The children born into the world post-plague simply can’t fathom giant metallic vehicles lifting off the ground and shuttling people across the world. They can’t imagine an invisible network of signals and noise, a whole web of information sitting in the air, there for anyone to access. Even some of those who were alive during the plague are having a hard time recognizing the world they used to live in, where the flick of a switch brought light and heat, and was absolutely taken for granted. The world of Station Eleven is quiet; no planes, trains, or automobiles to drown out the rest of the Earth. And in that quiet, those who are left have nothing to do but contemplate the world they lost.

And yes, that may be a bittersweet thought. Yet, throughout the novel, Mandel makes sure to make one thing clear: all is not lost. It may be twenty years since the plague and yes, there will be many, many years left to go, but there is a chance to build a new world, a better world; to take what was good, and leave the bad behind. And while Mandel makes sure to show that not all that is bad can be ignored, there is a whisper of hope lighting on each of her pages. Progress is being made, and it’s only a matter of time until they become even faster.

On that note, simply for readers, that note of hope, progress, and inspiration should carry to all of us. Unlike the people of Station Eleven, we don’t live in a world where 99% of the population has been killed. Granted, things are not as utopia-ish as we’d hoped, but still. Our future is bright, and if anything, the thinkers and tinkers and writers and artists of tomorrow should feel inspired knowing that we still have our modern world, and that the future is ours to shape.

If there’s any message to Station Eleven, it’s to recognize the history we carry with us: the ghosts, the regrets, the pain, and the joy, and use them to bring about a better world. I was absolutely floored by this novel and it has not only left me appreciating the modernity I take for granted, but has instilled in me a new sense of hope for tomorrow. Now that’s good science fiction in my book.