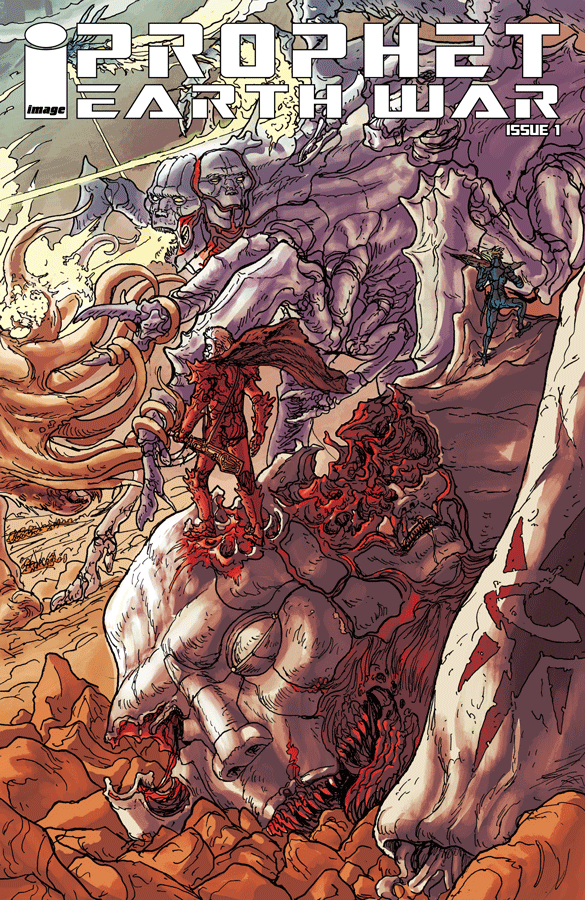 This Wednesday Prophet: Earth War #1 will finally hit stands, originally solicited more than a year ago. But here it is, in the flesh at last. So what’s the deal?

Anyone who follows my internet presence or my store’s sales trends knows I’m a huge Brandon Graham fan. His other two main current projects, the Island anthology magazine and 8house shared fantasy universe, are two of the most important comics being published right now. Both series have their roots in Prophet, which doesn’t garner much buzz but is perhaps my favorite science fiction comic ever made–a meditation on post-humanism that reevaluates our modern concept of the human body, inspired by 1970s European sci-fi in the vein of Mœbius and Heavy Metal magazine in its heyday.

Brandon Graham’s Prophet began in 2012 as a reboot of a forgettable Rob Liefeld series from Image Comics’ early era in the 1990s–the titular John Prophet was essentially an edgy Captain America rip-off with his patriotism replaced by religious fervor. Graham stripped away nearly everything aside from the man-out-of-time supersoldier concept, and created something entirely new.

Rare in our age of oversaturated renumberings, Graham’s Prophet began at issue #21, right where Liefeld’s series left off in the ’90s. But don’t let that fool you into thinking you should go back and read the Liefeld run (it does include a “Babewatch Special,” though, where John Prophet is reincarnated as Joan of Arc with predictably Liefeld proportions and a super buff horse).

All you really need is the four trade paperbacks of Brandon Graham’s Prophet run, which collect issues #21-45 and the two “Strikefile” visual guides. Most of the series is written by Graham, but it’s a collaborative project with each protagonist’s story drawn by a different artist: Simon Roy (Jan’s Atomic Heart), Farel Dalrymple (The Wrenchies), Giannis Milonogiannis (Old City Blues), and Graham himself comprise the core art team, while many more artists join in later on as new characters are introduced. None of the artists feel like fill-ins–each artist draws to their own strengths, focusing on protagonists that lend themselves to each particular artist’s style and often collaborating with Graham on writing duties.

Working at a comic shop, Saga is a sci-fi series I can recommend to virtually anyone–Prophet is not. Two-thirds of the people I recommend it to love it, and the other third say it’s the worst book they’ve ever read; there’s a good chance Prophet isn’t for you, and that’s alright. It doesn’t explain anything, it’s a reboot of an awful comic from the ’90s, and it’s got a weird nonlinear story involving lots of clones and words you can’t pronounce.

The first volume, Remission, begins as a fairly straightforward Conan-in-space sort of tale with lots of casual cannibalism. The powerful Earth Empire has been vanquished, and our story begins millennia later as John Prophet emerges from cryosleep to activate a satellite that reawakens the Empire so they can reclaim their planet… and the galaxy. This first half of Remission is all drawn by Simon Roy, and feels not so different from any other above-average Image sci-fi series being published today. I did a close reading of the first few issues last year for The Comic Age.

Once Prophet activates the satellite halfway through the volume, though, the story flips on its head and suddenly becomes much more strange and metaphysical. For readers expecting Conan in space, this is where they begin to hate it–but if you know the book is going to be odd, this is where it really kicks into high gear. *MINOR SPOILERS AHEAD*

Turns out… activating the satellite activates thousands of other John Prophet clones across the universe, and the scope of Prophet expands exponentially. The bulk of the story jumps between our first Prophet (Newfather Prophet) rebuilding the Earth Empire, and a rogue Prophet (Old Man Prophet) who wants to stop it from happening.

And that’s as close as I’ll be able to get to a summary. As I said earlier, the central themes of Prophet are post-humanism and bodies–the supporting cast includes a robot who’s more human than any of the human characters, a talking tree, a living planet, and a human who gained cybernetic parts until he became fully robot and is now trying to become human again by stealing people’s body parts (as you do). Many characters have transcended their human bodies and exist now as abstract consciences.

While it begins as a predictably male-dominated comic, Prophet‘s twists on bodies also extends to a commentary on gender as it progresses. The Prophet clones are all raised to be “brothers,” including female and genderqueer Prophets, and alien characters are shown to have all sorts of non-binary gender dynamics. Much like Graham’s 8house: Arclight, these parts of the story are presented not as a gimmicky highlight, but as the norm of society in the story, so there is little attention drawn to it, and if you’re not reading closely you could easily miss a lot of the nifty gender stuff.

Even though Brandon Graham is the writer for most of Prophet, you can tell he’s an artist–while most high-profile comics writers will fill the page with speech bubbles to remind you that Hey, remember me, the writer?!, Graham’s narration and dialogue are beautifully sparse, leaving room for the art to breathe. The world inhabited by the characters is reminiscent of Dune, but in this post-human society, mechanical human creations are all derelict ruins and the spaceships of Prophet‘s future are instead fleshy, living organisms.

8house and Island are both spiritual successors to Prophet in their own way–8house as a collaborative collection of stories by different artists set in the same universe, and Island as a showcase of (primarily sci-fi) artists from around the world. While most people read Prophet in trade paperback, the single issues were notable for their backmatter: unrelated back-up comics by a wide range of different artists curated by Graham, the most direct predecessor to Island. Many of Graham’s Prophet collaborators have gone on to work with him on both of his current projects.

Prophet: Earth War will be the long-awaited finale of the series, and in Prophet tradition, issue #1 also features a creeeepy back-up comic by Sarah Horrocks (who’s in this week’s Island #6 as well!) that’ll be worth the price of admission alone. It’s been a long time coming, but in the words of Old Man Prophet: “This must not end here.”