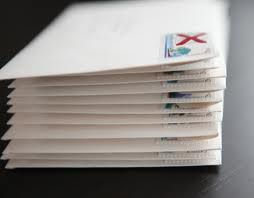 What’s the next arena for literary foment? Try your mailbox. This month, The Rumpus launches their first print subscription with Letters in the Mail. Sign up and you’ll receive three to four letters a month, each from a trenchant, hilarious, or otherwise fantasy-pen-pal author.

Each author writes one letter, which is then copied and sent to all of the subscribers. (After a finger-licking envelope-stuffing party – beer and sketching!) What lands in your mailbox may not be narrative; poems, drawings, or other surprises lie ahead. Some writers might even include their return address, in which case you can reply and try not to pull a Thomas De Quincey.

Elliott started the Letters project to rekindle the pleasures of paper correspondence. While nostalgia spurred this undertaking, the epistolary tone will be far from wistful or fusty. To Book Riot, he reveals a few more upcoming participants: cartoonists Paul Madonna and Dean Haspiel, poet Matthew Zapruder, and novelist / YA author Katie Crouch.