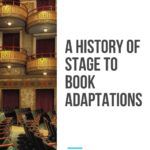 In my time as a teenager, stage manager, and now librarian I’ve seen various plays and musicals that dominated the minds and shelves of young adults. Often sharing fandom space with kids who were already passionate readers, these theatrical works have become known not just as performances, but have also had their cast recordings downloaded, seen their characters become fan fiction stars in their own right, and inspired novels and movies based on the original script. In the past year alone, I’ve ordered the novelizations of Dear Evan Hansen and The Prom for my own school library, as well as YA books about the characters featured in Hamilton, the score for Heathers: The Musical and an updated copy of Ned Vizzini’s Be More Chill, which had its off-Broadway premiere in 2018. Each of these books has not only been requested but has been hard to keep in stock, with a steady stream of students checking them out. It’s clear from my conversations with my students that they choose these books not just because the summary looks interesting or the cover is eye catching, but that when they pick the book up, they already have an emotional connection to the storyline based on their exposure to the theatrical version. This enjoyment of musicals, plays, and the reading materials that they’ve spanned is, I found in my research, not at all confined to my students but is instead a widespread trend with many fans.

The Rising Accessibility of Theater

I’m going to be honest: I spent many years of high school and college scampering around backstage areas as part of a stage crew, and yet I still tend to consider theater one of the least accessible forms of art. Besides the obvious cost of tickets, there’s the commitment of traveling to the location where it’s being performed, the culture baggage that can surround such places, and the fact that, outside of major cities, many places are limited in the number of shows they can offer per year. This isn’t to say that there aren’t many great smaller companies doing exceptional work and working to open their shows to everyone, simply that I think the idea of “going to the theater” has, for a long time, been seen as a very specific activity in which a limited number of people can engage.

As with many other forms of art and communication, the rise of the internet has been able to break down some of these barriers, both in how widely a production can be viewed and also in how much control fans have over their interactions with it. For example, in a pre–COVID-19 world, you could catch the musical Dear Evan Hansen on Broadway or in London, as well as on its National Tour. But fans, especially those in farther flung cities, can also choose to watch the film adaptation, view songs and scenes on YouTube, or stream the original cast recording.

My own small to medium–sized city just got in-person performances of Hamilton this year, but with the widespread popularity of the show, and the ability to read and watch in ways we didn’t have even ten years ago, it felt like the cultural phenomenon was building long before it arrived in my city. While there’s always been the ability to mail-order the script for a beloved play or sheet music to replicate a favorite musical number, potential audiences are now more likely to have access to digital versions of the story before they have the chance to see an in-person production, if they get one at all. What this means is that productions, especially ones like Hamilton that gain widespread notice, can reach fans at an early stage beyond the markets of well-known theater meccas like Broadway or London’s West End. At it seems only fitting that younger audiences, well versed in not only consuming online content but creating it as well, would be in a position to want access to these productions in multiple forms beyond the stage. Naturally, this means that plays that appeal to young people are ripe for adapting into a non-digital, not even spoken, form of art: the book.

Note: While there are many, many plays based on books, there are fewer books that started out as plays. Since the number of publications is limited, there is a lack of diversity in voices reflected in the books below. Personally, I would love to see this trend toward novelizing plays and musicals expand to shows like Hadestown, and if you’re looking for plays that read like novels, the works of August Wilson would be a great place to start. 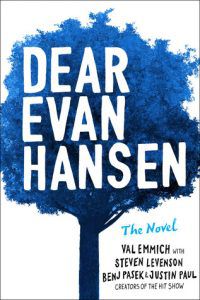 First premiering at the Arena Stage in Washington, D.C., before moving to Broadway and off-Broadway productions, the stage musical Dear Evan Hansen tells the story of Evan, a high schooler, and a lie that spirals out of his control. Without spoiling the plot, I’ll tell you that the musical touches on several themes that are common themes in young adult literature, including suicide, first love, and family changes, making this a natural fit for a YA novel adaptation.

In adapting the musical to a book, the creators worked with writer and actor Val Emmich to create a novel that both told the story of the original and included scenes and descriptions that had been originally proposed as part of the production, but had not made it to the final version of the show. In an interview with The New York Times, Emmich revealed that the show’s creators had allowed him to take risks in expanding on the material, but that ultimately the themes of the work remained the same. Levenson, one of the show’s creators, said that a main motivation behind the musical’s novelization was the fact that it had the potential to reach fans who could not afford to come see the show on Broadway. Using the soundtrack and his own viewing of the show as inspiration, Emmich worked to translate its emotional resonance to the page, both in the language he used and by fleshing out scenes that are alluded to but not played out in the original show. 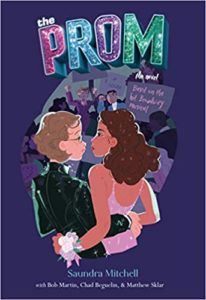 The Prom: a Novel Based on the Hit Broadway Musical by Saundra Mitchell with Bob Martin, Chad Beguelin, and Matthew Skylar

Saundra Mitchell’s adaptation of The Prom, a musical that premiered in Atlanta in 2016 before moving to Broadway, makes use of the structure of a musical, incorporating lyrics from the show directly into the text. In both the novel and the musical, Broadway stars Barry and Dee Dee are looking for a cause and some attention when they land upon an Indiana prom where 17-year-old Emma has been told she can’t bring another girl as her date. Touching on themes of sexuality and identity, the show also pokes fun at the motives of the Dee Dee and Barry as they show up with their own agendas that slowly fall away over the course of the story. Mitchell’s background as a screenwriter shows up in the book, which makes more use of staging than Dear Evan Hansen’s novelization. 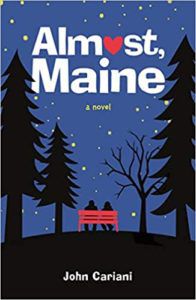 Like the play it’s based on, the novel version of Almost, Maine is composed of short stories whose vignettes weave together to make up the story of the people of Almost. Unlike most adaptations, in which the original play’s creators often hire a writer to flesh their script into a novel, this book is written by Cariani, who also wrote the play and debuted it in 2004. While Almost, Maine does not have to grapple with translating musical numbers to print the way other books do, Cariani still had to work to communicate the quaint scenery of the original production on the page.  Reminiscent of Let It Snow for its interconnected characters, Almost, Maine deals with the complexities of first love and heartbreak in a tiny town.

While there are many plays that have taken inspiration from written work, the rising access to theater, especially by younger, internet savvy fans, has combined with plays naturally suited to the YA market that have become popular with readers. Whether a reader has had the opportunity to see a performance in person, they can enjoy the material in a portable form with one of these books.