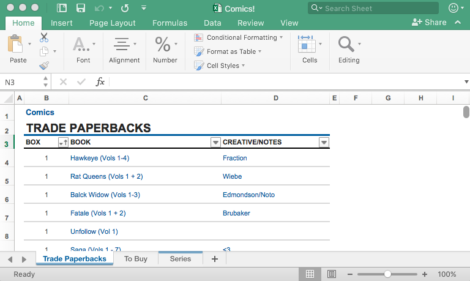 When I first started reading comics in issues, I just stacked them on the floor. But as the pile grew (and since shelf space was at a premium), I graduated to a longbox. I only had twenty issues or so at the time and I thought I’d never fill it. Then, of course, the long box got full.

To combat this expanding collection and a truly unwieldy stack of trades, I ordered a set of five shortboxes and purchased two simple crates from an office supply store. One shortbox was for completed series, as those could be stored away without having to constantly pull out the box to fill it with new issues. Three others were for packing up trades I had read, leaving one in reserve. The to-be-read trades were put into the crates, which are more easily accessible.

When I started packing trades into shortboxes, I realized I might want to read or reference one of those volumes again. But I would have no idea what was in which box. This is the part that did my Type A soul proud: I turned to spreadsheets. 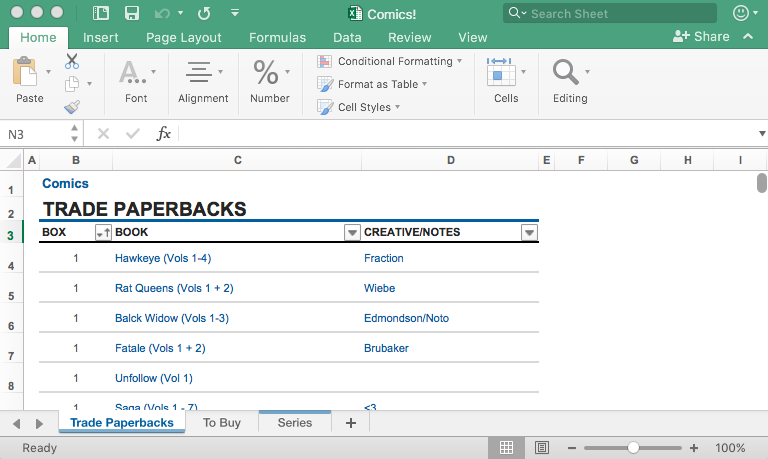 Sheets are a reader’s best friend!

I labeled the shortboxes 1, 2, and 3, and then cataloged which books were in which box. This list can be organized by title or box number, for easy reference. It also includes a column for notes to myself, like creator names or brief reviews. On the next sheet, I listed owned books that I hadn’t yet read, so I wouldn’t forget what I have to get to, even if books are tucked away.

As I rediscovered which volumes I had, I remembered things I wanted to buy on my next store run, so I also added a sheet for titles to purchase. This last sheet has already helped me focus on my shopping list when I hit the store. It also alleviates the worry of paying for the same trade twice. I’m also working on a list of the series I’m following in issues, just for my own quick reference (especially when someone asks for recommendations!).

The most important takeaway here is that you want to get started as early as possible with your organizational plan. Even if you’re not planning on passing your issues down to future generations, you should definitely invest in bags, boards, boxes, or some other means of storing and protecting your books.

My spreadsheet system is fairly new, but it has worked really well for me so far. I know where everything is and the boxes are much neater than the unruly stacks I once lived with. The spreadsheets have helped remove both the physical clutter from my living space and the litter from my brain, freeing up both spaces for more comics. And that should always be the goal.