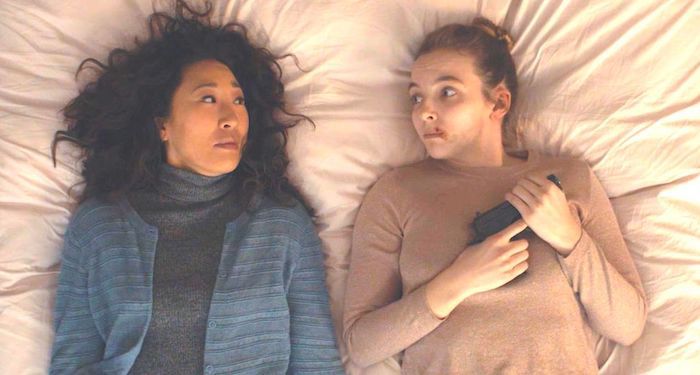 This post originally appeared in Book Riot’s Our Queerest Shelves newsletter. Sign up to receive news and recommendations for readers of LGBTQ books.

Something happened in the finale to Killing Eve. You know what’s funny? I would bet a majority of you reading this already know what it is, even if you have never watched an episode, just from that sentence. (If you don’t and you don’t want to know, maybe skip this post, because it will be implied. I won’t discuss it directly, though.)

Queer media has a special relationship to spoilers. For a brief moment on the queer bookternet, there was a debate about whether mentioning a character’s orientation or gender identity in a review counted as a spoiler. Pretty quickly, it was summarily declared that no, that’s not a spoiler. Even if the character doesn’t come out until 3/4 of the way through the book, you’re still within your rights to talk about it as a queer book and name the specific representation included. As a queer bookish community, we have rejected the idea of queer identity as plot twist.

(Spoilers for Buffy the Vampire Slayer and The 100 ahead!)

Before I started watching Buffy proper (I had seen episodes here and there as a kid, but I didn’t sit down to watch it from beginning to end until college), I knew Tara died. I couldn’t tell you where I learned it, but it was an event that permeated the sapphic consciousness. Similarly, I knew almost the moment Lexa was killed on The 100 — in a depressingly parallel way to Tara — despite not watching the show and not seeking the information out.

I was glad for these spoilers. While most media outlets would see a backlash to spoiling a TV show in the title of an article, those responses were rare in these cases. That’s because many queer people only want to pick up a book or start a TV show with queer characters if they know those characters are okay in the end.

When Lexa died, Autostraddle put together a list of the hundreds of dead sapphic characters on TV from 1976 to the present. They determined that bi women and lesbian characters were exponentially more likely to be killed off than straight characters.

This phenomena (dubbed “Bury Your Gays”) isn’t isolated to TV. In the days of lesbian pulp fiction (mostly the 1950s-60s), there were hundreds of books about lesbians — but to get past the censors, they had to have an unhappy ending, so it didn’t seem like the books were condoning homosexuality. Some popular strategies were killing a character off, having a character magically become straight again, institutionalizing one, etc., etc.

This is the foundation from which we consume queer media. Although it’s improved a lot in recent years, most of us are still all full up on stories that imply that being queer leads to a tragic end. For queer people just coming out or who live in a hostile environment, queer media is usually a way to escape, and getting hit with the death of a character you relate to when you were looking for something affirming and comforting can be devastating.

This is why spoilers take on a different meaning when it comes to queer media. Most people who write about queer media online have a sense of responsibility to their readers, an obligation to warn them about media that may be harmful. This overrides any concerns about spoiling a TV show or book.

When I watched Buffy, I was braced for Tara’s death. (I was not prepared for her to temporarily lose her connection to reality, a deep fear of my own, so that sent me into a tailspin.) I’m grateful that it was spoiled for me, because as I empathized with this character and saw my queer identity reflected in her, I also some defenses put up. I can’t imagine what it would have been like to see her happiness snuffed out by a stray bullet if I hadn’t seen it coming.

So, if you ever wonder why a queer review site or blog spoils a major character’s death, that’s why. We rely on each other to alert us to stories that could reopen old wounds. It may be that you don’t need those kinds of warnings, but as long as some of us do, I’ll always be on that side of the spoiler line when in comes to tragic queer media.

And just in case, here are some links that you might find helpful right now: