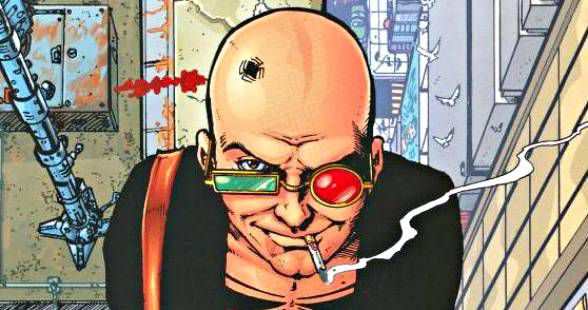 I’m not huge on superheroes, which means that my movie-going has been seriously curtailed in the past several years. It also means that I was slow to get into comics; as a kid in Kentucky, my comics options were pretty limited and I ended up reading a lot of Archie. I’ve been trying to make up for it as an adult, though, especially since I got a full-color tablet I could read on; recently, I picked up the full run of Transmetropolitan by Warren Ellis and Darick Robertson and I immediately got hooked on this eerily prescient comic.

A cyberpunk comic that ran from 1997 to 2002, Transmetropolitan features a journalist, Spider Jerusalem, living in a politically corrupt future America. The journalistic scene in this future America is pretty grim: most news is recycled from press releases with zero investigative journalism going on. The one exception is Spider, a self-professed bastard who has a need to tell the truth at all costs. 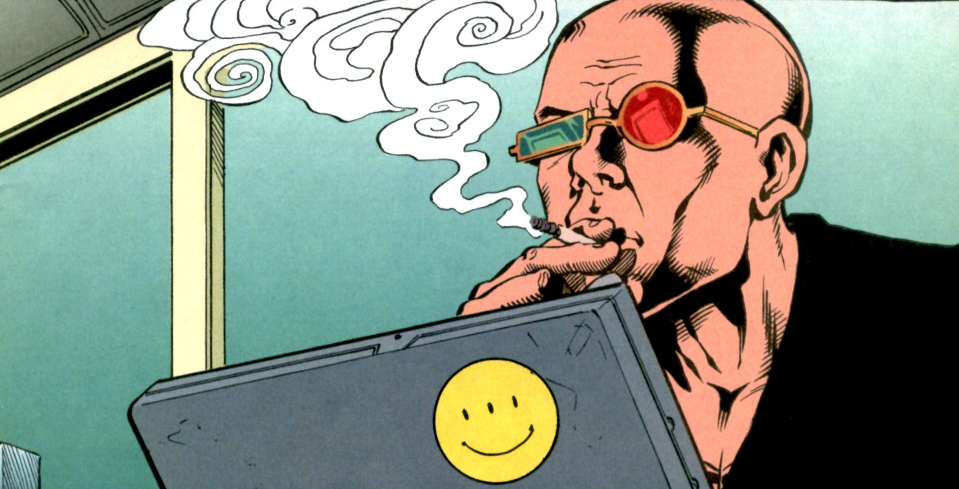 One of his major entanglements in the series is a presidential election. One of the major candidates, Gary Callahan aka “The Smiler”, is a sociopath who wants to become president only because he wants to be the president. (This seems so familiar, somehow.) This dude is a total scumbag: he does some seriously underhanded shit in the effort to get elected (gee, where do I know this from), he tries to silence the press when they criticize him (ooh, déjà vu), and the only person willing to do any digging into the candidate is Spider. What Spider finds affronts him so much that he makes it his personal mission to ruin Callahan’s career and probably life.

Callahan uses his political power to try to make Spider’s life a living hell. He doesn’t like being crossed–people who are so intoxicated by power usually don’t. Spider keeps crossing him anyway, regardless of what personal mayhem comes to him. He keeps digging to find the truth and he keeps telling it when he finds it. 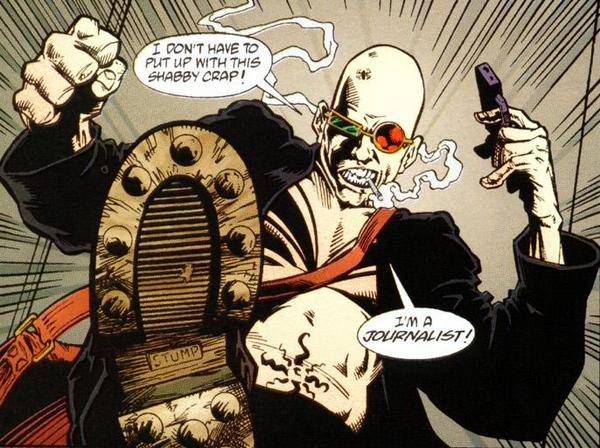 I need Spider Jerusalems in the world right now, so much. One of the big themes of our current political climate is–well, depending on which side you’re on, curtailing the press from being “unfair” or preserving the free press in the face of a threat. I’m on the side of preserving the free press, being a sane and moral individual who understands that shielding oneself from criticism doesn’t make one’s actions correct. (Was that too biting? Wait, no–probably not biting enough when we have a President-elect who literally wants to sue news agencies that criticize him for “lots of money”, essentially a threat of financial ruin.) My heroes right now are the people who stand up against that: people who tell the truth in the face of someone powerful threatening to ruin you for that truth.

I really hope that, in between superhero blockbusters, maybe we can squeeze in a film adaptation or a new series of Transmetropolitan. At the very least, if you haven’t read the series, I highly recommend picking it up. (It’s pretty R-rated, just so you know in advance–not good for kids.) I binge-read about sixty issues in two or three days. It’s addictive. It’s soul-revving for the potential fights ahead. It’s a little ray of hope shining into dark corners. It’s just what I needed right now, and might be just what you need, too.