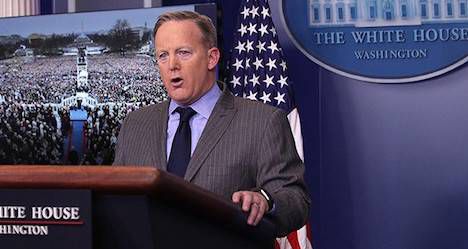 A few days into the Trump presidency in America, and it feels like we’ve stumbled into an alternate universe. Comparisons have been drawn between our current state of affairs and works of dystopian literature: The Handmaid’s Tale, The Hunger Games, you name it. But in light of the Spicer and Conway show hitting the road, George Orwell’s 1984 feels the most apt.

But first, reality check. Between the bathroom bills, police brutality, and tainted water in places like Flint, Michigan — well, things have been dystopian for a while now, especially for marginalized populations. What’s different now is the utter lack of subtlety on the national stage.

This election’s been a journey, but turns out, it was just the teaser. Enter White House Press Secretary Sean Spicer. On Day 2 of the Trump era, ol’ Spicy Spicer scolded the media, all while lying about the inauguration crowd sizes. Cue the Twitter hashtag #SpicerFacts. The internet was not having Spicer’s brand of stale hot Cheetos soaked in pee.

Lucky for him, Kellyanne Conway had it handled. Sort of. Looking straight into the camera like it was the abyss, she claimed that Spicer was just giving “alternative facts.” Back in the before time, we had “spin.” Now, we have fun new phrases like “post-truth,” “fake news,” and “alternative facts.”

Any of this sound familiar? High school English is back with a vengeance. We haven’t quite hit Orwellian Newspeak levels, but we’ve got a fresh set of vocab to work with. In 1984, the goal of Newspeak is to stamp out free thought and free will via language. As the Party slogan goes…

And how do you control the past? You rewrite it. You lie about it, brazenly and aggressively and constantly. When Spicer and Conway did their tag-team pants-on-fire act, their actions echoed that of 1984: “The Party told you to reject the evidence of your eyes and ears.”

We have video, text, and Twitter (yikes) evidence contradicting much of what the Trump campaign puts out. And yet, the baldfaced lies keep coming. But unlike in 1984, we can still factcheck. So why bother with the lies? Well, 1984 can tell you:

“In the end the Party would announce that two and two made five, and you would have to believe it. It was inevitable that they should make that claim sooner or later: the logic of their position demanded it. Not merely the validity of experience, but the very existence of external reality, was tacitly denied by their philosophy.”

Creepy, right? These days, pointing out that two and two makes four is starting to feel like an act of defiance. And if you give up, it might feel something like this:

“It was like swimming against a current that swept you backwards however hard you struggled, and then suddenly deciding to turn round and go with the current instead of opposing it. Nothing had changed except your own attitude: The predestined thing happened in any case.”

Call me old-fashioned, but I like the words I grew up with — “lies” and “propaganda.” If someone’s lying, just say that. Don’t call it a “controversial position.” If a news outlet is putting out false information that’s politically motivated, that’s not par for the course in a post-truth world. That’s propaganda.

We don’t have to live in a post-truth world. People can and should be held accountable for what they say on the news and in the White House. Spicer and Conway do not in fact have a parasitic Trump on the back of their heads, leeching away their life force Quirrell-style. They’re regular people. Just because they say that two and two is five, doesn’t make it so.

There are lessons to be learned from fiction, and even more lessons to be learned from being able to distinguish between fiction and reality. The other day, I looked up the Chinese translation for “conspiracy theory,” and it’s proving useful in daily conversations. In these trying times, I plan to hang onto the sparkling, genuine things we call facts. I have a feeling that in the coming years, there will be nothing so beautiful as the truth.