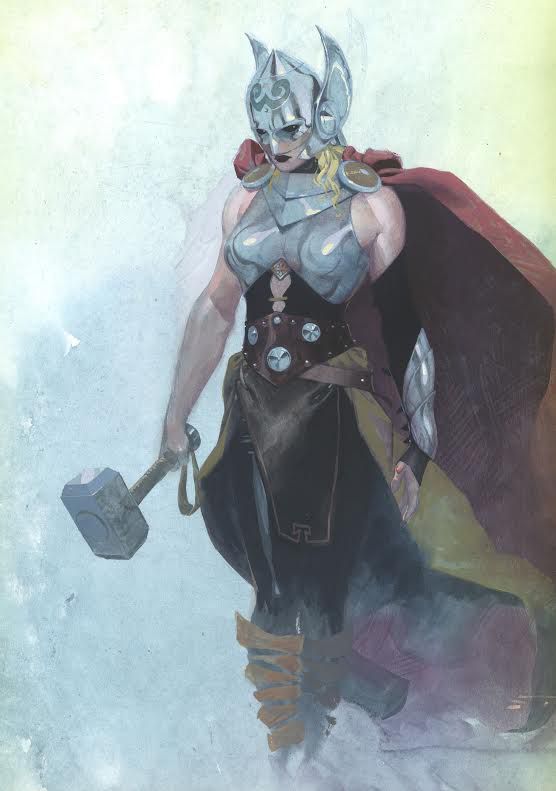 Speculation Station is your stop for all the things we don’t know about comics. Whether we have a pretty safe bet, a few clues, or no ideas at all, this is our place to hypothesize about what’s going to happen in our favorite comics.

Let’s face it, you can’t swing a dead tribble around a comic book shop or forum without someone talking about the new female Thor (known here and in the comics as simply ‘Thor’). Jason Aaron’s Goddess of Thunder has shaken up the Marvel Universe and its readership in the past few months as everyone wonders just who she is. Immediately he has lain down the framework of what promises to be a mystery for both the reader and the Odinson (the new name of the original ‘Thor’) for many months. But to be honest, they may have given away too much too early.

Clue from Issue #1: A woman in dark garb appears on the moon and says, “There must be a Thor”.

Clues from Issue #2: The focus on her armor and not the change in her body means that she’s post-pubescent and we aren’t dealing with some underage girl going all SHAZAM on us. She also has met Dario Agger of Roxxon.

So I went back and read all of his appearances from Thor: God of Thunder all the way up through Thor #5. Only one woman has met Dario Agger face-to-face and only one more can be supposed to have met him in Broxton: Roz Solomon Agent of SHIELD and Jane Foster, ex-gf and cancer-stricken doctor.

So let’s zoom through the other clues.

Clue from Issue #4: Her thought bubbles betray that she feels more concerned about her image as a hero than anything truly deep about Thor.

Clue from Issue #5: She notes how sharp Freya is. Thor also thinks about what the hammer is doing to her—something that’s cut off as she’s interrupted.

So I am betting with 99% certainty that the all-new Thor is Roz Solomon, Agent of SHIELD.

So is that it? Are we done here? Not really.

Why is the Odinson unworthy?

At the end of Original Sin Nick Fury whispers something into the Odinson’s ear. Something short but so awful that it tainted his very character and made him unworthy of his own hammer. What is it? What clues do we have? None. Not even a minor teensy one. We only have speculation and only a fool would go on some sort of stupid rant based on pure speculation.

So I’m speculating that only something intensely personal could have affected the Odinson so much. I suspect that this is an unseen result of an action he performed in recent days. And I further suspect that the only thing that could affect the God of Thunder so much in just a few short words is one of two things – he either somehow gave Jane Foster cancer, or he had unknowingly killed a family member.

Now I doubt he gave Jane Foster cancer because we’ve seen that already in another Avenger’s story when Hulk accidentally killed Betty Ross way back when. So I’m going to go with he accidentally killed a family member. So who has the Odinson killed recently? Bor we’ve already dealt with. Cul we know is alive and well and that didn’t make him worthy again. And the Sentry he- wait. Wait… The Odinson has been around for a very long time. Our recent adventures with Jason Aaron have focused more and more on the God of Thunder throughout the ages. What if… What if at some point, the Odinson impregnated a human woman? What if Robert Reynolds was in fact either the God of Thunder’s son or his direct descendent? What if the Sentry is Robert Reynolds Thorson? Did the God of Thunder kill his own son? That certainly would make him unworthy. It would not explain, however, the changes in Mjolnir. Why is it choosing its own owner? Why is it flying with such maneuverability and speed all of a sudden? Why is it communicating with Thor? And why are so many fools so angry that Thor is a woman?

But I feel good about this. I feel 12% sure that the Odinson is unworthy because the Sentry was his son. (12% that’s barely a guess)

Some of these answers we’ll only find out as we read on, and if you’re like me, you’ll be on the edge of your seat the whole way through. What do you think about the identity of Thor and Odinson’s unworthiness?