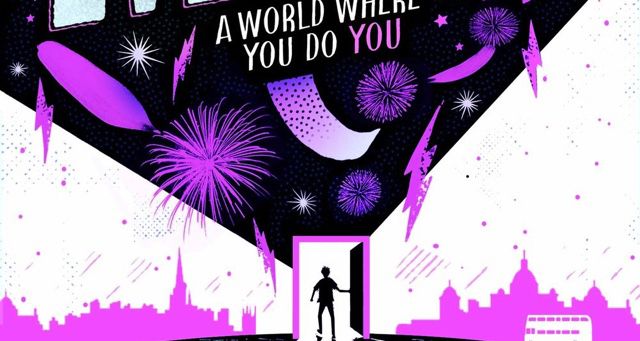 Last Bus To Everland by Sophie Cameron is a powerful new YA about a bullied teen who finds redemption in a parallel universe in Edinburgh. Fans of magical realism with strong LGBTQ heroes will want to get their hands on it ASAP.

I was very fortunate to sit down with Sophie to talk about her great new novel. 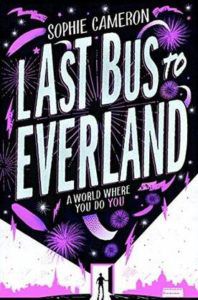 Lucas Maxwell: When Brody first enters Everland, it’s very overwhelming for him. How did you decide what he would see when he first entered? What inspiration did you draw from to describe it?

Sophie Cameron: I was mainly inspired by the settings in the film The Fall, art installations at Burning Man Festival, Narnia, and of course, Peter Pan’s Neverland. Everland is a place that people can access from all over the world, so I also wanted to include different types of festivities and celebrations, such as Holi and Carnaval. Overall I wanted it all to be very sparkly and colourful, to contrast with the dreich Edinburgh night that Brody leaves behind, so I tried to emphasise those aspects while also making it all a bit of a whirlwind.

LM: I’ve never been to Edinburgh, but I felt completely at home in how you described the city. What makes it such an attractive place to set a novel in your opinion?

SC: Edinburgh is a really beautiful city and has a strong literary tradition and lots of interesting history and [folklore] – Last Bus to Everland is actually based on a local 17th century folk tale called The Fairy Boy of Leith, about a Captain who meets a boy in Edinburgh who claims to go to Calton Hill every Thursday to drum for the fairies. I think for me, though, what makes Edinburgh so enjoyable to write about is that I know it really well and love it so much. Hopefully that comes through in the writing!

LM: Brody finds some solace in working at the record shop. Did you have a certain soundtrack that guided you through the writing process of this novel?

SC: The main song I listened to was ‘Colors’ by Halsey – I thought that that song perfectly encapsulated the sort of vibe I was trying to create for Everland, so I must’ve listened to it at least a thousand times! ‘Not Going Home’ and ‘Find Yourself’ by Great Good Fine Ok were on repeat a lot, too. I have a playlist that you can listen to here.

LM: Brody’s dad has agoraphobia and it is written into the novel superbly. How challenging is it to write about phobias, fears and mental illnesses without coming across too heavy-handed?

SC: It is challenging, especially as one person’s experience of a certain phobia or condition can be entirely different [from] someone else’s. I wanted to make sure that Brody’s dad isn’t defined by his agoraphobia and show that it doesn’t stop him from being a loving and supportive father. I also tried to portray Brody’s own frustrations with his dad’s condition and the effects it has on the family, whilst also making it clear that Brody does have a lot of empathy and understands that it’s an illness.

LM: I love that as a kind of paradise, Everland has probably the best library in existence. As someone who did not have a good library in their school, I now know how vital they are. How important were libraries to you in your school life or beyond?

SC: I spent a lot of time in libraries when I was younger: the library at my secondary school was good, and as we lived in a rural area there was a library van that would visit our village regularly. I was very fortunate in that my parents also bought me lots of books, but librarians definitely helped to expand my literary horizons by introducing me to new or different authors. As I live in Barcelona I find most of my books online now, but I do still love going to my local library when I’m looking for something to read something in Spanish. They’re vitally important, especially for readers and writers from less privileged backgrounds.

LM:  Although it’s a kind of utopia, I felt sorry for any character that decided to stay in Everland, because I wanted to see them face their real world troubles and succeed. Did you feel the same way about these characters as they developed? Without spoiling anything of course, did you struggle with them just as they struggled with deciding whether to stay or leave?

SC:  I felt sorry for them too – essentially, staying in Everland means giving up on real life and all it has to offer, and obviously it has huge implications for the people they leave behind. I knew from the beginning which characters were going to stay there, but it was quite difficult to write it. I actually got quite teary at the end!