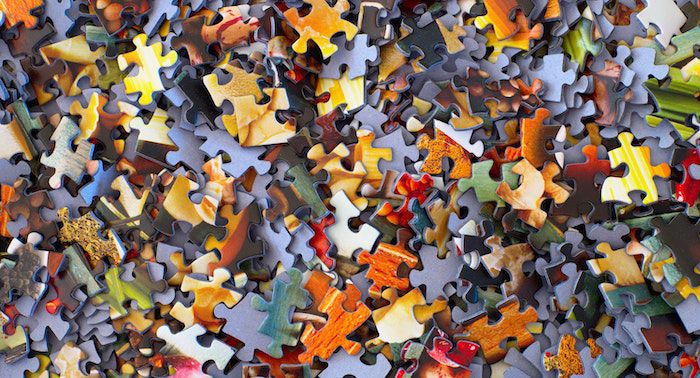 Critical Linking, a daily roundup of the most interesting bookish links from around the web is sponsored by Themes and Variations by David Sedaris.

“Need a fun mental break? We’ve created six digital jigsaw puzzles through Jigsaw Explorer that feature a few favorite images from our collection. Play them right here on our blog or use the links to expand an individual puzzle. Each puzzle is set to contain about 100 pieces, but they are customizable for any skill set. Hit the question mark icon on a puzzle for more information. We’ve tested these with staff (and kid volunteers!) and hope you enjoy them as much as we did!

All of these images are freely available through our Image Gallery, Digital Library or Biodiversity Heritage Library. Feel free to explore, download other images and maybe make your own boredom buster!”

Why, yes, I did automatically go for the reading woman surrounded by books jigsaw puzzle.

“In the early sixties, when Sjöwall and Wahlöö were formulating their idea for a ten-volume police procedural that would mirror the whole society, nothing of the kind had ever appeared in Scandinavian literature. America may have produced Dashiell Hammett and Ed McBain by then, not to mention numerous noir detective films and even some early urban TV shows, like Dragnet, that edged toward this territory. But the Scandinavian tradition was different. There were mysteries, true, but they utterly lacked the broad social perspective, the insistence on some kind of realism, that Sjöwall and Wahlöö were about to introduce.”

If you woke up today wondering the origin of Scandinavian noir.

“For nearly two years, Nadia Hallgren has been keeping the biggest moment of her career a secret from even her closest friends. The Bronx-born cinematographer just directed her first feature, Becoming, a documentary about Michelle Obama which Netflix announced just a week before premiering the film on its service May 6.

The Obamas’ Higher Ground production company hired Hallgren to follow Michelle Obama on the 34-city, 2018-2019 book tour for her memoir, Becoming, during which the filmmaker captured intimate moments with family, staff and the thousands of mostly female fans who flocked to see the groundbreaking former First Lady. Hallgren, who finished the movie at Skywalker Sound the day before San Francisco went on lockdown in mid-March, spoke with The Hollywood Reporter from her home in Rockaway Beach, Queens.”

She deserves an award for keeping this secret!