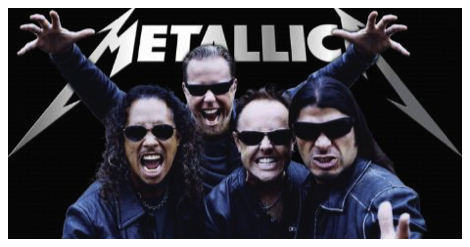 Metallica is arguably one of the biggest bands in the world today. Since their debut album Kill ‘Em All, released in 1983, the band is estimated to have sold over 110 million albums worldwide. With younger generations continuing to discover the catalogue of this Bay Area thrash metal band, their popularity only keeps increasing.

One of the reasons why Metallica has such lasting appeal is their amazing songwriting skills. Not only do they write songs that are progressive as well as catchy, their lyrics are often based on literary classics.

Writing songs inspired by literature is something that Metallica has done throughout their career. Already on their second album Ride the Lightning (1984) you find the heavy metal classic “For Whom the Bell Tolls,” which is based on an incident in Ernest Hemingway’s novel by the same name, published in 1940.

Even though Metallica early on in their career became the biggest band in the genre of thrash metal, it wasn’t until their fourth album, … And Justice for All (1988), that the band filmed a music video. For their very first video they chose the song “One,” based on Dalton Trumbo’s novel Johnny Got His Gun.

On several occasions throughout the years Metallica has returned to one particular author and his work, namely H.P. Lovecraft and the Cthulhu Mythos. In addition to the song “For Whom the Bell Tolls,” the album Ride the Lightning also features the song “The Call of Ktulu,” which is based on H.P. Lovecraft’s short story “The Call of Cthulhu,” first published in 1928.

In Reading Color Newsletter
A weekly newsletter focusing on literature by and about people of color!
Thank you for signing up! Keep an eye on your inbox.
By signing up you agree to our terms of use
[youtube]https://www.youtube.com/watch?v=t1RTgznup5c[/youtube]

Metallica returned to Lovecraft and Cthulhu already on their next album, Master of Puppets (1986) where the song “The Thing that Should Not Be” is inspired by Lovecraft’s The Shadow over Innsmouth, published in 1936.

Several years went by before the band paid another visit to the world of Cthulhu, although this time by way of the work of another author. On the album Death Magnetic (2008), the song “All Nightmare Long” is based on Frank Belknap Long’s story “The Hounds of Tindalos” from 1929. These creatures were later mentioned by Lovecraft in his short story “The Whisperer in Darkness” from 1931.

What other songs by Metallica based on literature would you like to include here?