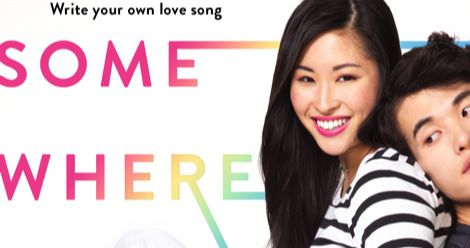 Looking for a YA novel to add to your rom-com TBR? Check out Maurene Goo’s Somewhere Only We Know, and read the excerpt below! 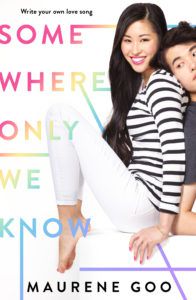 Sparks fly between a K pop starlet and a tabloid reporter in this heartwarming rom-com from Maurene Goo.

10:00 p.m.: Lucky is the biggest K-pop star on the scene, and she’s just performed her hit song “Heartbeat” in Hong Kong to thousands of adoring fans. She’s about to debut on The Tonight Show in America, hopefully a breakout performance for her career. But right now? She’s in her fancy hotel, trying to fall asleep but dying for a hamburger.

11:00 p.m.: Jack is sneaking into a fancy hotel, on assignment for his tabloid job that he keeps secret from his parents. On his way out of the hotel, he runs into a girl wearing slippers, a girl who is single-mindedly determined to find a hamburger. She looks kind of familiar. She’s very cute. He’s maybe curious.

The elevators were at the end of the hall, and there was one open and waiting for me. I ran inside and hit the button that said “1,” feeling myself relax, when a hand gripped between the doors and pushed them open. Shoot. I stepped back into the corner and hid my face.

“Thanks,” a guy’s voice said. I glanced up. It was some young Asian guy clutching a jacket. I shoved myself farther into the corner, as far away from him as possible. But he wasn’t paying attention to me.

The dude was grinning and pulling on a wrinkled blazer. Then he untucked his shirt and fluffed up his hair.

I couldn’t help but look at him. What a weirdo. Cute weirdo. Incredible hair. Tall. Broad shoulders coupled with long limbs. But totally giving off the strangest vibes. A kind of manic euphoria. I inched closer to the wall when he started chuckling as he looked through his phone. Okay, sir.

I tried to calm my racing heart, praying for no more passengers. Luckily, there weren’t any, and I barely breathed until the elevator stopped on the first floor.

When I stepped out, I was in a carpeted hallway, not the lobby. I glanced back at the elevator in confusion.

“If you’re looking for the ground floor, that’s level ‘G,’ ” the guy said, barely looking up from his phone.

With as much pride as I could muster, I said, “No, this is it,” and strutted away. Despite not knowing where the heck I was. In hotel-room slippers.

Hotels. I knew hotels. I would go in the lobby and ask, low-key style, where the best burger was. So I took the stairs one flight down.

Piece o’ cake! I got this! I stepped in rhythm to my cheerleading. This is nothing. Remember that week when you slept for eight hours total and had to be hospitalized for dehydration during the MTV Asia Awards? This sneaking around is freaking nothing!

The impeccably designed lobby was no-frills. My managers always booked me in discreet boutique hotels, hoping they would be better hideouts than big showy ones.

Two of my security guards were chatting idly by the valet stand and I hid behind a giant potted palm next to the front desk.

“Hi, there,” I greeted the front desk staff with what I hoped was a chill, very normal voice. “Would you mind pointing me to the nearest delicious hamburger?”

One of the young men behind the counter smiled serenely. “Of course, miss, there’s an American-style restaurant in the mall that is connected to the hotel.” His head was turned in the direction of the door but then he slowly looked back at me, recognition dawning on his face.

Blast. Even without the pink hair, I might be recognizable. I lowered my cap. “Thank you very much!” I called out over my shoulder as I slipped through the glass double doors into the mall.