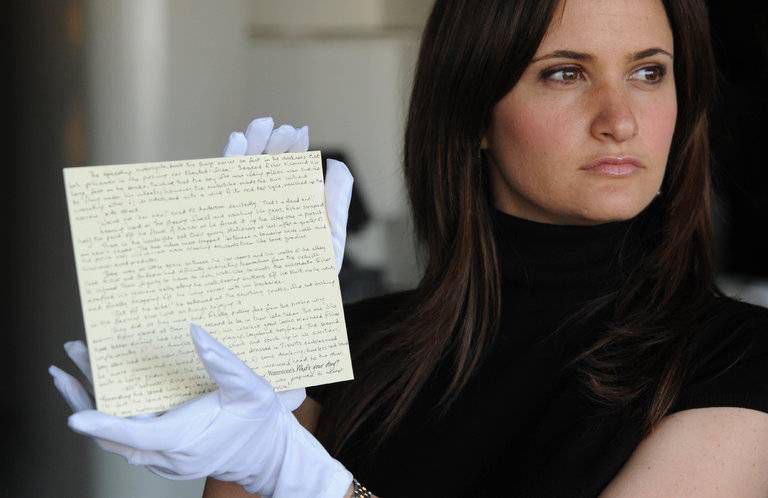 Last month, a rare item in the Potterverse was stolen during a home burglary in Birmingham, England: a handwritten 800-word Harry Potter prequel that J.K. Rowling auctioned off for charity in 2008.

(Yes, I would be having a heart attack if that happened to me, too.)

Rowling wrote the prequel on two sides of an A5 postcard; the story features James and Sirius as cheeky lads who get into a scrape with Muggle police, prior to Harry’s birth. The card sold for £25,000, which is about $32,100 at current exchange rates, according to The New York Times. The story was subsequently released in Waterstones bookstores and set a record as the fastest-selling short story of all time.

The story originally sold during an auction to benefit English PEN, an organization that fights for literary freedom of expression and that works with marginalized writers, and Dyslexia Action, an organization that helps with training for teachers and teaching staff so that they can more effectively work with students who have learning difficulties. Twelve other authors participated in the auction, including Margaret Atwood, Tom Stoppard, and Irvine Welsh.

While you might be tempted to go full Slytherin and ambitiously try to own this manuscript for yourself, J.K. Rowling really hopes that you don’t. She asked people via Twitter not to buy the manuscript:

PLEASE DON'T BUY THIS IF YOU'RE OFFERED IT. Originally auctioned for @englishpen, the owner supported writers' freedoms by bidding for it. https://t.co/ljEQyyj9yY

So, you know, if you have an extra many thousands of dollars lying around, please do not use it for this Harry Potter manuscript.

We don’t know at this time who stole the manuscript. The burglar(s) also stole jewelry. If you have any information, or if someone tries to contact you promising to sell you a super-rare manuscript and they seem suspicious, West Midlands Police have instructions on how to report helpful information. You can also report anonymously.

In the meanwhile, if you’re really keen to have a copy of this for your Harry Potter collection, you can find used copies of What’s Your Story? , a volume of the collected auctioned postcards, on the internet. Available for about $30 at the time of this writing, it’s a comparative bargain and you will have the warm, fuzzy feeling of not participating in a felony. (Please do not participate in felonies. We like you and don’t want you to go to jail.) It’s also available to read on Crushable.