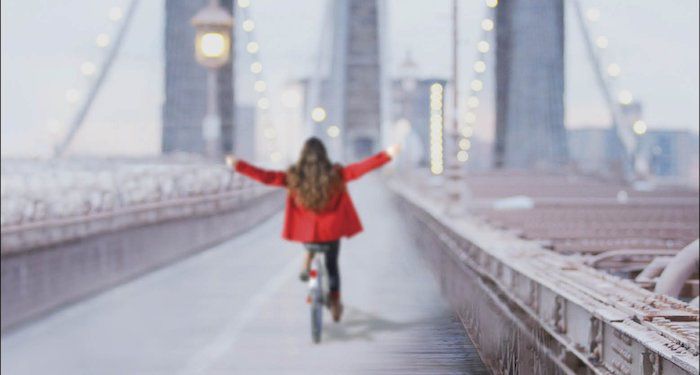 It comes as a shock to most people when I tell them that, the first time I read Lauren Graham’s work of fiction Someday, Someday, Maybe, I was completely unfamiliar with her acting work. (Shocking, perhaps, because just a few years later, I would become a passionate fan of both Gilmore Girls and Parenthood, as well as start co-hosting a Gilmore Girls podcast.) But truth be told, my initial introduction to Graham was as an author.

The year was 2014, and I just happened to come across a paperback copy of Someday, Someday, Maybe on the shelves of my closest book retailer. This was also long before I started using Goodreads religiously to plot out my next read, so my process for finding new titles was quite literally browsing bookstores and buying whatever I felt a connection to. (I both envy and pity the bookworm I was then.) But in this case it happened to work in my favor, because I was very into contemporary novels by pop culture-savvy authors like Rainbow Rowell at that time, and Graham’s book most certainly fell into that category. I devoured it quickly and lovingly, imagining it as a heartfelt coming-of-age ‘90s movie playing out in my head, and it immediately became an all-time favorite.

Someday, Someday, Maybe follows the mis-adventurous 20s of Frances “Franny” Banks, an aspiring actress who had moved to New York City three years prior to chase her dreams. She promised herself that she would only let herself try to fulfill this dream for a realistic amount of time, setting a deadline for it to expire so that she doesn’t live out the rest of her life in denial that fame and fortune might still be right around the corner. She lives with her best friend Jane in a Brooklyn brownstone along with Dan, their new roommate found through a mutual friend. Franny also has a college sweetheart, Clark, in Chicago, whom she figures she’ll eventually just marry and stop kidding herself with the notion of being in show business. The novel opens in January 1995 as Franny’s deadline is six months away, and she has to decide which path, in several senses of the word, she truly wants to take.

Although the connection I immediately felt to Someday, Someday, Maybe was no doubt a result of Graham’s versatile talent, her heartfelt characters, and the eternal struggle of being an aspiring artist, I was in my last year of high school the first time that I read it. Not to say I couldn’t see myself in the characters or their problems whatsoever, but it goes without saying that, at 17, it’s laughable to think that anyone can truly comprehend the quiet storm that usually awaits the start of emerging adulthood. To paraphrase Glinda sending Dorothy back to Kansas, I wouldn’t have believed you if you’d told me then. I had to learn it for myself, as I think everyone does.

The second time I picked up Someday, Someday, Maybe was two years later, but it might as well been a decade as far as I was concerned. It was my second year of college, and I had spent the better part of that year coming to terms with my chronic anxiety for the first time. At that time, I read books like my life depended on it — even for pleasure — because I’d internalized the notion that as a literature student my sole purpose in life should be how fast and how well I can analyze books. It sounds like an exaggeration, but it really isn’t: at that time in my youth, I made my studies my entire being, because the very thought of having to grow into a real-life adult human sooner or later caused such paralyzing anxiety that I could barely function.

One of the only ways I coped with that stress was reading, for better and for worse, and my therapist suggested perhaps rereading an old favorite when I found tasks like reading for pleasure unbearably overwhelming. Thus I reread Someday, Someday, Maybe, and while the characters and their situations still remained somewhat fresh in my memory, it was much easier now to picture myself in their shoes. But I never would have dared to say that out loud at the time, in fear of having to let go of the child obsessed with perfection and welcome a flawed, imperfect but still lovable new version of me.

Somewhere in my head I knew that a lot of the stress I put on myself back then was unnecessary, but I just couldn’t see far enough ahead of myself into the future to picture who I wanted to be at all. Much like Esther Greenwood in The Bell Jar, at 19, I just couldn’t see a single pole beyond the 19th. “It’s torture telling someone what you want when you don’t have it yet, isn’t?” Franny’s prospective agent Barney Sparks asks her. “How are you supposed to know yet, am I RIGHT?” Alexa, please play “How Do I Deal” by Jennifer Love Hewitt.

Turns out young adulthood would get a bit better after that, then worse again, then better, and worse some more before I realized that this is just how life goes sometimes in your twenties. My silent epiphany reading Someday, Someday, Maybe the second time resulted in me gifting it to the first two real friends I made in adulthood at my first long-term part-time job, since it felt like giving them a part of me. Although I was never able to let go of the pressure to make my university experience count for something until the pandemic (an issue we’ll talk about another day), I felt I’d definitely grown and come a long way from the overemotional 19-year-old who couldn’t cope with the most basic tasks of being a grownup. Then Miss Rona made her stage debut and everything changed irrevocably.

If you had asked me even six months ago what I thought would have been the most difficult part of living through the COVID-19 pandemic, I would have never predicted that it would be reintegrating into society after 18 months at home. I was not in a great place emotionally right before the pandemic began, and while I worried for the longest time that returning to civilization would mean immediately resuming those difficulties, I soon realized that the most authentic and grown up version of myself to date grew out of all the time spent at home overcoming countless daily stressors. But that unfortunately didn’t erase all the time spent away from the world, nor the fact that almost every aspect of daily life remains incredibly altered. I picked up Someday, Someday, Maybe for the third time right before going on anxiety medication for the first time.

Reading Graham’s novel now well into my 20s felt like the literary equivalent of flipping through an old photo album. As a teenager, I could use my imagination, but as a twentysomething every word of every page felt like a hand reaching out and saying, “Hey, you were never alone. See? This is just how it goes sometimes. Hard then better then hard again, but all still worth living through. You have to grow through the hard parts to get to the better parts.” Part of me wishes to go back and tell this to my 19-year-old self, but just as Glinda said to Dorothy, he wouldn’t have believed me. He had to learn it for himself.

Rereading Someday, Someday, Maybe also reminds me to just have a little faith in the universe sometimes, especially concerning other people’s opinions. (The book has a lot of remarkably low ratings on Goodreads, mostly because it was written by a celebrity which makes everyone on the internet scream, “Stick to what you know!”) Regardless, Graham more than displayed her knack for fiction here and it’s a shame she has yet to write any more novels. For a time, Someday, Someday, Maybe was in development to be adapted as a series, but it never materialized — for which we were 100% robbed, because don’t we deserve a ‘90s coming-of-age period drama about a twentysomething actress and her friends/love interests in New York City, all set to a modern remake of the theme song from Felicity, “New Version of You”? (Okay, maybe I just really love the Felicity theme song.) I’m nonetheless grateful for the one version of the novel that continues to exist, and I can only hope it has carried others through adulthood as well.