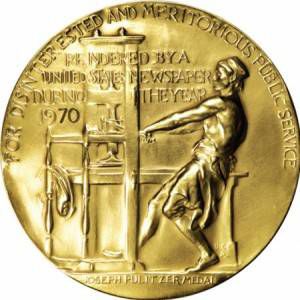 Today the Pulitzer Prize committee announced the 2012 winners. You can take a look at the list of winners here, but don’t look too hard for the fiction winner….there isn’t one.

Yes, for the first time since 1977 and the 11th time since the Pulitzer began giving awards for fiction in 1917, we don’t have a winner. The mechanism for awarding the Pulitzer is a little strange and plays a major role here. Basically, a set of jurors selects finalists that goes before the Pulitzer board, who then vote on what should win. If none of the finalists gets a majority of the vote, no award is given. It’s worth nothing that the board is not made up of specialists, but rather  journalists and academics—there is only one literary name on the board, Junot Diaz.

The fiction jury nominated three books to the board: Karen Russell’s Swamplandia!, Train Dreams by Denis Johnson, and The Pale King by David Foster Wallace.

I think reading anything about “the state of American letters” here is unproductive. While I myself didn’t think 2011 was a great year, 2010 was and 2012 is shaping up to be.

Here are a few uncollected thoughts:

1. I am totally fine with this. In  fact, I kinda like it. It shows me a couple of things. First, the Pulitzer is OK with not giving an award, and I like that. Second, it exposes the unavoidably limited nature of any literary award, which I think is too the good. Third, it stirs the pot. Also fun.

3. Should the Pulitzer change its policy to giving the award to the book with the most votes, rather than requiring a majority? Probably. I would think that as American literature gets increasing diverse, consensus about excellence will be increasingly difficult.

4. If we had it to do over again, what books should have won the award in years where no award was given? This is just my game.

Here are a few titles for each year no award was given that maybe, in hindsight, were worthy:

1977: Will You Be Quiet, Please by Raymond Carver (his debut collection) and A River Runs Through It by Norman Maclean

1971: The Bluest Eye by Toni Morrison

1964: The Group by Mary McCarthy, The Bell Jar by Sylvia Plath, Cat’s Cradle by Kurt Vonnegut

1954: Fahrenheit 451 by Ray Bradbury, The Long Goodbye by Raymond Chandler

1941: For Whom the Bell Tolls by Ernest Hemingway, Native Son by Richard Wright