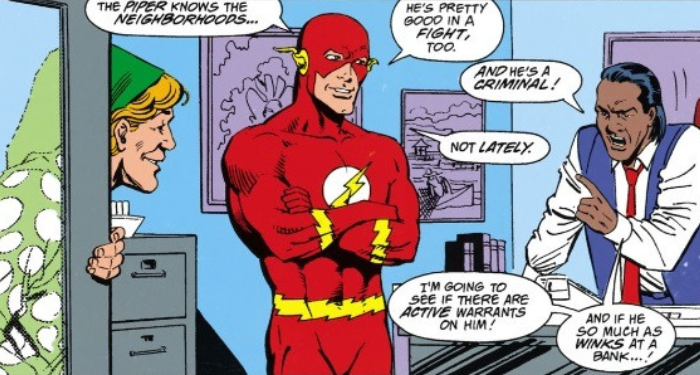 Traditionally, comic book heroes and villains tended to stay in their lanes: the good guys were good and stayed good (except for the occasional blip here and there), and the bad guys were bad and stayed bad. It was a nice, predictable state of affairs. But nothing stays safe and cozy forever. So what are you supposed to do when someone you’ve spent the last year punching off rooftops says they’d rather be helping you do the punching?

To our heroes’ credit, they are generally quick to welcome their former foes into the fold, even offering varying levels of personal or professional support as the ex-villains try to stay on the straight and narrow. And in return, the ex-villains featured here have dutifully remained on the side of the angels, except for the one who has already become an angel herself.

There’s probably a point to be made about how supporting your fellow human beings (and an occasional rogue robot) is a better remedy to a life of crime than just throwing them in jail. But we don’t have time to dig into that here. Instead, let’s look to our heroes for guidance on how to deal with an unexpected new ally.

Watch Them Have an Existential Crisis

Red Tornado barged onto the scene in Justice League of America #64, somehow knowing all of the Justice Society’s secret identities and insisting he had always been one of them. But when he tries to prove himself by joining them on a mission, he ends up accidentally killing most of them.

Suspecting something is amiss, Red Tornado discovers that he was built by an evil scientist who did indeed build him to defeat not only the Justice Society, but also the Justice League — and that’s it. He never gave Red a real identity or even a face behind the mask. The storyline ends rather sadly with him saying he wants to have those things more than the membership offered by the JSA. (He did end up joining both them and the League eventually.)

Give Them a Team

A significant percentage of Avengers started off as bad guys. It all began when most of the original Avengers decided to take a sabbatical in Avengers #16, leaving Captain America to coach three replacement members with shady pasts: Hawkeye, Scarlet Witch, and Quicksilver.

As you may have noticed, the Avengers did not fall apart due to this decision, and they are in fact going as strong as ever. This may have inspired them to allow other ex-criminals onto the team, including Black Widow, Vision, Sandman, and more. Frankly, if you point at an Avenger at random, there is probably a 50/50 chance that they started out robbing banks or trying to take over the world.

Kill Them (At Their Request)

Indigo, AKA Brainiac 8, was sent from the future to kill Donna Troy, which she succeeded in doing. But afterward, her memory was wiped, leaving behind a gentler, kinder robot lady who ended up joining the new Outsiders with two of Donna’s best friends. Can you say “awkward?”

Indigo nonetheless proved herself a loyal Outsider, right up until her evil Brainiac 8 personality started to reassert itself. Things came to a head in Outsiders #25. Rather than kill anyone else, Indigo begged her lover and teammate, Shift, who can transmute matter, to turn her into a human — killing her in the process.

Diamondback started out as a member of the Serpent Society. After falling in love with Captain America, she ended up not only helping him fight crime, she also dated Steve Rogers for a time.

But things did not go smoothly for the new couple. She continued to have a love-hate relationship with the Serpent Society for years, where they would sometimes try to kill her or convince her to kill others. Even though her relationship with Cap fizzled, she has remained loyal to him, refusing to do him any harm.

Wally West first realized that the Pied Piper wasn’t all that bad when he found him giving free food to a group of poor people. (He didn’t even steal the food.) They started beating up supervillains together and eventually became good friends.

Actually, Wally seemed to make a habit of teaming up with his (and his mentor Barry Allen’s) former foes. On other occasions, he teamed up with the likes of Dr. Alchemy, Captain Cold, and Golden Glider. For all his faults (and there are many), Wally has a “talent for picking friends,” as he himself put it in Flash #53. And isn’t that the kind of compassion you want in a hero?

Can’t get enough #SuperheroProblems? Check out: