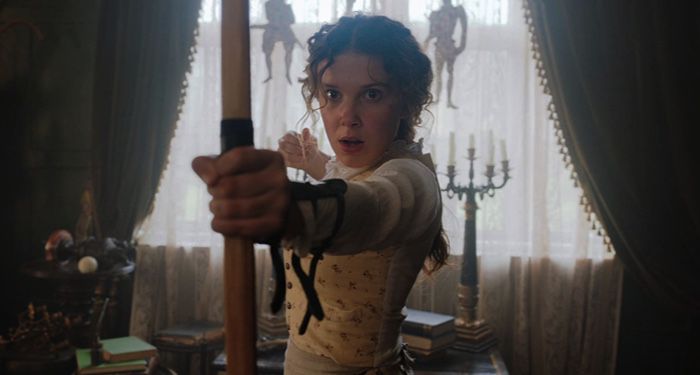 Critical Linking, a daily roundup of the most interesting bookish links from around the web, is sponsored by Nicholas Sparks and his new book, The Return.

“Enola is Sherlock Holmes’s much smarter and more worldly teenage sister. Though her name may be lesser known, she’s been around for more than a decade. The film is based on Nancy Springer’s young adult mystery book series, which puts the intrepid teenage detective smack in the middle of the Holmes boys’ club. If the movie has left you anxious for a sequel, you might want to pick up the books.”

Get to know Enola!

“… I found that for many diaspora writers, success is predicated on a hefty down payment of writing through the white gaze. We’re expected to make our customs, our love, our characters, and our relationships as ‘relatable’ (read: white-adjacent) as possible, even as the United States approaches a demographic shift that will result with nonwhite populations becoming the majority by 2045. I also found that romance novels written by Brown authors are considered culturally specific and ‘traditional.’ Brownness is a cage from which the Brown-skinned woman seeks liberation, while proximity to whiteness is treated as modernity and freedom. To emancipate herself, then, the Brown protagonist rejects her culture to perform some semblance of whiteness. This is unsurprising, given that the billion-dollar romance industry is still whiter than a field of daisies in a blizzard.”

I woooo! and Amen!-ed my way through that entire piece.

“It is tempting and perhaps even warranted for me to lament the significance awarded to the author photo as an unfair, misleading, and superficial distraction from literary purity. But I know such complaints will fall on unsympathetic ears. This is the age of Instagram, a world where the “beauty” of the artist is not a peripheral detail, but a commodity to be optimized, showcased, and marketed just as much—if not more than—the art itself.

Yet as I sat in my apartment experimenting with different poses, trying to emulate the blithe approachability of Ann Patchett or the sagacious wisdom of Jhumpa Lahiri, I couldn’t help but wonder: Who the hell came up with this idea? And why do they hate me?”

If I ever drop a book, just know the taking of an author photo will cause me physical anxiety.