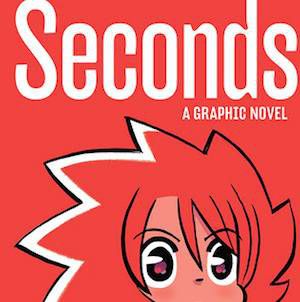 Could Bryan Lee O’Malley’s follow-up to the six-volume Scott Pilgrim series be any more anticipated (she asked in her best Chandler Bing voice)? Seconds, O’Malley’s first stand-alone graphic novel since 2003’s Lost at Sea, drops for realsies on July 15, 2014 in North America, but I have already read it.

And reader, I married it.

First, let me tell you this: Seconds is beautiful. It’s a beautifully designed shiny hardcover with a funky slip jacket. It looks and feel substantial in your hands. All 323 pages of this gorgeous tome are in full colour. It’s the kind of comic you want to put on your shelf just because it’s so damned pretty. When I was anticipating the release of Seconds, I said:

Fans of Scott Pilgrim are eagerly anticipating Seconds, O’Malley’s follow-up comic to be published next year.  I’m hoping that we’ll see a combination of the breadth and scope of Scott Pilgrim with the depth and emotional complexity of Lost at Sea.

And because I’ve been very good this year and Comics Santa loves me, Seconds strikes exactly that balance.

Seconds is the story of Katie, but it is also very much a story about being 29. Katie is feeling very 29 at the beginning of the comic. She has created one successful restaurant, but would like to walk away and start another — but progress on her new venue isn’t going so well and she’s having a hard time extracting herself from her first restaurant. And then there’s work-life balance: Katie doesn’t have any. Her love life isn’t where she wants it to be and she doesn’t have much of a social life, either. She feels trapped by work she once found fulfilling and nervous about the next chapter in her life. She questions her ability to make good decisions and she worries.

Let me put it this way: O’Malley really gets 29-ness.

As in Lost at Sea, the edges of Seconds twinkle with a touch of magical realism. Just as Katie decides she desperately needs a second chance, she gets the chance for one. But only one. A promo card for the comic featured the same instructions that Katie herself comes upon.

The problem is that every time Katie “wakes anew,” she finds a new mistake she wants to fix and a new reason she needs a second chance. And the further and further Katie falls down this magical rabbit hole, the farther and farther she finds herself from who she really is. (See, even without the magic it’s a lot like being 29.) As the comic progresses, Katie become increasingly panicked, increasingly sure she can fix everything with just one more mushroom.

But she pisses off some supernatural things in the process.

Because this is Bryan Lee O’Malley, the story is told with warmth and humour. The art here is typical of O’Malley’s style but without the heavy influence of manga we saw in the page structure of Scott Pilgrim. This isn’t the pop culture fest of Scott Pilgrim, either — though your absolute favourite joke from Scott Pilgrim makes a recurrence here, and it’s wonderful and unexpected and delightful. Instead, this is a comic that shows off O’Malley’s ability to create character and explore emotional depth while still being otherworldly, fun, and weird.

I know you want it. I know you hate me for having read it first. Go pre-order it now at your favourite comics retailer. This is the graphic novel event of 2014, as far as I’m concerned.

I mean, I don’t want to oversell it. Judge for yourself. But.