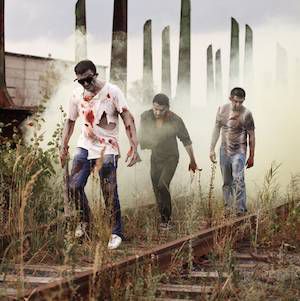 I was watching Game of Thrones when it hit me that the White Walkers’ army is composed of zombies. Okay, they’re technically “wights,” but much like zombies, they’re recently dead, nearly unstoppable, and determined to destroy human lives. That got me thinking: zombies are having not just a pop culture moment, but a decade of dominance.

Zombie stories have a long history, based in African religious traditions as interpreted by slaves in French-ruled Haiti in the 17th and 18th centuries. English language zombie novels are nearly a century old (longer if you count Frankenstein) and you can find them in every decade, but I think right now we’re at peak zombie. Best selling zombie books are too numerous to list, but mega-hits include Patient Zero by Jonathan Maberry, World War Z by Max Brooks, Pride and Prejudice and Zombies by Seth Grahame-Smith, Forest of Hands and Teeth by Carrie Ryan, Feed by Mira Grant, Warm Bodies by Isaac Marion, The Girl With All the Gifts by M. R. Carey, and of course The Walking Dead by Robert Kirkman and Tony Moore, some of which have been or will be adapted to TV or film. Then there’s fiction that has zombie-like creatures, such as the aforementioned A Song of Ice and Fire series or the Inferi in Harry Potter and the Half-Blood Prince. And the surprisingly large number of nonfiction zombie survival guides.

So what’s the deal? Why zombies? Why now? Here are a few theories for your consideration:

The psychoanalytic theory: Vampires can host fancy dinner parties, shop at Barneys, and make sweet savage love to vamp-curious humans. But if you’ve got a zombie in your story, the world probably no longer has things in it like fancy dinners, parties, Barneys, or even many humans. In fiction, the zombie apocalypse is often caused by things we are already nervous about, like nuclear energy, genetic modification, outer space, biological weapons, and pandemics. Or it can symbolize destructive forces themselves: climate change, economic collapse, an overpowering government or military, neo-colonialism, social injustice, and overpopulation. So maybe zombie stories are so attractive right now because they reflect our pessimism about the future.

Then there’s exhaustion with the way we live now. Post-apocalyptic settings are typically devoid of advanced technology, from the internet to flushing toilets. Zombie narratives give us (“us” being a relatively privileged minority) a chance to awake from our technological slumbers, to throw off our servility to the machines, to get back to nature in the most elemental way possible. It’s a kind of reverse fantasy, the kind where we have to work harder, in a more dangerous setting, for a riskier, more distant reward.

Another way of looking at it is that zombies represent us, because we are nothing if not interested in our own fictional reflection. The Dawn of The Dead (1978) is set in a shopping mall for a reason. One character says: “It’s all so bright and neatly wrapped that you don’t see… you don’t see that it can be a prison.” The film reflects director George Romero’s disillusion when the civil rights era of the 1960s became the “me decade” of the 1970s, on its way to the “greed is good” consumerism of the 1980s. Zombies are insatiable, always consuming. They want, but they don’t know why. Sound familiar? And who doesn’t have impulses they’d like to control with their higher, better selves, but sometimes can’t?

To flip it, zombies could represent us as producers, as worker drones, forced to grind away 24/7 for diminishing returns. Our intelligence and free will are defining features of humanity, but zombies are mindless, driven by something they can’t control. Zombies pose the question of how powerless can we be and still be human.

The existential theory: A doctor I know likes to say all human beings are born with a sexually transmitted disease that is 100% fatal. The bell is going to toll for us someday, even if we aren’t sure when, how, or what, if anything, is on the other side. Zombies could be a projection of our implicit knowledge and fear of our own mortality and insignificance. The way zombies in some novels repetitively mimic their old human behaviors or stalk their own homes is a grotesque pantomime of the way we can get lost in minutia and routine, missing the forest for the trees. With their rank, rotting, and badly dressed afterlife, zombies actually make the idea of returning to dust look kind of appealing in comparison.

It’s pop culture’s sweet spot: Maybe zombie stories are being buoyed along by the zeitgeist. At a time when post-apocalyptic stories, action adventure stories, and ultra violence (even gore) are major trends (“dystopia” is on the verge of becoming its own genre) zombies are an obvious source of, erm, fresh narrative meat.

Money, Money, Money: Once a new trend hits (vampires, I’m looking at you), everyone wants to cash in. I’m not saying authors are writing zombies purely for money (not that there’s anything wrong with that), but maybe publishing is more interested in looking at zombie stories now that they know they sell. I’m not sure if zombies are a category killer like vampires were, but they are certainly versatile: you can find zombies in YA, fantasy, sci-fi, horror, romance, lit fic, classics, poetry, and, most improbably, self-help. The more zombie stories are available, the more readers are aware of them, and the more they sell. Until… they don’t any more (vampires, I’m still looking at you).

The literary appeal: Zombie novels have a lot going for them, plot and character wise. There’s often a small group of human survivors who, quicker than you can say “Graaaaaaaagh,” become allies, enemies, friends, or lovers. The protagonists are usually on the move, and there’s a ton of suspense in wondering what’s next. There are unfurled intestines and kaleidescopically spattered brain matter, always good for a laugh. (Kidding!) And these books are full of moral questions. Zombies aren’t like other antagonists because they’re not intentionally evil (compare terrorists and serial killers). But they can’t be reasoned with or bargained with. How do you deal with a threat like that? What or who can you sacrifice to save yourself, your loved ones, or your hastily formed little group? At what point in single-mindedly killing things for your own survival do you become what you hate?

I especially love the zombie novels with zombies who aren’t mindless, who have both human and inhuman traits. They force readers to ask what makes a human being a person, or at least what makes a living thing worthy of moral consideration. Is it having a certain biological or genetic makeup? Self-consciousness or intelligence? Or is it the ability to empathize, to form bonds, to love and be loved, to act selflessly?

I’m not sure why zombies have shambled their way to the front of the pop culture. What do you think?