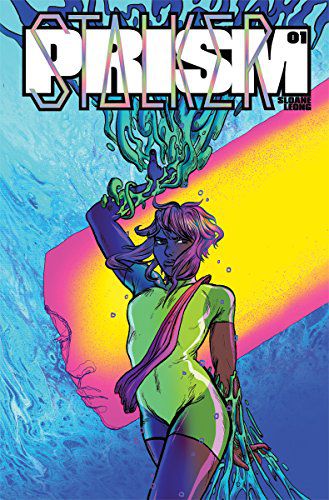 Aliens forcibly recruit a colony prodigy for an elite school. This school teaches its students to conquer planets for exploitation. Young Vep would rather stay with her family, but her teachers offer no alternative. Her family lives in a colony where they work was indentured servants. Vep briefly hopes if she succeeds in school, she can return. To survive, Vep has to learn how to fight, change her perception on reality, and persist. This is Prism Stalker by Sloane Leong, a beautiful sci-fi adventure. Vep’s colorful misadventures tackle colonialism, identity and agency in a monthly serial.

We are happy to have Sloane Leong with us on Book Riot. Her other comic credits include A Hollowing and A Body Made of Seeing. Future projects include A Map to the Sun.

Prism Stalker explores colonialism on a galactic and interspecies scale. It takes a different angle from most works on colonialism, by focusing on an oppressed character who is selected to help her oppressors. What inspired you take this approach?

A lot of different things are colliding in this project for me. As someone who comes from native ancestries AND colonialist ancestries, I’ve always felt a lot of conflict with the cultures I was raised in and bitterness over the indifference towards native peoples rights to their homelands. I also felt a big disconnect to some of my cultures growing up because of displacement, the false notion of blood quantum and the general atmosphere of ubiquitous racism fragmented down to minute scales. Especially in Hawaii, where I grew up as a teen, those elements were always very present and tourism really drove home how other and lesser native peoples seemed to visitors. Prism is me filtering all these feelings and experiences into a loud, sci-fi kaleidoscope.

Online communities have brought up that creating fantastic allegories for racism and colonialism runs the risk of erasing real POC, but you managed to sidestep that issue beautifully with Vep. How do you think other comic artists and writers can follow that example?

I’m not sure! This is a very personal story to me so I couldn’t help but make Vep someone like me and other girls I know.

Each planet and landscape has a unique personality, with the academy having constantly changing rooms. What were your sources of inspiration and references?

I feel like sci-fi has had a dominant aesthetic for so long—clean, white, angular—which reflects a sort of Anglo/Western ideal. I wanted to embrace my cultures visually in these alien landscapes and pieces of architecture: warm, neons of flowers, forests, and fish in Hawaii and the bright vivid colors of Mexican folk art. I’m also really fascinated with biology and I think the potential of organic components on a grander scale is overlooked a lot in the genre.

It’s fascinating that Vep is forcibly recruited to join a military academy and learn to fight, only succeeding when she believes she has agency. What thoughts on agency, choice and consent were you hoping to convey?

There’s a lot of deception and grooming around the student’s ideas of agency, morality, and ethics in Vep’s academy that will get explored more as the series unfolds. One point of inspiration for me is how capitalist culture right now is intersecting with technology and how we form identities and perform these personas across these platforms. There’s a lack of control over the context of how we develop as people, how we shape our goals and desires and this reflects greatly in Vep’s academy, where they’re being molded in multiple, subtle, insidious ways to pursue and fulfill the goals of those in power, and not their own despite thinking so.

Related to number 4, how much agency does Vep have, and does it change throughout the story?

It’s definitely going to change as the story moves forward. There will be cruel realizations and denial and then, maybe, some form of freedom and choice presented to her. But all of her choices are in a vise-like grip of dire consequences so I can’t say how much agency that really gives her.

The coloring is highly fascinating and reminds one of a kaleidoscope impressed onto a flat page. What tools do you like to use for drawing, inking and coloring?

I use a brush and dip pen with sumi ink on bristol, scan it in and then color in Clip Studio Paint! I’m obsessed with bold, bright colors as you noted. I’m always experimenting with how visual loudness or dull constrained palettes change the tone of a scene.

Your previous works include The Hollowing, a horror comic about guilt and grief, and A Body Made of Seeing, an autobiographical collection. How was working on Prism Stalker different?

I love working on short stories and comics but Prism will be my first really longform work of my career. The thematic punch and efficiency that short comics can deliver are always fun to create but being able to go in and spend time with a cast of characters for a longer time, getting to know them intimately, and orchestrating a story and picking away at its themes have been very exciting for me.

What upcoming works can you tell us about, like A Map to the Sun?

A Map to the Sun is a slice-of-life girls basketball drama which follows five ragtag 10th grade girls and how they make friends, enemies and grow as a group. I’ve been working on it simultaneously with Prism Stalker which has been intense but it’s nice to have projects to bounce back and forth between that have different visual goals. It’s inspired by sports manga, a genre that American comics have barely used until recently (many helmed by other women cartoonists!). It’s slated for release in Spring of 2019.