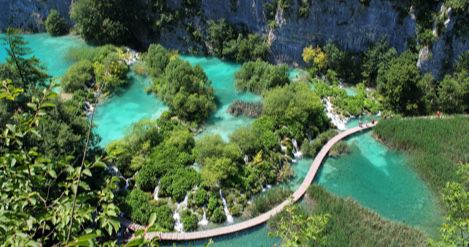 This list of Slavic SFF in translation for World of Fantasy Day is sponsored by Kingdom of Copper by S.A. Chakraborty.

This is probably on of the most interesting and frustrating lists I’ve ever worked on. Which, in a way, makes it all the more satisfying to share with you! Yet the fact remains that my list of Slavic SFF books I want to read is still considerably larger than the list of books currently available in translation. Because there are so many amazing Slavic-language SFF titles that I came across while researching this piece that I wish I could share with you! But which have not yet been, and may never be, translated.

It is also worth pointing out that, to my disappointment, the list below is white. Very white. And you might be thinking: well, duh, Jessica. You chose to write a list about Slavic SFF Fiction, what did you think would happen. But I was honestly hoping that I’d find a few authors of color to promote, since there are many people of color living in Slavic language–speaking countries, and I’m sure there are some really talented SFF authors among them.

If you’re reading this, and you have some suggestions for Slavic-language SFF authors of color, please please tweet them to me at @Jthebookworm! Because I’d love to keep an eye on their careers, and a hopeful eye out for future translations!

This list is also a little more male than I wanted, so if you also know of any women authors I missed go ahead and tweet those at me as well! 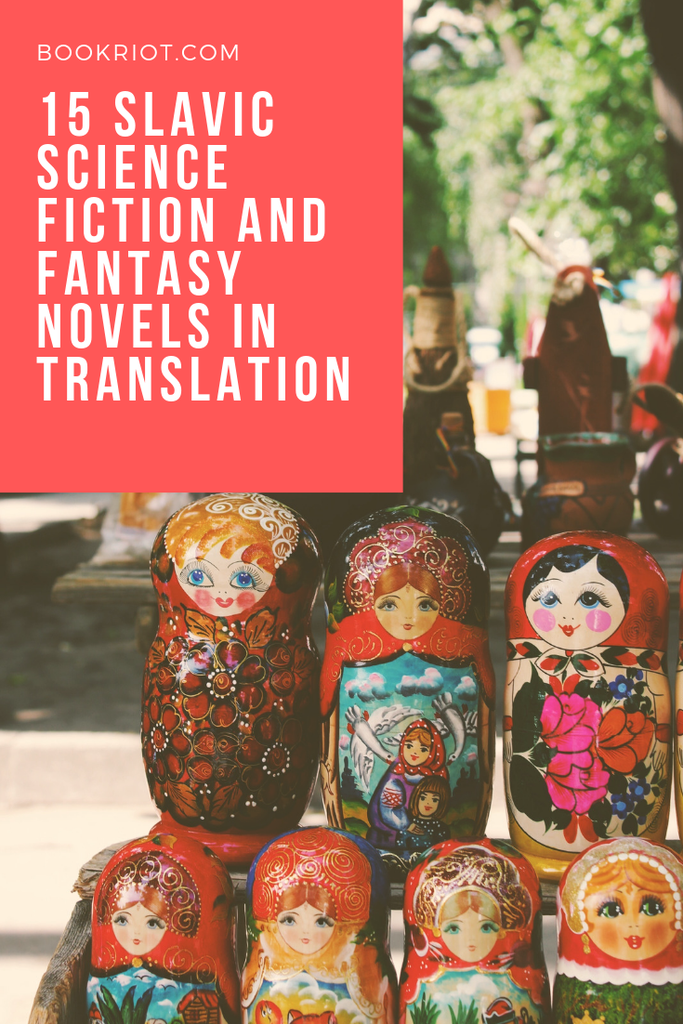 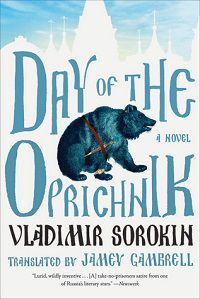 Day of the Oprichnik by Vladimir Sorokin

Maybe I’m bending the definition of SFF a little bit here – and maybe I’m not, we all know that the idea of SFF, in particular science fiction, can be subjective at times – but Sorokin’s disturbing, high-tech Russia of 2028 is too intriguing to leave off this list. Highly praised, and described as a “startling, relentless portrait of a troubled and troubling empire” and a “richly imagined vision of the future and a razor-sharp diagnosis of a country in crisis,” Day of the Oprichnik is the story of Andrei Danilovich Komiaga, oprichnik, trusted courtier of the czar, and one of the most feared men in all of Russia.

Russia, 2033, and those still alive in post-apocalyptic Moscow survive underground ever since a devastating event decimated the earth above. Outside the various bunkers that now house a whole generation of people born underground in repurposed metro stations, the surface is covered in poison and populated by terrifying mutants. Artyom, who has never ventured outside of his home station, suddenly finds himself on a perilous journey into the heart of the Metro system to warn the survivors about a new and devastating danger. If any of that plot sounds familiar to you, it might be because the Metro 2033 series has been transformed into an excellent series of sci-fi/horror, first-person shooter video games! There’s even a shiny new installment, Metro Exodus, coming out next month (February 15), and I am stoked. 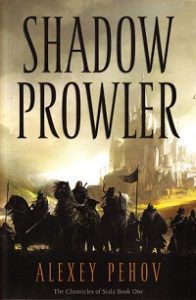 There was surprisingly (and disappointingly) little epic fantasy to find when making this list. I have my sad face on, because I love epic fantasy, but what I did find as so promising. Touted as being reminiscent of Moorcock’s dark fantasy Elric series, Shadow Prowler, the first in The Chronicles of Siala, is the story of master thief Shadow Harold, who is apparently the only one who can save his city of Avendoom from the monstrous army of the Nameless One.

I encountered a lot of praise for the Strugatsky brothers while researching this post, so I’m eager to get my hands on Monday Begins on Saturday, which is reputed to be their most popular novel. Computer Programmer Sasha is driving through the forests of Northwest Russia when he picks up two hitchhikers from the National Institute for the Technology of Witchcraft and Thaumaturgy (NITWiT). NITWit is a “largely dysfunctional institute” full of magical creatures and devices, from talking cats to magical sofas. Not to mention a preponderance of wizards, vampires, and petty bureaucrats. What’s not to love? This is an older novel, around since 1964, and is supposed to be absolutely hilarious. Sign me up. 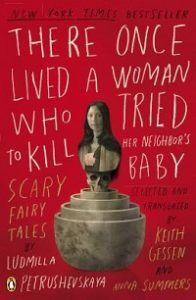 I’m cheating a little with this one, because it’s not actually a novel. There Once Lived a Woman is one of Petrushevskaya’s extremely well-received collections of short stories. But it really is too good to be left off for a technicality of form! Petrusheskaya has a unique, beautiful but disturbing turn of phrase, and she spins these scary fairytales with real skill. Though not retellings of older tales, Petrushevskaya’s original stories nevertheless possess the straightforward yet fantastical feel of a traditional fairy tale, and the darkness that only increases as you progress through the book will linger in the back of your mind for days.

Aside from Andrzej Sapkowski’s Witcher series novels, Lykyanenko’s Night Watch novels are probably the best known series on this list. Even those who haven’t read the books may have seen or at least heard of the two movie adaptations the series inspired (Night Watch and Day Watch, after the first two novels of the series). Anton Gorodetsky is a mid-level light magician with the Night Watch. His job is to defend the uneasy peace between the forces of light and dark, between which every “Other” – vampire, magician, shape-shifter, healer – must choose. One night he comes across a powerful young other who is sworn to neither side, and finds himself in a precarious position with the tenuous balance of the world in his hands. 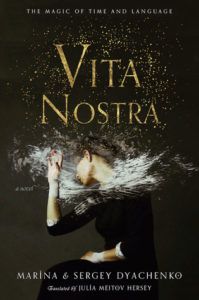 Can I just have a little moment of appreciation for how beautiful this books is? Just killing me with that black and gold that seems to be everywhere this year. So gorgeous. If I recall correctly, Vita Nostra is the most recent title on this list in terms of translation, having just been released this past November (2018), and has already generated considerable buzz! A dark, psychological fantasy novel, Vita Nostra tells the story of Sasha Samokhina who has been chosen to attend the Institute of Special Technologies. A sinister school, IST holds its students hostage by means of fear and threats. But the benefits of this strange education, at least for those who toe the line, are beyond measure.

The Land of Stone Flowers by Sveta Dorosheva

In a charming inversion of most fairytale collections, Dorosheva’s The Land of Stone Flowers is a collections of illustrated stories told by the fair folk about the strange, inconceivable ways of the human world. The result is more than a little absurd and yet provides a look at the often nonsensical habits of human behavior from an unusual perspective. With the result that, while being enchanted by Dorosheva’s storytelling ability, the reader also finds remarkable insights about their own world between the pages of this unique volume. 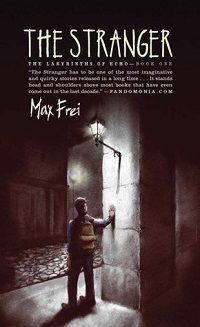 A dark, comic, winding book, The Stranger is the first in Max Frei’s Labyrinths of Echos series, featuring Max Frei himself as the dream wandering hero. Frei is a pen name for Svetlana Yuryevna Martynchik, but the use of “Max Frei” as both character and author plays beautifully into the novel’s complex journey through winding alternate worlds. By day Max is unremarkable, to say the least. But in his dreams he reaches into a magical parallel world where he is a renowned member of an order whose job it is to solve cases “more extravagant and unreal than one could imagine”.

This unique science fiction novel actually began as a series of Facebook posts from an alternative reality, and is written entirely in blocks of 100 words. Set in Ukraine after a war with Russia, the novel follows the story of a man who has lost his memory because his brain had been co-opted by the Russian military to control satellites. He wakes up in a hospital, without his memory, and sets out on a journey to discover his past. 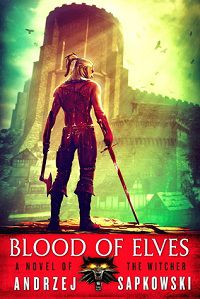 Blood of Elves by Andrzej Sapkowki

Does this book even need an introduction at this point? I almost left it off just because it’s so well known but, as I pointed out earlier, there is so little slavic epic fantasy in translation to work with. And the Witcher series is nothing if not epic. Technically readers are recommended to start their read of Polish author Sapkowski’s Witcher series with The Last Wish, a collection of short stories in which the character of the Witcher, Geralt of Rivia, was first introduced. So if you jump straight into Blood of Elves you might feel like you’re missing something. But, then again, if you’re acquainted with the popular video game series that originally introduced so many to Geralt, you should feel right at home!

The Night Club by Jiří Kulhánek

Set in Prague, Czech author Jiří Kulhánek’s novel follows a shadowy group of vigilantes known as the Night Club. The Night Club exists to protect the city and its people from criminals, and Tobias has lived with them even since he was a child. But when the club is decimated one night by an unforeseen event, Tobias finds himself left for dead. But not dead. Instead he’s been reborn as a vampire, and finds himself on a wild journey halfway across the world as he struggles to return to Prague and his life’s work with the Night Club. 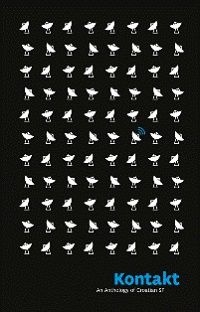 Breaking the rules again a bit with this one, since like Petrushevskaya’s book this is not technically a novel. But what it is is a collection of 12 short stories from Croatian SFF writers, a group seriously underrepresented among the pile of novels I pulled down for this list. It was originally produced in conjunction with the 2012 European Science Fiction Convention (Eurocon) and has now been translated in English and made available for sale in order to introduce new readers to the talented world of Croatian science fiction and fantasy.

Kosingas: Order of the Dragon is the first novel in Serbian author Alecksandar Tesic’s fantasy series, first published in 2008. The trilogy was very successful within the Serbian market, and has been published in both former Yugoslavia and Poland. It was independently translated and published in English in 2015, though unfortunately the other two parts of the trilogy have not. Set in the 14th century, a mythic order of knights prepares for a final battle with the powers of Hades, even as behind the scenes an invisible, silent war rages between the old Slavic faith and the encroachment of the new Christianity. 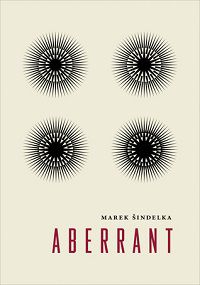 Set in a flood-ravaged post-apocalyptic Prague, Czech author Marek Šindelka’s novel of ecological revenge is sure to appeal to fans of Jeff Vandermeer’s Southern Reach trilogy. In the world of Aberrant, nature has run amok, and those humans not being taken out by surreal animal-plant symbionts are possessed by some spirit of unknown origin. Aberrant follows the story of three childhood friends and is as much about the relationships between people as it is about the equally tenuous relationship between people and their environment.