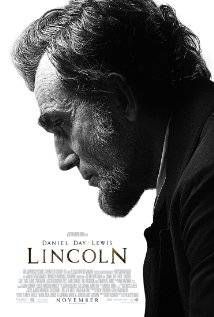 I read Team of Rivals the first Christmas I worked at a bookstore. The title came out in fall of 2006, and the way it sold that holiday season, it seemed like everyone had asked Santa for a copy of Doris Kearns Goodwin’s non-fiction account of Lincoln and three of the men he selected for his presidential cabinet (ALL of whom were his opponents for the Republican presidential nomination, hence the TEAM being composed of RIVALS).

It’s a BEHEMOTH of a book. Team of Rivals comes in at 944 pages. See! Behemoth! I’m usually not okay with a book being that long unless it is (says under breath) Harry Potter. But I thoroughly enjoyed the long hike through these pages. Team of Rivals was a fascinating and deeply human read. I wish just ONE of my high school AP history classes (or college courses, for that matter) had been as entertaining and enlightening.

So I was looking forward to two and a half hours of Lincoln, the Stephen Spielberg-directed, Tony Kushner-scribed, Daniel Day-Lewis-starring adaptation of Team of Rivals. And I’m usually not okay with a movie being that long unless it’s… no I’m never okay with a movie being that long. But there was that A-list Hollywood pedigree. And it had a 91 on Rotten Tomatoes. And it was based on a really smart and thoughtful book I so immensely enjoyed. So I went in open-minded-borderline-excited.

The movie eschews focusing on Lincoln’s relationships with his “Team of Rivals” (which was, of course, the book’s engine) in favor of focusing on Lincoln trying to get an amendment passed to abolish slavery. Which, in theory, is the less interesting move. Instead of putting your weight behind character relationships, you’re putting your weight behind philosophy. You’re risking replacing dramatic tension with a bunch of waxing philosophic. Let me put that another way. You’re risking replacing interesting with boring.

So in theory, it’s the less interesting move. In practice, it was the LEAST interesting move. If you love watching characters in period garb talk a lot in shadowy quarters for about two and a half hours, this is the film for you. Every once in a while we get into Congress and every once in a LONG while we get out into sunlight. But it’s mostly dark shadows, top hats, and talking.

For the life of me, I cannot figure out how such an all-star Hollywood team took such fascinating and complex source material and sucked ALL the blood out of it. Film adaptation vampires! So much scarier than Stoker and Rice vampires! The film barely explores Lincoln’s relationship with his cabinet. His primary relationships are dealing with Mary Todd Lincoln being a crying crazy and Robert Lincoln being a rebellious young lad wanting to fight in the Civil War even though he keeps seeing everyone who’s fighting for the Union die/lose both their legs. Yes, it’s dealing with an important issue, a critical piece of our country’s history, the abolition of slavery. But an issue does not a story make. I don’t know what to say to the 91% of critics who liked this film (and a not insignificant number of people who have posted positively about this film on my Facebook feed), I found this film dull and ponderous, self-important and self-indulgent, and I think it did a great disservice to its source material.

I said it in the subject of this post. I’ll say it again here. Skip Lincoln. Read Team of Rivals.

But what do you guys think? Who’s read the book/seen the film? How doest this all shake down with you?