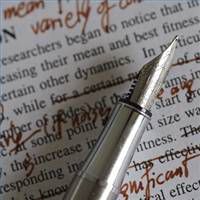 There’s more advice out there on how to become a good writer than there are writers themselves. Is that a good way to start a post, or is dealing in fantastical hyperbole lazier than only wearing Velcro shoes? Should you write at the same time each day? Should you lose sleep over microscopic grammar problems? The website Red Pen of Doom responds with a resounding: fuggedaboutit! Centered around the idea that good writing comes from structure, editing, and an actual awareness of your audience, it gives playful examples of what to do and what not to do, with a lot of fun non-writing stuff thrown in just for kicks.

One of my favorite posts is a sort of edit/critique of the first page of Ayn Rand’s The Fountainhead. It doesn’t really matter where you stand politically, this site takes Rand to task for being just a plain horrible writer. The tone is spot on, it’s hilarious, and there are often posts of good music because…well, because why not?

Here’s a selection of what the site has to offer,  from a list of seven movie cliches that deserve to be abolished:

7) Romantic comedies starring Matthew McConaughey
We get it: he’s cute, and his Texas drawl is charming

HOWEVER: He is not required, by federal law, to be in every romantic comedy on the planet.

Book Deals Newsletter
Sign up for our Book Deals newsletter and get up to 80% off books you actually want to read.
Thank you for signing up! Keep an eye on your inbox.
By signing up you agree to our terms of use
…..
4) False alarms in Every Horror Movie Known to Man
Enough with the cat / boyfriend / little brother nonsense, and the scary music is just cheating.
…..
1) Romantic comedies starring Matthew McConaughey AND Kate Hudson