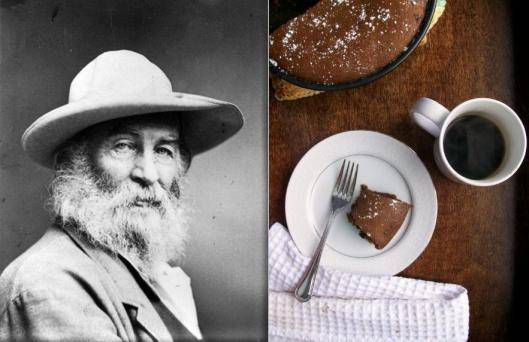 Many of the sites we highlight in this feature have been around for a while–there’s nothing wrong with the tried and true. However, sometimes we find a relatively new operation that earns it stripes less through amassed content than through amazing concept. Such is the lovely, evocative, and surprisingly user-friendly Paper and Salt, a blog that “ attempts to recreate and reinterpret the dishes that iconic authors discuss in their letters, diaries, essays, and fiction.”

What do I mean by those modifiers? Well, the WordPress-built site itself is lovely: a simple black-and-white design. Its nostalgic notes and photos are evocative. So what’s “user friendly” about this place for one well-read foodie to share her ruminations on famous authors and meals? The recipes! These aren’t precious transliterations from Balzac’s grand-mère’s kitchen; they’re modern interpretations of foods that famous authors (including the aforesaid Honoré de Balzac, Charles Dickens, Sylvia Plath, and William Faulkner) either mentioned in their work, mentioned eating themselves (in journals and diaries), or would have eaten, given their era and culture. Even if the recipes themselves are sometimes a bit old-fashioned (very few home cooks make chicken consommé these days), blogger Nicole uses modern sources like Saveur magazine and the blog Smitten Kitchen to provide clear measurements and easy instructions.

But really, who cares about the recipes? Because the best part of Paper and Salt is the commentary from Nicole. As she describes Walt Whitman’s tastes, she writes:

In a letter from 1877, he wrote, “I was foolish enough to take a good strong drink, & eat a couple of slices of rich cake late at night – & I shan’t do any thing of the kind again.” Yeah, I’ve heard that one before. It’s what I tell myself before checking to see if the ice cream place down the street delivers (the beauty of New York is that it does).

This is a blog with fewer-than-usual posts (Nicole started blogging in January, and seems to be updating 2-3 times a month right now) but higher-than-usual enjoyment factor for English majors who know their way around a kitchen as well as they do a Norton Anthology.