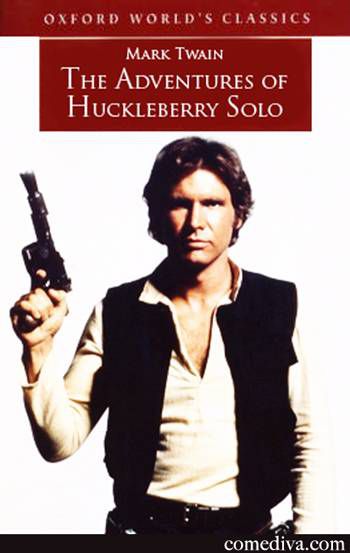 I’m a geek. I’m more certain of that fact every day. And my geekiness is not restricted just to the realm of books. If it were, I might not have appreciated the gems of geeky book love that I found at Comediva. The folks there pay homage to their geeky pop culture obsessions in a variety of ways.  It’s not all book-related, but they are clearly a number of book-fiends among them. Here’s a look at a few of my favorite posts:

Luis Navarro and Emily Macgregor may have had a little too much fun reimagining literary classics had they taken place in a galaxy far, far away. Titles include A Portrait of the Dark Lord As a Young Man, The Bell Jar Jar, One Thousand Years of Digestion, and To Kill a Clone Trooper.  And, of course, this one from Mark Twain (who I firmly believe would have loved Star Wars!):

A scoundrel and trouble-maker at heart, young Huckleberry Solo finds himself living the good life after being taken in by the Widow Calrissian.  However, when his ne’er-do-well father breezes into town and kidnaps him to get his smuggler’s booty, Solo goes on the run and teams up with a runaway slave named Chewbacca.  The unlikely pair head down the Mississippi on a raft they christen the Dixie Falcon.  After several adventures and a close call with a band of Mandos, they run into an odd pair of confidence men, the devious Frenchman, Artie Detou and the hare-brained Brit, “Duke” Threepeo, who betray them to the authorities.  With Chewie back in shackles, Huckleberry Solo ends up at Uncle Owen and Aunt Beru’s place to plan a rescue with his best friend, Luke Sawyer.  After freeing the Wookie, Huckleberry heads out West for grand adventures in the Outer Rim!

It started out, it would seem, as a series of memes created from stills from the movie, paired with lame (in the way that all pick-up lines are lame) wordplay from the Potter-verse. They were amusing, sure, but when coming from a somewhat older, slightly intoxicated Hermione, out for a night of speed dating, they are…well, see for yourself.

I guess things didn’t work out with Ron after all.

Teen Movies Based on Unlikely Literature

Kristen Bobst was inspired by Hollywood’s uh..success?…in converting the basic plots in classic literature into teen films. Remember Heath Ledger in Ten Things I Hate About You? She dug deep into the literary canon and found a few books that probably wouldn’t, but theoretically could, receive the same treatment.

Emma breaks up with controlling boyfriend Charles just one week before prom. Everyone at the Bovary School was certain that Emma would be prom queen! But can a girl be a queen without a king? Emma decides to date one fella a day until the weekend before prom to decide who she will take. Could it be Rodolphe, the school’s rich kid? Or Mock U.N. Club President Leon? Maybe Lheureux, the sullen emo dude? Will Charles win Emma back despite her new suitors? Will Emma realize it’s OK to go to prom alone, or will she spike the punch bowl with arsenic?

And, Finally….Casual Vacancy for Potterheads

They’ve even come up with a guide to help those who love Potter and are having trouble adjusting to the idea that J.K. Rowling has moved into another realm with her writing. Tips include: “Understand that Barry Fairbrother is Albus Dumbledore’s second cousin” and “Cross out swearwords and write in spells. Pronounce them appropriately.”  I haven’t read the book yet, so I don’t know if these tips will work for those who need to find a way to bridge the two worlds, but I did notice the Potter-esque sound of Pagford.