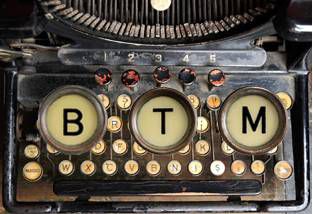 Since Boston’s Grub Street writers’ collective is holding its annual Muse conference this weekend, it seems only fitting for us to recognize a site we like very, very much indeed that was founded by some Grub Street members. Beyond the Margins is a collective blog or, as they founders say in their About Us intro, “a literary magazine run amok.” (Full Disclosure: It has also featured yours truly once.)

Beyondd the Margins (also known as @BTMargins on Twitter) is a group of active writers, some of whom are famous, others of whom are just getting started in their writing careers. What we like about this site in particular is its collaborative and equitable vibe. Everyone’s posts look the same and get the same promotion because these folks really get the fact that as writers, we work alone but need some kind of community–especially the kind of community that doesn’t rate and rank and judge. (We do enough of that in our own heads!)

There is plenty of communal advice about writing to be found on this site, and we love the drop-down menu that allows visitors to quickly access pages like “1st Draft” and “Voice.” You never know what you’ll find: An author interview, a craft post, a personal essay that makes you say “Yes! THAT!” as you toil away in front of your own blank page. There are also meaty sections about the business of writing, including posts about agents, editors, writing workshops, manuscript formatting, and (“Yes! THAT!”) social media. Beyond the Margins is like a small, finely honed combination of Writer’s Digest and Poets & Writers (and right now, at least, it requires no subscription fee).

However, what keeps us coming back to Beyond the Margins is the strength of its individual voices, especially when they’re writing humor and/or opinion pieces. That’s not simply because the writing is good–although it is. It’s because these writers are not phoning it in. They’re out there making their living from their words, some to a greater and some to a lesser extent, but all trying to make sense of today’s literary world and the publishing marketplace.

Thus, the site’s newest feature may be the perfect one to highlight as the Muse Conference goes on: Novelist Laura Zigman’s “As The Writer Turns,” which features Zigman’s already popular videos. The first episode? “But Can You Monetize It?” Words that may strike fear in every writer’s heart–but Zigman provides some laughs along the way.