In the 1950s, common nightmares featured atomic war. Today, kids grow up with the routine horrors of climate change ruining their tomorrows. There’s a distinct difference between my childhood and now – inevitability. Atomic holocausts were not certain for us, but aren’t rising seas, mass extinctions, extreme weather, drastic environmental changes, and a billion refugees sure things for anyone who will live to see the 22nd century? 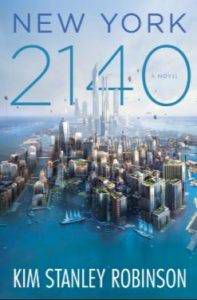 Isn’t it science fiction’s job to scare us away from that future? The science, which isn’t science fiction, is quite clear – we’re heading towards a very scary future. We could avoid that nightmare if we’re willing to change how we live now. Well, that last sentence might be dated. It could be too late. Kim Stanley Robinson’s new novel, New York 2140 makes me wonder if science fiction is starting to give up. Robinson shows life in the Big Apple after the seas have risen fifty feet. Despite all the destruction climate change brings planet Earth, humans still thrive. Life isn’t that different from now, not in the essential ways.

Even as Republicans work to bring climate change denial to all three branches of our government, I’m wondering if climate change believers aren’t given up on reversing the concentration of CO2 in the atmosphere. Is Kim Stanley Robinson taking a new realistic approach to climate change acceptance?

Science fiction cannot predict the future – the future isn’t predictable. But the future sure as hell can be discussed. Has Robinson’s new novel changed the discussion? If we ignore all the people who deny climate change because they can’t give up their religion of cutting taxes, shrinking the government, removing regulations and study the conversations of those who accept the overwhelming science on climate change – has the discussion moved from avoidance to adaptation?

I’m a big fan of Kim Stanley Robinson, and I really admire New York 2140, but it worries me. Nineteen Eighty-Four and The Handmaid’s Tale worried me too, but aren’t they different? Those were guidebooks for futures we want to avoid. New York 2140 feels like a place I’d like to live if I had the money. Robinson has the optimism we will survive. Even survive in style. If you read between the plotlines there’s plenty of nightmares to fear; yet, life goes on. There are winners and losers. And hasn’t that always been so?

New York 2140 will be a much talked about novel. It reminds me of Stand on Zanzibar by John Brunner, a 1968 novel that imagined the year 2010. Both books have a large cast of character, fascinating info dumps, and realistic extrapolations. The insane irony of science fiction is its always about the present even though we assume it’s about the future.

Robinson’s story is surprisingly contemporary. It’s about folks like us play-acting in a world where the oceans are fifty feet higher. We can’t really know what that world will be like, but it’s psychologically comforting to feel we’ll survive. I just don’t know if that’s the best message to send right now. Are we ready to accept a radically altered Earth as our future?

Shouldn’t science fiction be scaring the hell out of us over global warming? Cli-Fi (climate fiction) is a sub-genre of science fiction that’s been around a while that’s growing in popularity. Writers and readers need to start studying the subtle intent of these stories and decide if attitudes have shifted. Have we given up? Are we heading towards an inevitable future? This is a goldmine for writers exploring human nature. Are we capable of controlling our fate with the brainpower we prize so highly? Or, are we deluded leafs blowing in the wind?

Which is scarier? A future where the Earth is radically different. Or a now where humans don’t have what it takes to avoid that future. Maybe it’s time for science fiction to get a whole lot scarier.