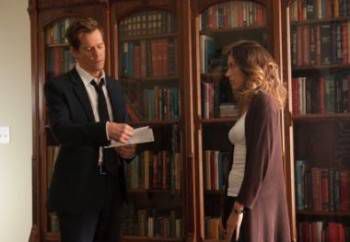 This Sunday, when most people were busy making snacks for the Super Bowl, I sat down to spend some quality time with my DVR. I discovered that it had recorded the first two episodes of a show starring Kevin Bacon, called The Following. I looked it up and found that it is a show with strong ties to the world of literature, specifically to the works of Edgar Allan Poe.  I thought that maybe I’d been under a rock the last couple of weeks. How could I have missed the Poe connection? But I don’t think they played it up. I think that they want the show to be a crime show. They are banking on Bacon to pull in viewers. Putting a Poe connection front and center didn’t do much for The Raven, after all.

Here’s the premise: Kevin Bacon plays a retired FBI agent/writer. He caught, single-handedly, a maniacal serial killer who had murdered 14 college co-eds, stabbing them repeatedly and removing their eyes. This killer, played by James Purefoy, is a literature professor at that university, and he is an expert in the works of Edgar Allan Poe. On the eve of his execution, the killer escapes. He has unfinished work.  Bacon’s character, Ryan Hardy, is pulled out of retirement to consult. They soon discover that Joe Carroll, the killer, had cultivated a network of followers during the time he spent in jail, and they are ready to continue on with his life’s work. Carroll is apprehended in the first episode, but he continues to manipulate the people and events outside the prison walls.

That first episode is pretty fascinating. It’s clear that they’ve done their Poe research, but I like how they don’t overdo the connection. It’s not about Poe or the macabre nature of his stories. It’s about the relationship between Carroll and Hardy. Carroll describes the whole endeavor as his second novel. He’s “writing” a story that has more commercial appeal than his first novel, which, until his arrest, was a commercial failure.  He sees each death (and there are many), as a chapter in his book.  He has them plotted out, and he has members of his following in place to see that they are carried out. He intends to stick around until the end, to see that it all goes according to plan.

Episode 2, “Chapter 2,” focuses on finding the prison guard who helped Carroll escape. They know he is one of the following, and they hope to stop him before he kills. This episode focuses more closely on Carroll’s ex-wife and her relationship with Hardy. They also do more to reveal how people are not who they seem to be, like the nanny for Carroll’s son, Joey. Things get complicated quickly, but Hardy also manages to surprise Carroll, demonstrating that he is not as in control as he thought he was. That was a nice twist, and it kinda saved the episode for me.

The third episode, “The Poet’s Fire,” leads the FBI to a fifth member of the following, one who commits a very public murder while dressed as Poe. This follower is focused on exacting revenge on those people who were responsible for Carroll’s failures – the critic that panned his book, the dean who denied him tender, and Hardy, the agent who ended his killing streak. Before the episode is over, the number of known followers will change.

The ratings have started strong, but the reaction from the critics has been mixed. There was some concern about the level of violence in the show. It’s not suggested, as in so many other shows. It’s right there, and it lasts as long as it needs to. Poe’s characters tended to be direct, matter-of-fact about the violence they committed. The characters that Carroll has created for his novel take their time. They enjoy what they do.  I like that Poe is used as a thread that holds everything together, without letting him and his world overtake the fairly inventive storyline they have created.

Should you be watching The Following? I’m still not sure about the long term, but I definitely think that it’s worth checking out. It’s surprising, and that’s a good thing.