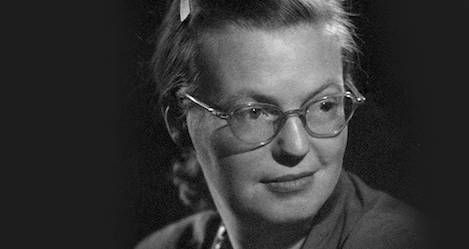 Shirley Jackson’s 101st birthday is this month. She is a premier writer of “psychological suspense, horror, and the dark fantastic”(1). So now seems like a good time to remind readers that, between writing beloved and bone-chilling books, Shirley Jackson also wrote about the life of a wife and mother in the mid-20th century.

Jackson published her essays on family life in women’s magazines such as Good Housekeeping and Woman’s Home Companion. In the ’50s, they were collected in two memoirs(2): Life Among the Savages (1953) and Raising Demons (1957). These two books recount amusing anecdotes from the lives of Jackson, her husband Stanley Hyman, and their four children: Laurie, Jannie, Sally, and Barry. Yes, the writer known for such creepy and macabre tales as “The Lottery” and The Haunting of Hill House also wrote charming accounts of her family’s hijinks and foibles. 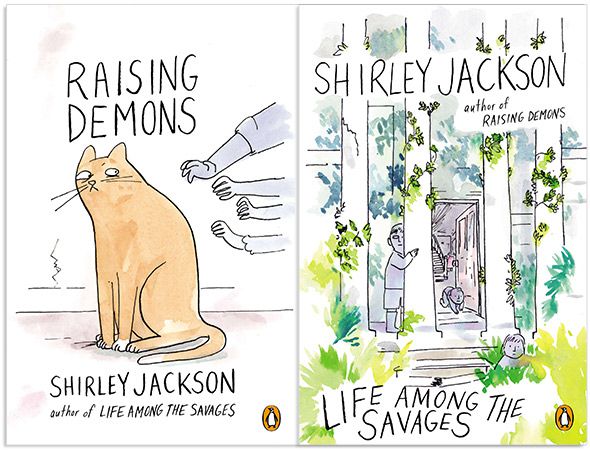 For those of you unfamiliar with Jackson’s work, her usual subjects include haunted houses, apocalyptic scenarios, unexplained happenings, etc. You know, the stuff that makes you scared to walk down a dark hall. Some writers employ blood, gore, and monsters to scare the wits out of you. Jackson’s horror is more subtle, even mundane. It is often cemented in a real world, but one gone slightly off-kilter. The Haunting of Hill House, one of my favorite novels, is about a house that may not even be haunted. The ghost never appears, is never made explicit; all occurrences could be blamed on the main character, an anxious woman named Eleanor. That’s the thrill of Jackson’s work: the monster is in your head, and scarier than words can describe.

So at first glance, Jackson’s family stories appear to be a complete departure from her usual style. They deal with the mundane issues of daily living—picky eaters, car repairs, and bank visits. While undeniably amusing, they seem lighthearted, even trivial. Many early critics were disappointed that the author of the disturbing novel Hangsaman had penned “inconsequential” stories of motherhood and managing house. “It is something of a shock,” one wrote, “to read such ephemeral fluff.” (3)

But really, the books are classic Shirley Jackson. Each story displays the signature humor she lends to all her writing. Sometimes it is a dark, creeping humor—funny, but unsettling. Furniture refuses to stay put, a flower arrangement is delivered, apparently from Sally’s imaginary friend, and you can never quite get your bearings on who is telling the truth and what is actually real. Other times, it is a humor that will have you in stitches—like when Stanley and Shax, the family’s cat, attempt (and fail) to capture a bat flying around the living room.

So yes, these are family stories, but they are pure Shirley Jackson: hilarious, unnerving, and wry. She tunnels in on the tiny details that make up a life, creating a dynamic and expansive view of her world: balancing the needs of four children and a husband, while also being a prolific writer and—crazy as it sounds—a person in her own right.

The books give a picture not just of Jackson’s personal life, but of what life was like to be a woman in the ’40s and ’50s. What’s truly unsettling about Jackson’s writing is the way she perfectly skewers societal expectations. On the surface, Jackson chuckles over an inept husband, a car that won’t start, and missing sneakers. In between the lines you’ll notice a searing commentary on the life of a “housewife” when women shouldered most (read: all) of the child-rearing and housekeeping duties.

When she checks in at the hospital for her third pregnancy, she has a difficult time with the receptionist filling out her intake form:

She lets this little anecdote speak for itself, moving briskly on to a hazy and drawn out childbirth. But these lines stuck with me. They are so evocative of the difficulty women had (and still have) of being taken seriously. In her lifetime, Jackson published six novels, about a hundred short stories, two memoirs, and three children’s books. Remember this as you’re reading. Marvel at how she managed to write prolifically, raise four children, and be a “housewife.”

In the end, what I love about Life Among the Savages and Raising Demons is how they manage to be both compulsively readable slice-of-life stories and social commentary. As usual, Jackson draws you in expecting one thing, spins you around and presents you another. There are dishes and dirty laundry, but also magic and intrigue. These books are as funny as they are sharp, and I hope we’ll start referencing them as often as we do “The Lottery.”

(2) Think of these two books as memoir in the loosest of terms; as biographer Ruth Franklin writes in Shirley Jackson: A Rather Haunted Life, the writing “straddles the line between fiction and fact; it is autobiographical but not necessarily true.” But then again what memoirs can claim they’re just the facts?

(3) from Shirley Jackson: A Rather Haunted Life by Ruth Franklin