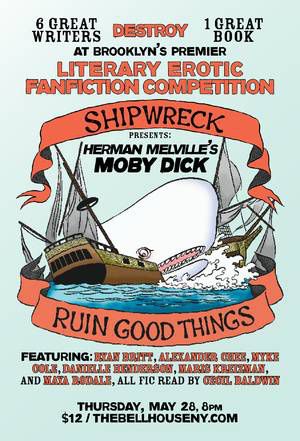 Shipping, initially derived from the word relationship, is the desire by fans of two people, either real-life celebrities or fictional characters, to be in a relationship, romantic or otherwise. It is considered a general term for fans’ emotional involvement with the ongoing development of a relationship in a work of fiction.

It is also a popular past-time here at Riot headquarters, and since Shipwreck is coming up we thought we’ve give you a peek at our own personal favorites. Warning: contains a mild spoiler for The Bone Clocks.

Hermione & Draco, Harry Potter: Because getting from I HATE YOU to I LOVE YOU is the best. And also that boy needs a sensible woman to teach him the error of his ways. And think of all the do-gooder-ing Hermione could do with the Malfoy family money!

The Intrepid: Not only is it a WWII aircraft carrier but it’s now a museum with an actual SPACESHIP on board. Double ship OMG.

Jo & Laurie, Little Women: Let’s be real here — Amy is a) too young for Laurie, and b) JO IS OBVIOUSLY SUPERIOR. J+L is a childhood love that deserves to last forever.

Gimli & Legolas, Lord of the Rings: Noelle Stevenson has already made it canon for The Broship of the Ring so ‘nuff said.

Peter & Wendy, Peter Pan: It’s sweet and innocent, but also THEY ARE THE CUTEST.

Lookfar, from Earthsea: If there’s a better boat in the world than Lookfar, I’m a monkey’s uncle. A magical sailboat that has its own eyes painted on the prow, imbued with love by a cured old fisherman? A boat that will take you to the edge of the world and back again, keeping you safe from rock and reef? No competition.

Gene & Finny, A Separate Peace: Read this in high school and spent the whole time asking, “WHY AREN’T THEY KISSING YET?!” The tension was palpable.

Tonks & Fred/George Weasley, Harry Potter: I’d like to think that before she falls for Lupin, Tonks she spends a wild summer teaching the Weasley boys about life. Catch is that she thinks she’s only having it off with one of them, when they’ve been taking turns all along. Once she realizes their trickery, she decides it’s only older men from that point on. Enter the werewolf.

Effie Trinket & Haymitch, The Hunger Games: You just know that during all that traveling, these two absolutely ended up in each others’ bunks. It’s not true love, it’s not forever — it’s two consenting adults stuck in Katniss’ orbit, and sometimes Effie feels like slumming it.

Charlotte the Spider & Mrs. Frisby of NIMH: These two were meant to be besties, sitting in little tiny anatomically-appropriate rocking chairs, telling stories from back in the day. They’re finally able to relax, knowing all their babies are safe.

Bella from Twilight & Any Non-Supernatural Man: Bella actually goes to college. She graduates and has been working on her own for almost a decade and has done a lot of good work in therapy. Welcome to healthy adult relationships, Bella!

Festus, Heroes of Olympus: Leo’s boat-that-is-alive is sassy and supportive. What more can you ask for from a flying ship??

Ginny & Luna, Harry Potter: Because Ginny is the first of the Potter entourage to realize how cool Luna is, and they would understand each other.

George & Bess, Nancy Drew: I can’t be the only one who believes that while Nancy was off having some of her crazier hijinks, George and Bess were drinking milkshakes and holding hands. Can I?

Percy & Nico, Heroes of Olympus: I know, I know, Percabeth, BUT! Nico’s crush on Percy is so perfect (who wouldn’t have a crush on Percy? He’s so cute and dopey!) that I totally want him to get his.

Anna Karenina & Pietro Maximoff (overarching Marvel Universe): Because everyone could use a happy story in Tsarist Russia featuring lots of snarky flirting and nobody dying under trains.

Zero & Stanley, Holes by Louis Sachar: There are parallels with Stanley’s no-good-dirty-rotten-pig-stealing great-great-grandfather and Zero’s great-great-grandmother, and besides, they’re supportive of each other when no one else is.

Neville Longbottom and Luna Lovegood, Harry Potter: Canon hints at this pairing, but it never actually happens, which is a real shame. They were obviously made for each other. I fear that Luna will never find someone as sweet, kind, thoughtful, and secretly heroic as Neville. And Luna would, of course, help keep Neville calm. He has a tendency to get excited.

Holly Sykes & Hugo Lamb, The Bone Clocks: What if Hugo hadn’t gotten in that car? I mean. I also want that story. (Even though The Bone Clocks is pretty much perfect.)

Alright folks, let’s hear it — what are your ships?