Sherlock Holmes is one of the most well-known literary characters, and while “Elementary, my dear Watson” is his most famous piece of dialogue, this specific phrase was not written by Arthur Conan Doyle, nor is it featured in any of the books. One of the first times this dialogue, as it is, appeared, was in P.G. Wodehouse’s book, Psmith, Journalist, and it has since been commonly used in many movies. Here are a few Sherlock Holmes quotes, however, written by the hand of Arthur Conan Doyle, which we can find in the tales of the famous boffin. 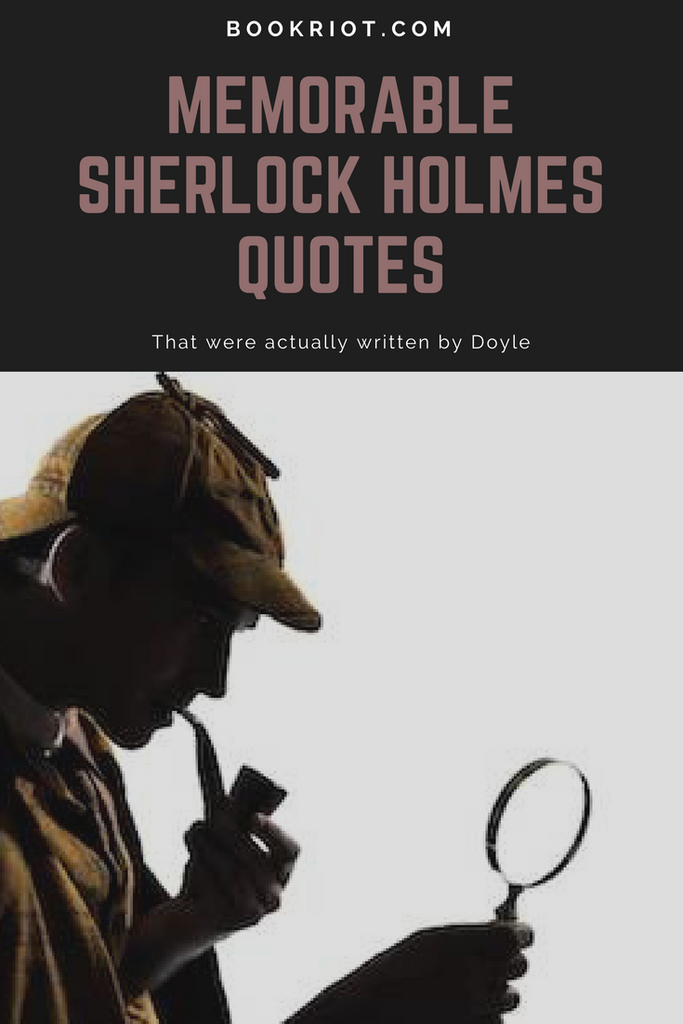 A Study in Scarlet Quotes

“Let me see—what are my other shortcomings? I get in the dumps at times, and don’t open my mouth for days on end. You must not think I am sulky when I do that. Just let me alone, and I’ll soon be right. What have you to confess now? It’s just as well for two fellows to know the worst of one another before they begin to live together.”

“What you do in this world is a matter of no consequence. The question is what can you make people believe you have done.”

“No man burdens his mind with small matters unless he has some very good reason for doing so.”

“’It’s quite exciting,’ said Sherlock Holmes, with a yawn.”

“To a great mind, nothing is little.”

“What is out of the common is usually a guide rather than a hindrance.”

“Desultory readers are seldom remarkable for the exactness of their learning.”

“That head of yours should be for use as well as ornament.”

The Adventure of the Blue Carbuncle Quotes

“My name is Sherlock Holmes. It is my business to know what other people do not know.”

A Case of Identity Quotes

“Life is infinitely stranger than anything which the mind of man could invent.”

The Adventure of the Copper Beeches Quotes

“Crime is common. Logic is rare. Therefore it is upon the logic rather than upon the crime that you should dwell.”

“A man always finds it hard to realize that he may have finally lost a woman’s love, however badly he may have treated her.”

The Case-Book of Sherlock Holmes Quotes

“Your life is not your own. Keep your hands off it.”

The Man With the Twisted Lip Quotes

“You have a grand gift for silence, Watson. It makes you quite invaluable as a companion.”

“But it is better to learn wisdom late than never to learn it at all.”

The Memoirs of Sherlock Holmes Quotes

“In my inmost heart I believed that I could succeed where others failed, and now I had the opportunity to test myself.”

The Adventure of the Dying Detective Quotes

“The best way of successfully acting a part is to be it.”

“My horror at his crimes was lost in my admiration at his skill.”

A Scandal in Bohemia Quotes

“You see, but you do not observe.”

The Adventure of the Creeping Man Quotes

“Come at once if convenient—if inconvenient come all the same.

The Adventure of Wisteria Lodge Quotes

“There is but one step from the grotesque to the horrible.”

“My mind is like a racing engine, tearing itself to pieces because it is not connected up with the work for which it was built. Life is commonplace; the papers are sterile; audacity and romance seem to have passed forever from the criminal world. Can you ask me, then, whether I am ready to look into any new problem, however trivial it may prove?”

“How often have I said to you that when you have eliminated the impossible, whatever remains, however improbable, must be the truth?”

“My mind rebels at stagnation. Give me problems, give me work, give me the most abstruse cryptogram, or the most intricate analysis, and I am in my own proper atmosphere. I can dispense with artificial stimulants. But I abhor the dull routine of existence. I crave for mental exaltation. That is why I have chosen my own particular profession, or rather created it, for I am the only one in the world.”

“A strange enigma is man.”

The Hound of the Baskervilles Quotes

Watson: “You may be right.”

Holmes: “The probability lies in that direction.”

“There is nothing more deceptive than an obvious fact.”

The Adventure of the Naval Treaty Quotes

“It is fortunate for this community that I am not a criminal.”

The Adventure of the Devil’s Foot Quotes

“I fear that if the matter is beyond humanity, it is certainly beyond me.”

The Adventure of the Abbey Grange Quotes

“The game is afoot.”

What are your favorite Sherlock Holmes quotes?