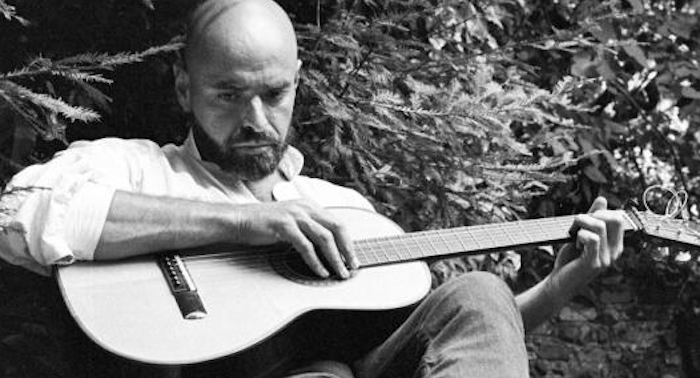 Was it common to be kept up at night thinking about the photo of Shel Silverstein on the back of his legendary children’s book The Giving Tree? It’s hard to say, of course, but if you grew up with that book or any of the other titles by Silverstein as read-alouds in elementary school or library story times, chances are you’ve seen it and it’s a permanent part of your memory.

In addition to The Giving Tree, Silverstein penned other beloved children’s classics in his life and worked with the legendary children’s editor Ursula Nordstrom. Among them are the popular Where The Sidewalk Ends, A Light in the Attic, and The Missing Piece. But before getting his footing in children’s literature, the renowned author had another career: he wrote country music, some of which may be familiar.

Born in Chicago’s Logan Square neighborhood in 1930, Shel Silverstein began his wide-ranging career of words and art when he was drafted into the U.S. Army in 1952. Though he’d grown up drawing, it wasn’t because he thought he was innately talented. Rather, as he told Publishers Weekly, he turned to drawing because he wasn’t a good ball player and wasn’t especially popular with the girls.

“Not much I could do about that. So I started to draw and to write. I was also lucky that I didn’t have anybody to copy, be impressed by. I had developed my own style; I was creating before I knew there was a Thurber, a Benchley, a Price and a Steinberg,” he explained.

Silverstein was expelled from college at the University of Illinois and returned to Chicago’s Academy of Fine Arts, which is when he was drafted. It was in the Army, serving in Japan and Korea, where he took on the role as staff cartoonist for the military’s Stars and Stripes magazine.

Silverstein’s childhood was also filled with country music. Despite talent and passion for it, he didn’t think that singing would be where he landed, and when he found success in cartooning, that’s what he pursued after returning from duty. He sold hotdogs in Chicago while also submitting his cartoons. His work sold to Sports Illustrated, among other publications. Shortly thereafter, he landed a role as lead cartoonist for Playboy magazine.

It was during this period of his life, though, when he started to tinker with writing country music. He wrote, according to his biography at the Country Music Hall of Fame, “quirky, one-of-a-kind folk songs,” and began “performing them in nightclubs with his distinctive raspy voice.”

“Inside Jazz” was Silverstein’s next album, which released in 1962. This one was more folk that the previous album, and it quickly caught the attention of legendary country musician Johnny Cash. Cash loved the song “25 Minutes to Go,” and its dark humorous vibe and recorded a version of it himself.

Silverstein’s voice is raspy and has a old-school folk vibe, and it’s not hard to see the ways in which Cash may have found his work appealing.

In 1969, Cash reached out to Silverstein again, this time to help him write another story song — and it’s one that is certainly familiar: “A Boy Named Sue.”

The song won Best Male Country Performance and Best Country Song at the Grammys. (We will, for the sake of highlighting Silverstein’s contributions to country music, not dig into the followup Silverstein wrote called “Father of a Boy Named Sue,” which is a bizarre and transphobic piece of work unlike the rest of his catalog).

The success of “A Boy Named Sue” meant that Silverstein was being offered even more opportunities to collaborate with some of country’s biggest names. In 1972, Loretta Lynn’s hit “One’s On The Way” was written by Silverstein, as was “The Taker,” a song performed by Waylon Jennings and cowritten with Kris Kristofferson.

“I have an ego, I have ideas, I want to be articulate, to communicate but in my own way. People who say they create only for themselves and don’t care if they’re published…I hate to hear talk like that. If it’s good, it’s too good not to share. That’s the way I feel about my work,” said Silverstein to Publishers Weekly. And indeed, he continued to be the words behind major hits — both within country and beyond.

Bobby Bear formed a long-running creative partnership with Silverstein and in 1973, released an album titled “Bobby Bear Sings Lullabies, Legends, and Lies.” The entire album was comprised of songs by Silverstein, and “Marie Laveau,” was a number one single on the country charts. The album itself spent 30 weeks on the charts.

Bare and Silverstein continued to collaborate until Silverstein’s death in 1999.

Dr. Hook, Brenda Lee, and Johnny Lee Lewis were among other performers with whom Silverstein worked, and when he wasn’t collaborating, he released a number of additional solo albums under his own name, including an album simply called “Fuck ‘Em” in 1970. Musicians including Emmylou Harris recorded versions of his songs, including the popular “Queen of the Silver Dollar,” originally written for Dr. Hook.

In 1998, Silverstein wrote or cowrote nearly every song on the Old Dogs album, all songs about getting old. The group included Waylon Jennings, Mel Tillis, Bobby Bare, and Jerry Reed. “Old Dogs” was one of the last projects Silverstein did before his death five months after the album’s release.

Bobby Bare and his son Bobby Bare, Junior, produced an album in 2010 titled “Twistable, Turnable Man,” in tribute to Silverstein and his legacy. Numerous contemporary artists, including Andrew Bird and My Morning Jacket, recorded versions of Silverstein songs on the album.

Though many are familiar with only his contributions to children’s literature (or his cartoons or his impact on theater — which isn’t even touched upon here), Silverstein will forever be revered for his mark on country music. In 2002, he was inducted in the Nashville Songwriters Hall of Fame. His biography for the Hall of Fame notes that he was a fast songwriter and a good one, but he only took on projects which excited him.

Indeed, Silverstein’s attitude for flexing his skills across numerous creative industries and belief in sharing his talents are what helped him not just dabble, but succeed as a creative polymath. It’s no question, either, what made him appealing to work with: his humor and perspective on life are precisely why he endures, too, as a legend in children’s literature. His books have sold more than 20 million copies.

Big thanks to the outstanding book Major Labels: A History of Music in Seven Genres by Kelefa Sanneh for sending me down this rabbit hole — if you’re a music fan in any way, shape, or form, it’s a must-read, and each of the smaller anecdotes will lead you down fun, meandering paths of people you thought you knew.