When you’re a kid with an ‘unusual’ name, it can be hard to find a bicycle plate, mug, keychain, or most other tchotchke type things with your name engraved on it. Little Anjali in the book Always Anjali encounters this dilemma when she can’t find a bicycle plate with her name. She asks why her name isn’t “normal,” like everyone else’s.

Author Sheetal Sheth is an acclaimed actress in the United States. Her book, Always Anjali, is about a girl who gets bullied for being ‘different’ and when her parents refuse to change her name, she learns about her roots and finds power in being authentic. Sheetal sat down for an interview with Book Riot, with a pleasant lilt in her voice and good cheer. 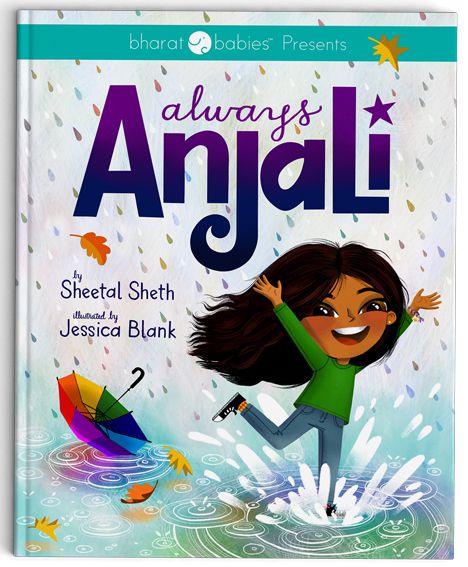 “It’s really about a girl who has to embrace that being an individual is her superpower,” she explains.

Sheetal’s childhood and start to her acting career provided inspiration for the book; she first starred in the film ABCD alongside Aasif Mandvi and Madhur Jaffrey. When first entering the business, she was often asked which of her names she was going to change.

“When I graduated from NYU and started acting professionally, there was so little representation . . .It was shocking to me. The things that were said to me…I was once told “you are the number one choice for this part, but they are uncomfortable with someone of your name playing this part. These things that happen when you’re young, stay with you. It still happens . . .what are we saying? What are we teaching our kids?”

With this reflection, I asked Sheetal if this experience was common-place, the experience of having an unusual name and wishing to change it.

“I have some friends who were bulletproof, but the more common experience was one of agony. Kids are mean and those experiences shape you,” she responds. “Kids will make fun of you in any way. I mean, adults are guilty of it as well. Painting an ethnicity with the same brush. We want to put people in boxes and label them.”

We then talked about Sheetal doing the audiobook for Afterworlds by Scott Westerfeld and voice work on the film Life of Pi directed by Ang Lee. Afterworlds also happens to be one of my favorite books about the American Desi (Indian) experience.

“Scott is a wonderful writer,” she agrees. “When the only people telling POC tales are non-POC, it’s a problem. I’d love to get to a place where we don’t have to have this conversation anymore. Scott writing Darcy [protagonist of Afterworlds]. That’s Scott being special.”

We then talked about Sheetal’s film career, and about the recent allegations that have come out of Hollywood. Bollywood in the meantime may be on the horizon, since they have approached her several times. The conversation turns serious when we discuss harassment and assault.

“It’s been a long time coming,” she says about the allegations and accusations. “And even more so as a woman of color. We’ve been living like this for hundreds of years. I think there’s a lot still to come out . . . But men need to be part of the conversation . .. . Nothing will change unless we have an honest discourse with all parties at the table, willing to hear each other.”

Sheetal believes that we can be allies. That there should be due process and that we need to allow a safe place for people to come forward. She also believes in redemption as long as perpetrators have had consequences for these actions.

“If the people are found to be guilty and serve their time, then they deserve a second chance,” she says. “There also aren’t enough people of color and women in office and in higher positions of power. You can’t have change unless we see it from the top. Optics matter. Five of ten [film executives] should be women. That would be a step towards equal representation.”

Going to a lighter topic, I ask about the journey to publication and how Always Anjali found a place at Bharat Babies.

“We pitched a lot of places. The feedback varied and it was really about finding a partner who shared my vision and understood what I was trying to do,” she explains. “I think lessons are better learned through experience. Stories where you root for the characters. I like the subtle. When I read the feedback from Bharat Babies, I was so pleased that they got the nuance. They made the book better with their thoughts. My conversations with the Bharat Babies team excited me. By the way, they’re also all women and they’re hungry. They are willing to roll up their sleeves and do the work. In fact, they were already doing it. I love that energy.

Sheetal has also said there will be a series about Anjali, with Always Anjali being the first. She has the first 4 books mapped out.

“It’s very important to me to have created a character like her. A lot of books [about South Asians] focus on a holiday, religion, or arranged marriage. I wanted to create a character that was just a girl. It’s not just about her race. Why can’t all those books about a kid and their dog be a brown kid?

It started with me curating books for my oldest daughter. You see all these great books and series, but rarely are they centered around a girl of color. We need to hear our stories, we need to see ourselves in books.”

When ask how writing compares to acting, she responds, “Finding the best way to tell the story is the most important thing. Being truthful. Which is very much what I do in my acting life. I like writing and the collaboration with a great team. I loved working through the illustrations with the talented artist on the book, Jessica Blank. And I welcome critical, productive feedback. Then book is better for it.”

I ask Sheetal how she thinks Desi authors can do better at telling their stories, and to increase their presence in American literature.

“I don’t think separating ourselves is helpful. Calling ourselves ‘Desi’ authors. I also think we need to be more organized and supportive. The way we present ourselves, and talk about ourselves, is important. Pitch to companies who align with your vision. But we need to be given the opportunity to be covered, a chance in the marketplace. Give the audience more credit- they want inclusive stories. I know we want our kids to be seeing the full diversity of the world in books. We need to have conversations about bullying, race, and identity- young.”

To close off our interview, I asked Sheetal what her ideal book for a growing Indian girl would be.

“I’m still figuring that out myself,” she admits. “I’m cultivating a library of books for myself and my girls. It’s all about the narrative and the images. And presenting a broad array of characters and experience from different backgrounds and perspectives. Normalizing the inclusive. And if you tell me ‘this is a great book for a girl,’ I’ll probably chuckle and move on. That language makes me crazy.” It’s a question that will remain ongoing, to fill our libraries with books meant for our children and to help them grow.

Always Anjali will enter the world on May 12 2018. Be sure to preorder or pick up a copy!